Casper scored an all-around 37.975 to edge Rockford senior Nicole Coughlin by 75 hundredths of a point in the most dominant Division 1 Finals performance since Grand Ledge’s Meghan McWhorter also won all-around and three individual apparatuses in 2008.

“It’s really exciting because it was my first year on high school, and I couldn’t have finished any better than I did,” Casper said. “It was a lot less pressure for me (than club), so it was kinda just more for fun.” 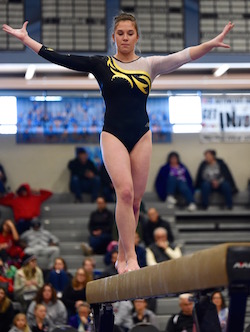 Casper tied for second, with Coughlin, at the prestigious Canton Invitational at the start of February. That meet frequently is an indicator of which gymnasts will contend for MHSAA titles a month later, and Casper managed her high standing despite falling twice that day.

She said she was most proud of her floor routine Saturday, and for good reason – her score tied for third-highest in Division 1 Finals history. Her vault score tied for 15th highest on the MHSAA Finals record book list for that event.

Coughlin, who finished fifth and third, respectively, over the previous two seasons, won balance beam with a 9.500. A day after leading Rockford to its third straight team championship, Coughlin capped her high school career with a personal-best all-around score of 37.900. The beam championship also was her second straight on that apparatus.

She and Casper finished seven tenths of a point better than the rest of the field.

“I was just really proud of our team still from (Friday), so we just tried to carry that same energy into today,” Coughlin said. “I just wanted to come in and hit all four routines, and I did, so I’m super proud of that.”

In Division 2, Farmington United junior Elisa Bills took the next step after missing out on the 2016 championship by only three tenths of a point.

Competing in part against a Farmington lineup filled with strong Division 2 teammates, Bills hadn’t finished first in an all-around competition this winter. But she got her first place when it counted most, scoring a 37.550, which tied for fifth-highest in Division 2 Finals history. 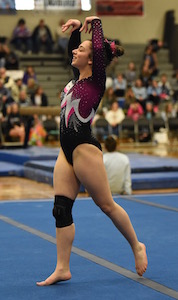 Bills’ all-around score would’ve placed third in Division 1 and cleared the field by 0.825 points. Howell senior Alyssa Walker (36.725) and Livonia Blue senior Jessica Weak (36.675) finished second and third all-around, respectively. Both of their scores were high enough to also make the MHSAA Finals record book for Division 2. Weak also repeated as bars champion with a score of 9.325, three tenths of a point higher than her winning score in 2016.