GRAND RAPIDS – The MHSAA Division 2 Competitive Cheer Final came down Saturday to the top two ranked teams at the end of the regular season.

Gibraltar Carlson can almost claim a permanent home in the top spot.

No. 2 Dearborn Divine Child put on the pressure at the Grand Rapids Delta Plex. But the Marauders tied Divine Child with the meet’s highest Round 3 score to hold on to a 2.9 point advantage and claim their fourth championship in five seasons with a final score of 807.3944. 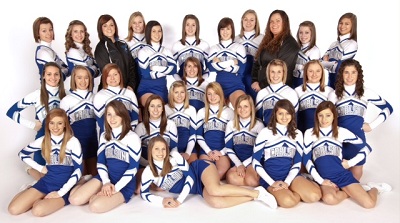 “Our team is so close. We’re more of a family. We’re with each other nine months of the year through sideline and competitive, and they’re my sisters and my family. I have 24 sisters and a couple of moms with my coaches.”

Those coaches – Christina Wilson and Danielle Jokela – had to guide the Marauders through their toughest championship run since 2008 (not counting 2010, when Carlson finished runner-up to Allen Park.

The Marauders scored the meet’s top Round 1 and 2 scores, but still had to hang in for that Round 3 tie.
“It was not easy for us to come out on top today. We had to fight it out,” Wilson said.


Jokela added, “We have nine seniors who really contributed to making this come true.”

Richmond began this season as a continuation of last, when the Blue Devils courageously finished Division 3 runner-up despite losing an athlete to a torn knee ligament five minutes into Finals warm-up. 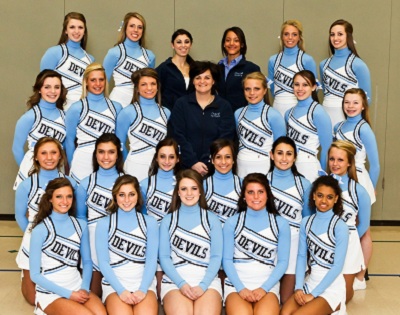 Top-ranked all season, the Devils succeeded in not starting over – complete with prepping in the same Delta Plex locker room Saturday as in 2011 and warming up on the same mat where their teammate was injured.

“Last year when one of our girls was injured, we fell back a little in the third round and that’s why we came in second,” Richmond senior Alana Timmerman said. “But this year we conquered our fears and took over. … We’re really a superstitious team, but we had to face that.”

No problem. Richmond posted the top Division 3 score in all three rounds to claim its first MHSAA title with a score of 781.838 – 16 points better than runner-up and reigning champion Comstock Park.

“Third, third, second, first. What more could you ask for?” said senior Kelsey Kasom, listing off the Devils’ Final finishes of the last four seasons. “We’ve pretty much taken everything, gone through every single thing a team doesn’t want to go through and need to go through to get where we are.”

“All year, we’ve been doing our best to critique the little things. We’ve been working on every little step,” senior Melissa Graham added. “We came into this year and said we were going to start off where we left off last year. So we weren’t coming in with a new team and a new mindset. We wanted to start where our skills were last year and work to get better.”

Michigan Center senior Michaela Haller spoke Saturday of a rough patch her team went through when she was a sophomore in 2010 – the season the Cardinals took only third place at the MHSAA Finals.

But compared to how her team fared her other three seasons, that sentiment is understandable. 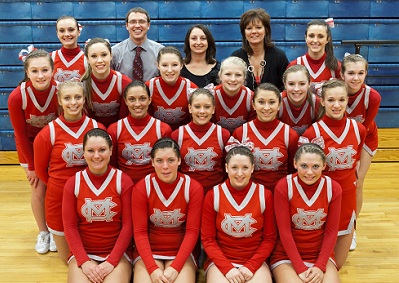 Haller and eight other seniors capped off an incredible run by claiming their third Division 4 championship in four seasons, this time with a score of 759.944 to finish four points ahead of rival Pewamo-Westphalia. The two finished 1-2 at the District and Regional as well.

“I never dreamed my freshman year, or even after we won freshman year, that we’d do it two more times or that I’d leave being a state champion,” Haller said. “We went through a rough patch sophomore year, and after that my team just grew. Since then, every day we just get stronger.

“I feel like we definitely worked our way to where we are.”

Michigan Center finished second to Pewamo-Westphalia in both Rounds 1 and 3. But the Cardinals bested the Pirates by eight points in Round 2 to set up a cushion that held to the end.

“I knew they had it in them. … They’re poised, composed, and the experience definitely helps because they’ve been here, know what to expect and know how to get the job done,” Michigan Center coach Jessica Trefry said.

“I have some underclassmen that have stepped up already into leadership positions, are already grooming themselves to be in that position for next year. I really am not worried about leadership; I know it’s going to be there next year.”

Click for full results for all four Finals, and for coverage of Friday’s Division 1 meet.