And the Wildcats had more or less memorized last season’s championship match loss to the Bulldogs. “I watched that game … a lot,” Novi senior Victoria Iacobelli said. “Too many times to count.”

But she and her teammates also were more familiar with the stage of an MHSAA Finals weekend after last year advancing for the first time since 2007. And that made all the difference in reversing last season’s result.

“Obviously last year was a new environment, so there were a lot more nerves coming in,” Iacobelli said. “So we knew this year we had to stay calm and come in with confidence, whether that meant passing well and serving well, or just playing our system and trusting the girls on our team to do what they’ve got to do. And that’s what we did.

“We started strong, and that was a large contributor … confidence.”

Understanding the significance of Saturday, aside from the obvious – Novi winning its first MHSAA title in the sport in only its third trip past the Regionals Final – requires a brief review of last season’s championship match.

Romeo won in five sets after Novi got behind 2-0 and fought back to even. Recently-awarded Miss Volleyball Gia Milana cemented her status as favorite with 29 kills, including six in the final game. 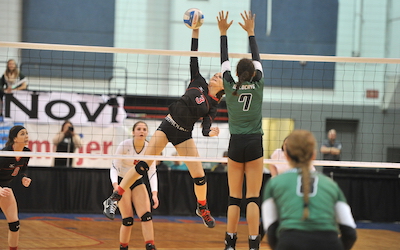 This time, Novi won convincingly the first set before Romeo drew even winning the second. The third set was close, and at the end of the afternoon Milana again had 29 kills including a couple that simply were jaw-dropping – but by the midway point of the fourth set, it was clear Novi was surging toward the decisive finish. Wildcats juniors Ally Cummings and Emmy Robinson combined to block one final Milana attack back across the net for the final point.

“There’s obviously a little more motivation coming in from last year. (A rematch) wasn’t necessarily on our minds through the postseason, but I know as soon as Thursday was over and Romeo was our opponent, there was a lot more motivation,” Iacobelli said.

Milana’s kills will again tie for sixth most in an MHSAA Final during the rally scoring era that began in 2004-05. But Novi senior Paulina Iacobelli also will make the list with 20, and she didn't have a hitting error. Cummings had 17 and 21 digs and Victoria Iacobelli added 13 kills and six aces.

Sophomore Erin O’Leary’s 47 assists also tied how many she had in the 2014 match – and again for eighth-most in an MHSAA Final.

Romeo entered the tournament ranked No. 6 and ended 48-8-1. Milana will graduate among the top hitters in MHSAA history with her kills this fall ranking among the top 10 for one season. Senior setter Breanna Olley added 39 assists and 15 digs.

“I’m honestly happy for them because they really deserve it,” Milana said. “We just needed to say ‘No.’ We didn’t say no; we played with them instead of at them. We didn’t go after them. We stepped back and let them take the wheel and do whatever they wanted.”

Novi finished 55-2, its only losses this season to Farmington Hills Mercy, an honorable mention in the final Class A coaches poll, and Class B champion Ann Arbor Gabriel Richard.

“I thought if we played our game that we could defeat them. But they’re teenage girls; you’re never quite sure what you’re going to get and how the nerves are going to play into it, and the emotions,” Novi coach Jennifer Cottrill said. “I was confident in our team and our ability to win, and I’m just happy that they went out and performed the way I know they can.

“That was a tough loss last year. They were just so hungry this year."