ROCKFORD – Allison Tran saw glimpses in January that her soft-spoken junior was on the verge of competing with the elite high school gymnasts in Michigan.

What Tran saw early came to fruition at the MHSAA Individual Finals as Korf – a day after helping the Rams to their first team title since 1989 – posted an all-around score of 37.825 to improve from 18th last season and finish not only first, but ahead of four top-10 placers from a year ago.

“There’s just so many good gymnasts in this state. I don’t believe it’s me,” Korf said. “Watching the last event, a couple people fell. But I still didn’t believe it.

“I’m just too much in my head. (At the start of the season) I’m just like, ‘Nah, it’s not going to be me. There are so many people who are way better. I just went out there and did the gymnastics I’ve done all year.”

But she also took steps this winter to join the contenders – eliminating errors that previously led to slight deductions and adding more difficult skills that allowed her to score a few tenths of a point more.

Korf also took an anchor role during team competitions as the go-to scorer, especially during meets when junior Madi Myers – who finished ninth Saturday and had the team’s top score Friday – wasn’t available because of injuries. Performing in those pressure situations no doubt paid off for Korf on Saturday.

“The thing with Morgan, her nerves always got in her way last year and the year before. She’s grown a lot,” Tran said.

“She just never thought she was going to be there. We saw it for her.”

Only 75 hundredths of a point back was Grosse Pointe United sophomore Isabelle Nguyen, who improved from fifth all-around last season and finished second on bars (9.700) en route to a 37.750 score.

She knew she was in the championship mix, and consistency played a big part – Nguyen and Korf were the only Division 1 competitors to score at least 9.300 on every apparatus.

Nguyen improved more than half a point after scoring 37.125 at the 2014 Finals. And this season's finish should provide nice momentum for another run in 2015.

“I’ll get there. … Practice more, work harder,” Nguyen said. “Last year I was just a freshman, so everything was new to me.”

Korf and Nguyen were followed in the all-around by Grand Ledge junior Rachel Hogan (37.450) – last season’s runner-up – Grosse Pointe United senior and Isabelle’s sister Maria Nguyen (37.225) and then Canton senior Allison Kunz and Rockford sophomore Nicole Coughlin in a tie for fifth at 37.200.

Hogan finished first on vault at 9.800 and floor at 9.700, while Kunz won bars at 9.750 and Jackson Lumen Christi senior Mary Grace Fries won beam at 9.500 and finished seventh all-around at 37.050. Wilson’s vault score tied for second-highest in the event in MHSAA Finals history. 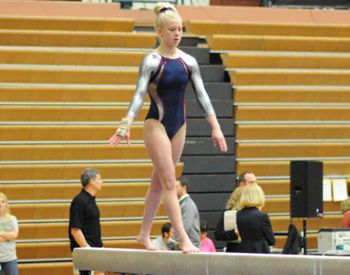 While the race in Division 1 featured a number of contenders, Grand Rapids Forest Hills junior Cassidy Terhorst was the favorite all season for Division 2 after winning that competition last season by 15 hundredths of a point.

“I definitely felt a lot more pressure because last year I was kinda under the radar,” said Terhorst, who will compete in Division 1 as a senior. “There’s a lot more competition this year. There’s a lot of really good gymnasts who were out with injuries last year, and they came back really strong. So I knew I had to work really hard to keep up with them.”

PHOTOS: (Top) Rockford/Sparta junior Morgan Korf finishes her competition on the beam Saturday en route to winning the Division 1 title. (Middle) Forest Hills junior Cassidy Terhorst was part of the final rotation on beam and went on to win the Division 2 title for the second straight season. (Click to see more at HighSchoolSportsScene.com.)