EAST LANSING – Denny Dock remembers looking at his team midway through the regular season and thinking, “We’re on the verge of being something special.”

It turns out, the Stevensville Lakeshore coach in his 25th year was right.

The Lancers overcame a sloppy start and rallied back for a 4-3 win in the MHSAA Division 2 Final against Livonia Ladywood on Saturday at Secchia Stadium at Michigan State University.

“A lot of tears in this trophy,” Dock said. “There were times during the season where we weren’t very good. As we kept playing, as frustrated as I was and as frustrated as they were with me, we never lost to a bad team. Our losses are to good quality teams. I kept saying, if we can just finish a couple of these, we’ve got a chance.”

The Lancers ended the season at 36-9 and leave East Lansing with the school’s seventh softball title.

“This tournament I thought we really played extremely well,” Dock said. “These kids have really pushed themselves. We’ve pushed them to their limit, and some of them we’ve had to back off. It’s been a real up-and-down season, but they’ve worked through it.”

The Blazers scored first, putting up two runs in the first inning, both unearned on two Lakeshore errors.

Christina Meyer was hit by pitch to start the game and Haley Lawrence reached on an error. Haley Thibeault struck out the next batter, but Ladywood pitcher Rozlyn Price reached on a throwing error, scoring Meyer. 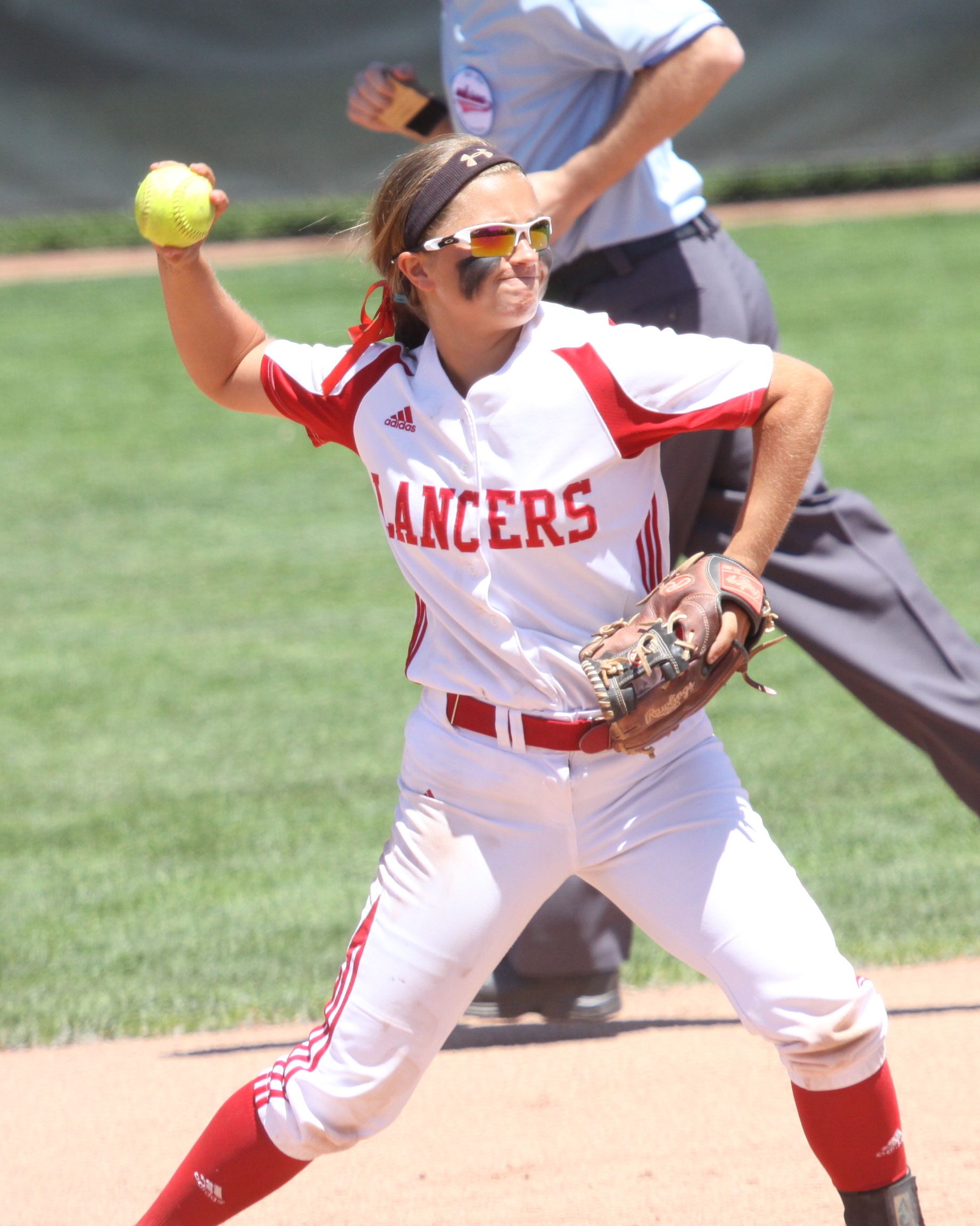 “I can’t repeat what I said to them in the circle,” Dock said with a laugh. “We’ve tried all along to get them to play the game. You don’t play against a team in this game; you play the game. The kids sure found a way.”

Rachel Riedel managed to get the Lancers on the board in the bottom of the fourth inning, smacking the first pitch she saw over the left field fence.

“My coach says once you find your pitch, you swing at it,” Riedel said. “She was throwing good, and when I saw it I knew. I love the first pitch, and I was ready. I felt good and when I hit it, it felt great.

“Not trying to brag, but when we started hitting, our whole team just got up,” she added. “Once one of us hits, I feel like it’s a train. We all start hitting. It’s a great feeling having a team we can trust. “

Rebecca Meyer hit a drive to center to reach base and Mahri Younger subbed in as a pinch runner. Rachel Clem brought her home with a sacrifice bunt to tie the score at 2-all.

“She hid the ball really well, which was harder to see,” Riedel said of Price. “I think we just needed to concentrate more. We were so anxious and ready for this game that when we got here, we were just like we want to swing at everything. Once we got her, it just stuck with us.”

The Blazers (29-14) loaded the bases in the top of the sixth inning, and Rachel Hendrickson’s line drive past third base cut the deficit to one run with two outs and the bases still loaded. But the Blazers couldn’t bring the tying run home.

“With bases loaded in the bottom of the sixth, we needed one hit and we got the bat on the ball. It was just a little too high,” Ladywood coach Scott Combs said. “I can’t be happier. They were feeling a little bit sluggish in the middle of the year when we were like 8-6. We did a wake-up call and got hot and played really well the last six weeks. As you can see, we can play with anybody. If you can come in here and go 4-3 with those guys you can’t be upset.”

Price struck out nine for the Blazers, walking three and giving up five hits in six innings. Hayley Thibeault struck out three, walked two and gave up just three hits.

“In that last inning Haley stuck three or four pitches right where she needed to stick them,” Dock said. “It was a beautiful thing.”