Coldwater High School gymnastics coach Kim Nichols and the many athletes that have been a part of the program over the last decade will probably never fully fathom the impact they’ve had and continue to have on their community.

The scoreboard says it’s been a $79,000 (and counting) contribution to the local fight against cancer. What can’t be calculated are the intangible byproducts of the donations, such as the smiles on patients’ faces as they enjoy more comfortable spaces in which to undergo treatment, or even the social lessons learned by the student-athletes interacting with the business world for the first time.

This Saturday marks 10 years since the Cardinals started the “Stick It For A Cure” charity event, a day full of top-notch competition, fundraising and fun designed to support local folks fighting all types of cancer.

All proceeds from “Stick It For A Cure” raised to date have gone to Coldwater’s local oncology center.

“We really start planning as soon as gymnastics season begins right around October,” Nichols explained. “We start making plans and organizing things. In December we meet once a week with some parent volunteers that want to be on the committee to help. We had a chili supper that we hosted in early December as kind of our kickoff for the event and start (to) the fundraising. The girls served chili and cleaned tables. We did Krispy Kreme donut sales, and the girls delivered them. 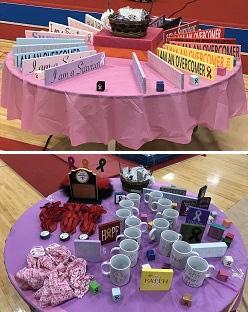 “The big push is getting the girls to go out into the community and canvas the local businesses for donations. We parents organize a lot of it, but I want them to be in the front and involved so they learn how to talk to other adults, how to be responsible, respectful and learning about volunteering and giving back. Oftentimes, they see a direct impact that they have on people. It’s a really good experience. They do a lot. I keep them very busy.”

All of that is in concert with growing a successful gymnastics program.

Participants in arguably the toughest Regional in the state, the Cardinals are still working towards their first appearance as a team at the MHSAA Finals. However, most recently, Leah Goodwin placed 13 overall at the 2019 Division 1 Individual Finals. Layla Schoch was 22nd. More than 20 individuals have qualified for the Finals under Nichols. Kylie Dudek was the Division 1 Finals champion on the uneven bars in 2013, when she also finished all-around runner-up.

Coldwater set a school record for team total points (136.675) last season. The Cardinals have qualified as a team for Regional competition this winter, scheduled for March 7 at Grand Rapids Kenowa Hills.

Nichols points to the support of the school district and local businesses that has helped the gymnastics team flourish.

“I can take some pride in building this program,” Nichols said, “but a big part of it is having gym space, gym time. We started from the classic ‘drag your equipment out of the closet, use half of the court for two hours’ and it would take us 30-45 minutes to set up and 30-45 minutes to tear it down. We’ve been able to get some generous donations from folks in the community that have supported us, and the athletic department has kept us going. We have full equipment now. It’s really cool.”

They’ve more than paid it forward, with at least $12,000 in donations expected from this year’s campaign.

“Everybody knows somebody affected by cancer,” Nichols said.  Many Cardinals gymnasts over the years have had family members affected by cancer, including sophomore McKenna Hantz, whose mother, Mindy, was diagnosed with breast cancer two years ago, is in remission and volunteers for the annual event. Nichols’ grandmother passed away from stomach cancer 10 years ago when they were trying to get the event off the ground.

“I think the community really enjoys it,” McKenna Hantz said. “It’s good to be known as helping the community out and the people who need it. It’s scary, and it’s hard to deal with. These patients get more stuff and money to help them out.”

“I’m amazed that our little team can put that much together from our little community,” Nichols said.

10th Annual Stick It For A Cure