CANTON – Grand Ledge’s gymnasts knew what was at stake as they warmed up for their last rotation of the MHSAA Team Final on Friday.

And they realized how much more would be lost if they didn’t rally one more time this season.

A streak of 92 straight victories over nearly six years had to weigh heavily upon their shoulders. Not that anyone at Plymouth High School could tell from the way the Comets vaulted to finish their run at a sixth-straight MHSAA title.

With Canton – runner-up the last two seasons – waiting to move up if Grand Ledge erred, seniors Lauren Clark and Sara Peltier came back from falls during warm-ups to land vaults of 9.6 and 9.525, respectively. Instead of falling back, the Comets nearly tripled their 1.375-point lead to finish with a score 149.350 and another championship. 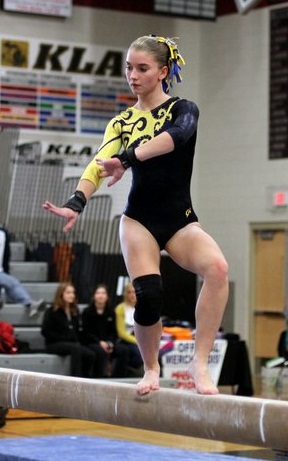 And the Comets have done more than any gymnastics program in MHSAA history.

Grand Ledge became the first to win six straight titles after coming into this season tied with Ludington’s 1975-79 teams for the longest Finals win streak.

With their sixth-straight Division 1 individual champion graduated last spring, and three freshmen entering the lineup this winter, this was the season the Comets were supposed to be nervous.

Instead, they won this Final by their largest margin of the six.

“Our other ones, we had kids who came in with pretty good experience. All we did was up their values so they would score better,” Grand Ledge coach Duane Haring said. “This year we put three freshmen out there. To put freshmen out there to score well, especially against teams like Canton, Farmington, Rockford … I wasn’t sure what we were going to do. I was hoping to get 149s, but that was my goal. I wasn’t sure it was going to be possible.”

But he knew his team would be strong on floor. And he knew they could vault.

Peltier – last season’s Division 2 individual champion – had the high all-around score Friday among those who competed in all four events, with a 38.250. Junior Presley Allison was right behind with a 38.000, followed by freshman Rachel Hogan at 37.250 and Clark at 35.850.

Neither senior experienced a team loss during their high school careers.

“We were really relaxed; last year we were pretty stressed,” Peltier said. “We just knew if we tried our best, everything would be fine.

In finishing runner-up for the third straight season, Canton put up a courageous effort despite falls on beam and bars.

At the end of Jocelyn Moraw’s bars routine, coach John Cunningham leaned in close and told her he was proud of his standout sophomore – who competed with a painfully strained hamstring and a sore back.

“You can’t say that they didn’t gut it out and do the best they could,” Cunningham said. “We just didn’t have a great meet. You can’t (fall) if you want to beat Grand Ledge; they’re just that good."

Canton’s season could be next, as only senior Nicole Lasecki graduates from a team that had two freshmen and two sophomores compete Friday, and had two more freshmen who didn't but regularly have broken 9.0 this season.

Grand Ledge will have a challenge ahead, with the one-two captain punch of Clark and Peltier gone.

“They can do it again if they all just stay together, do what we did this year, and keep their confidence level up and their heads held up high,” Clark said. “They’re a great group of girls, even without me and Sara. And the juniors this year will be great captains next year.”