EAST LANSING – Wildly effective, and his record is deceptive.

Both phrases accurately described Warren DeLaSalle sophomore Nino Puckett as he pitched – and won – the biggest game of his life Thursday.

Puckett entered the Division 1 Semifinal against Traverse City West with more losses than wins this spring – and then put together a pitching line that included seven walks but only two hits as the Pilots advanced with a 3-1 win over the Titans.

In fact, Puckett had just two wins entering the postseason before doubling that total with victories in the District and Regional.

But all of this requires some additional perspective – all five of Puckett’s losses came in Detroit Catholic League play, as his team finished only fourth in the Central division while playing a combined nine games against either top-ranked Birmingham Brother Rice or reigning Division 2 champion Orchard Lake St. Mary’s. And he and his teammates certainly benefited from the tough competition.

“We went through our growing pains early on. A great league like we play in, it puts us in a position for games like today to not be able to shy away from the moment,” said DeLaSalle coach Matt Cook, who previously took a team with a sub-.500 record to the Division 1 Final in 2012. “Our guys were loose and having fun. They just keep doing it.”

Puckett and another sophomore, Easton Sikorski, have been the team’s aces this season. Sikorski came in to throw the final inning and get the save Thursday, and he’ll be on the mound Saturday.

Cook let Puckett know Monday that he’d be first up.

“I was just trying to stay calm, do my daily routine,” Puckett said. “I was excited to pitch this game.

But Puckett wasn’t rattled. In fact, he didn’t give up another hit.

Sophomore Jake Badalamenti, meanwhile, continued to up the reputation of the Class of 2019 with a two-run single to give the Pilots a 2-1 lead in the top of the fourth inning. The seniors added insurance in the sixth inning, when designated hitter Mike Kostuch drove home second baseman Matt Held.

Badalamenti was the only player on either team with multiple hits, reaching safely in both of his at bats. Another shining sophomore, West’s Ryan Hayes, struck out four and gave up only six hits in tossing a complete game for the Titans, who were playing in an MHSAA Semifinal for the first time.

West, ranked No. 9 heading into the postseason, beat two top-four teams on the way to East Lansing.

“We broke a lot of records this year. Winning 41 games, they’ve just competed this whole tournament, all year long,” West coach Matt Bocian said, “I have to tip my cap to my players for not giving up all day today, and all tournament.”

Add champion slayer to his body of work as well. 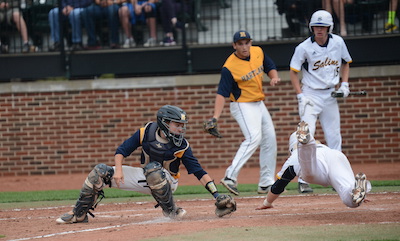 One run had scored and the bases were loaded when Nelson came into the game with two outs in the third inning and got a strikeout to end the Eagles’ rally.

"This is the third time this baseball tournament that I’ve come in with the bases loaded. I’ve become used to it, but it’s always stressful,” Nelson said. “But I was just glad that I was able to have the opportunity to help my team win a Semifinal and go to the state championship.”

Saline (35-6) took a 2-0 lead in the second inning, but Hartland edged back over the next few with a run in the third and two in the top of the fifth. Nelson’s sacrifice brought home the first of three Saline runs that put the Hornets ahead and then the game out of reach in the sixth inning.

Hartland senior John Baker, a star of last season’s championship run, had two hits and drove in a run for the No. 10 Eagles (36-6-1).

Last year’s title was the first for Hartland, and Saline is seeking the same. The Hornets have played in four championship games previously, and most recently in 2010, but have yet to end victorious.

“We’re forgetting about that,” Nelson said, “and we’re going to win a state title.”