PLYMOUTH — Carter Elrod’s contributions in the final seconds of the MHSAA Division 3 championship hockey game won’t show up in the box score.

What will show up in the records from here on out is that Detroit Country Day is the 2017-18 Division 3 champion because Elrod sacrificed his body for the cause.

The senior forward blocked two shots in the final seconds, including a prime opportunity just before the buzzer, to preserve Country Day’s 2-1 victory over Livonia Churchill on Saturday at USA Hockey Arena.

It’s a dirty, often dangerous job, which Elrod does unflinchingly.

“Earlier in the season, I broke my hand blocking a shot,” Elrod said. “It’s a thing Coach stresses every day that we have to do to win games. Every time we go out there, we don’t think, we just go out there and block the shot.”

If shots get to the net, Country Day has one of the best goaltenders in the state to clean up the mess. Junior Sam Evola stopped 30 of the 31 shots he faced, but appreciated not having to face a 32nd shot when Churchill’s Conor Burnette had a glorious chance in the high slot in the final seconds.

“A lot of it is guys like him blocking shots out of nowhere,” said Evola, who had a 1.00 goals-against average and .953 save percentage during the regular season. “I think they might have scored if he hadn’t blocked that one shot; I didn’t see it.”

Churchill was trying to become the second team this weekend to force overtime after trailing 2-0. Traverse City West did it against Saginaw Heritage in the Division 1 Semifinals, only to lose, 3-2.

Seth Kucharczyk’s goal with 7:53 left in the game got the Chargers within a goal. They kept pressing with their goaltender pulled at the end, but couldn’t get a puck past Evola — or Elrod.

“This guy could definitely have more points, but he does so much,” Country Day coach Frank Novock said. “People who know hockey know how important he is out there, blocking shots, winning face-offs, penalty killing, getting pucks. In the first period, he was probably our only forward going, how hard he was working. It kind of caught on a little bit. Night in and night out, his work ethic and determination were amazing.”

After losing in the Quarterfinals the last two seasons, Country Day won its first MHSAA hockey championship since 1981 by holding six postseason opponents to a combined five goals.

It was the longest stretch between championships among past MHSAA title winners, eclipsing the 22 years between Grosse Pointe Woods University Liggett’s 1990 and 2012 titles. 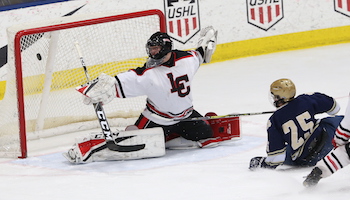 The Yellowjackets (28-2-1) won their last 22 games after losing 3-0 to Liggett on Dec. 16. Upset with his team’s effort that night, Novock had a no-pucks practice two days later.

“We weren’t very good,” he said. “I put 51 minutes on the clock and said, ‘You guys owe me another game, because we didn’t play one Saturday.’ That was the last game we lost all season. The guys didn’t complain; they took their medicine. It was three 17-minute periods they owed me. They just went through it like they did these last 22, so I consider that a win, also.”

The championship game nearly went two full periods without a goal, as Churchill’s Chris Sergison stopped the first 14 shots he faced to do his part in keeping the game scoreless.

Country Day got the break it needed when Mickey VanAntwerp took a pass from Jacob Thomas, split the defense at the blue line and went in on a breakaway. He scored, then crashed into the net, with 38.1 seconds left in the second period.

Tim Stebbins deflected a shot by defenseman Jacob Thomas past Sergison on the power play with 10:53 left in the game to give Country Day a 2-0 lead.

Churchill cut that in half, but couldn’t get the equalizer.

It was the first Finals appearance for the Chargers, who lost in the Quarterfinals after each of their previous six Regional championships.

“The overall experience has really been incredible,” Churchill coach Jason Reynolds said. “The atmosphere has certainly been electric. This is something we’ve been looking forward to. We had an opportunity to kind of embrace it and get our bearings about us (Friday) when we played the game. We were successful there. It was important for us not just to get here, but to get to Saturday.”

Churchill (16-12-3) was 11-11-3 during the regular season, but plays in the tough Kensington Lakes Activities Association. The KLAA had teams in all three championship games, with Brighton playing in Division 1 and Hartland in Division 2.

“I cannot deny how strong our KLAA schedule is year in and year out,” Reynolds said. “A lot of guys are focused on our .500 record, but that .500 record has also been against state-ranked teams over the course of the year. Even if we weren’t coming out guns blazing in November and December, the strength of our schedule has allowed us to build and develop and get better, so hopefully when we’re healthy by playoff time, we’re able to go on a run.”