PLYMOUTH — Sometimes it seems like a given that a hockey player at Bloomfield Hills Cranbrook-Kingswood will win at least one MHSAA championship during his career.

When a program has won nine titles in the last 17 seasons and 16 in the last 35, championships are an expectation for the Cranes.

But it's not always as easy as it may look to outsiders.

Alex Alger took the ice for the final game of his brilliant three-year career with Cranbrook-Kingswood still searching for his first MHSAA championship. He made sure he wouldn't leave the program empty-handed, scoring back-to-back second-period goals in the Cranes' 4-2 victory over Sault Ste. Marie in the Division 3 Final on Saturday at Compuware Arena.

Alger wasn't on the team his freshman year when the Cranes won their last title in 2010. He experienced a 3-1 semifinal loss to Grand Rapids Catholic Central as a sophomore and a 2-1 overtime loss in the regional final to unheralded Marysville as a junior when he made second-team all-state.

"I felt like if we didn't go out on top — you can't say it was a failure, necessarily — but it's just we're always expected to do so well," Alger said. "For me to go three years without a title, I just wouldn't feel comfortable with myself, knowing that with such a strong team we couldn't pull together and make it happen."

Alger not only went out as a champion, but was a standout on a team that is arguably one of the greatest in Cranbrook-Kingswood's rich history. 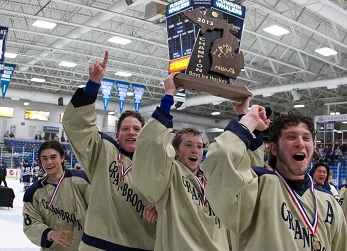 "If it isn't (the best), it's pretty close," Weidenbach said. "I've had two very special teams with really highly skilled players. This is definitely one of our most highly skilled teams."

Sault Ste. Marie gave the Cranes their closest game of the postseason, getting outshot 38-10 in the process. Cranbrook-Kingswood outscored six playoff opponents by a combined score of 47-4.

"At the end of the day, you've got the two best teams in the state here," Sault Ste. Marie coach John Ferroni said. "I've seen most of the D3 teams in the state this year. I feel we're the next-best team.
They're obviously the best team in the state. To be honest with you, I think they're better than Division 2. They obviously can play with the Division 1 teams. They're a wonderful-looking hockey team, just so
poised and mature out there with the puck."

A goal by Austin Alger at 8:11 of the first period and Kevin Shand at 7:23 of the second gave the Cranes a 2-0 lead. Sault Ste. Marie got back in the game at 8:51 of the second on a goal by Alex Teneyck, but
Alex Alger quickly turned the momentum back in Cranbrook-Kingswood's favor with goals at 10:10 and 11:26 to make it a 4-1 game.

Sault Ste. Marie (22-9) added the only goal of the third period when Chase Gamelin scored with 11:26 remaining, but it was the only shot on goal by the Blue Devils during the entire period.

"We had our spurts in the game, but just not enough of them to create offense," Ferroni said. "When you get it close like that, you think maybe we'll get lucky with another shot and score a goal and put some pressure on them, even though the shots on goal were a vast difference. I knew we were going to give up between 30-35 shots. I thought if we could keep the penalties down, that would keep the shots
on goal down. That didn't happen too well for us."

Cranbrook-Kingswood was 1-for-7 on the power play, while Sault Ste. Marie was 0-for-2.

The Cranes have a 16-2 record in MHSAA finals, emerging victorious in their last eight appearances.