A single afternoon in middle school set Skyler Crespo down a path that would lead to four Individual Finals wrestling championships. It was the day he quit the sport.

The withdrawal was brief — only hours, really — but it happened. He ripped his headgear off and stormed out of the practice room, claiming he was done.

And for anyone who knows the Mendon senior, who is less than a week removed from becoming the 28th grappler in Michigan High School Athletic Association history to pull off the rare four-peat, it’s hard to believe.

In a combat sport where confidence is crucial, Crespo certainly hasn’t lacked any since his freshman year. He doesn’t dispute that he’s brash at times, nor does he have any desire to soften his image. After all, the approach he’s used has served him well.

Perhaps it’s because Crespo, who is slated to wrestle at Michigan State University next year, knows how it feels to be utterly humbled – and that he never wants to experience it again. That happened six years ago. And it broke him. It was an experiment conducted by Mendon head coach Caleb Stephenson, who wanted to see what the seventh grader was made of at the time.

Stephenson had two of the program’s top varsity wrestlers, Jonah Grimm and Caleb Hinkle, take turns lighting 90-pound Crespo up. In the past, these mismatched sessions were tame. This time around, Stephenson instructed his accomplished veterans, who had 40 pounds on the youngster, to show no mercy.

“I remember it vividly,” Stephenson said. “It was brutal, man. He cried and he was mentally hurting. To this day, I’m not sure if it was the right thing to do. But I felt he was ready.”

Each time Crespo was taken down, which was often, Stephenson yelled out the increasingly lopsided score. It got ugly.

“From there, we just kind of built him back up,” Stephenson said. “It was a tear-him-down-build-him-up kind of thing. I can remember (Grimm and Hinkle) looking at me like, ‘Is this ok? Are you sure you want us to just go pound this kid again? And the answer was yes. It might have been after that moment that there was real trust. We had a special bond that fostered his great career and a friendship. It has been amazing.”

“There were a lot of times I wanted to quit and didn’t want to practice anymore,” Crespo admitted. “I give a lot of credit to Caleb to make sure I was always on the right track, doing the right things and always pushing me. And, obviously, my parents didn’t let me quit.”

Two years later, Grimm and Hinkle were at The Palace of Auburn Hills when Crespo won his first Division 4 Finals championship at 125 pounds as a freshman.

It was the culmination of a year where there were several signals that Crespo had what it took to make history.

“I don’t think people realize how difficult it was his freshman year to win,” Stephenson said. “He had to go through the state runner-up in the District Final, the returning state champ in the Regional Final and the same kid again in the state Finals — a three-time finalist. Bursting on the scene is exactly what he did, and that’s what we expected him to do.” 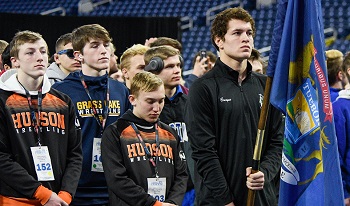 Behind the scenes, Crespo put in the work. Stephenson said he could count on one hand how many times Crespo missed an offseason workout over seven years.

“He was always the one in the room with me,” Stephenson said. “He was the stalwart. He was the backbone. He was the kid that always said yes.”

Winning a 135-pound title as a sophomore, a 4-2 decision over Onaway’s Matthew Grant, got everyone’s attention, but the whispers from doubters ended up being louder to Crespo than the cheers.

“I always kind of had a chip on my shoulder,” Crespo said. “I never thought I got as much respect as I deserved. I always had the mentality that people didn’t believe in me, and I wanted to prove everyone wrong. I used that swagger to help me wrestle better.”

As a junior, he closed out the season with a dominating performance in the 140-pound finals with a 13-0 major decision against Bad Axe’s Ryan Wehner. Last week, Crespo completed his mission with an 11-0 major decision versus Clinton’s Kent McCombs in the 145-pound championship match. During his last two championship runs, Crespo bonused his way through the MHSAA Tournament.

“The more I think about it, the more I can appreciate it,” said Crespo, who finished his high school career with a 211-5 record, a couple of days after the MHSAA Finals. “Anything less than four was going to be a disappointment.”

“Hopefully it creates a standard for people. I think people don’t realize how good of a coach Caleb Stephenson is, really, and how much credit he deserves in all this. I’ll remember the relationship we have as people, not just because of wrestling. He’s just a genuine and good person.”

Even though Crespo fully expected to accomplish his goal, when it happened, it was a bit surreal as he celebrated with his family who had sacrificed a lot to help him get there, and the coaches who had ridden the emotional ride with him.

“It felt pretty good,” Crespo said. “I got to finally relax and feel a little satisfied, I guess.”

“It was really emotional,” Stephenson said. I can’t fathom how special it is. I don’t even know how to explain it to others. This kid has taken me on a really amazing journey. I’m appreciative to him for that. There are only 28 coaches who have gotten to do this, too. I feel special to have been with him. Skyler listened to everything. He soaked it all in. He is incredible like that, and it’s going to be profitable for him at the next level, too.”

A couple of days later, though, Crespo was back to being, well, Crespo, with new goals concerning the BIG Ten and NCAA.

“He texted me (Tuesday) and said, ‘I’m not satisfied,’” Stephenson said. “That’s just who he is.”

PHOTOS: (Top) Mendon's Skyler Crespo takes control during his semifinal win over Leslie's Grant Weber. (Middle) Crespo leads wrestlers onto the Ford Field mats as one of the flag bearers at the Individual Finals. (Click for more from HighSchoolSportsScene.com.)