He had one of his seniors paint “1 point” underneath it. The message was clear.

After losing by a point to Oxford in last season’s championship match, DCC was going to do everything possible to make that point up this winter. They did that Saturday – and a whole lot more.

The top-seeded Shamrocks’ avenged that Oxford loss by taking down the Wildcats 47-9 in easily the most lop-sided of Final matches at Kellogg Arena.

“Our goal was to dominate the whole weekend, and we came out here and did it,” DCC 189-pound senior Kevin Beazley said. “We were excited (to face Oxford). We wanted this matchup. That’s what we were hoping for. We wanted to take care of business.”

The championship was DCC’s ninth and second in three seasons. And as for that dominance, consider:

It’s tough to argue that. But Oxford’s advancement to the Final was impressive in its own right.

Oxford entered Finals weekend as just the No. 6 seed and with half its line-up new coming off last season’s championship. The coach running the show, Brandon Rank, also was in his first season as the head guy after earning a promotion from assistant.

The Wildcats (20-6) knocked out No. 2 seed Brighton and No. 3 seed Davison at Kellogg, after also beating two top-10 teams to win the Regional. Rank said it best: no one expected Oxford to make it to the championship match except for those wearing the team’s navy blue and gold.

“I’m proud of my kids, the way they battled. The two dual meets to get here showed we belonged here,” Rank said. “It was obvious. We belonged here.” 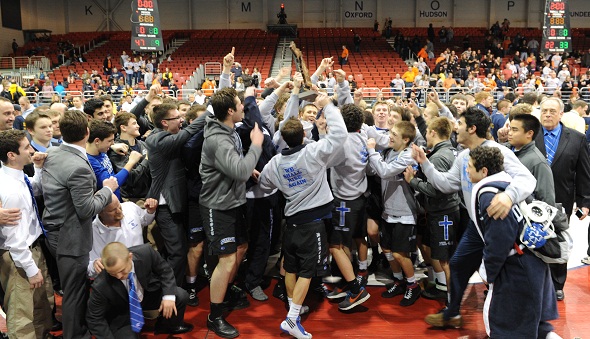