BATTLE CREEK – Hudsonville had scored at least 10 runs in 16 games this season heading into Friday’s Semifinals at Bailey Park. Simply put, the Eagles can hit.

But their performance against Garden City might’ve redefined just how well.

Hudsonville had 18 hits, with at least one from 10 batters, in a 13-3 win over the Cougars that put the Eagles back in the Division 1 Final for the third time in four seasons.

They had scored only two runs in the Regional final win over Muskegon Mona Shores, and a mere four against Swartz Creek in the Quarterfinal.

“It was just motivation. We knew we were a good hitting team, and we wanted to come out here and show what we have,” Hudsonville senior catcher Bethaney Murphey said. “I think we adjusted to the strike zone. It was pretty big, and that made us more aggressive. We just went after it.”

Hudsonville (39-3) will face reigning champion Mattawan in Saturday’s 3 p.m. Final. The Eagles won both the 2010 and 2009 championships before the Wildcats took the title last spring.

Murphey and junior shortstop Danielle Freeman are both hitting better than .500 this season, and they were the toughest outs again Friday. Murphey had three hits and drove in a run, while Freeman also had three hits, drove in three runs and scored twice.

Garden City senior pitcher Kelsey Susalla, a University of Michigan signee, also had three hits. But despite eight strikeouts, she had a tough time cooling the No. 4 Eagles’ bats. 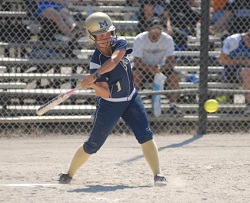 “It takes us once or twice through the line-up to get going. But once we get going, we catch fire,” Hudsonville coach Tom Vruggink said.

The No. 3 Wildcats (33-10) scored early and held off a late rally to return to the championship game.

Mattawan led 5-0 after three innings. But the No. 6 Eagles (36-7) scored twice in the fourth and seventh innings, and the potential tying run was on second base before starting pitcher Stacy Thompson re-entered the circle and got the final two outs of the game.

PHOTOS: (Top) Hudsonville junior Danielle Freeman looks down to home plate as she prepares to score during Friday's Semifinal. (Middle) Mattawan senior Sara Griffith prepares to connect with a pitch in the Wildcats win over White Lake Lakeland.