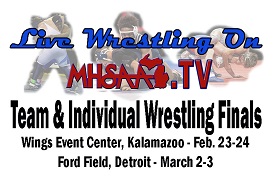 The Red Arrows will be chasing the record for longest streak held by Davison 2002-06 and Hudson 2009-13, and are seeded No. 1 again heading into Friday’s Quarterfinals – but with last season’s runner-up Warren Woods Tower right behind at No. 2.

Below is a look at all eight teams competing in Division 2, listed by seed. Quarterfinal matches begin at 6:45 p.m. Friday, with Semifinals at noon Saturday and the championship match that afternoon at 3:30 p.m. All matches this weekend will be viewable live on a subscription basis on MHSAA.tv. For Friday’s schedule and results throughout, check the MHSAA Wrestling page.