BATTLE CREEK – Briana Combs carried Livonia Ladywood as long as she could Friday before her left knee said no more.

But thanks to the equally heroic relief of sophomore Lauren Hayes, Combs and the Blazers will get a chance Saturday to win their first MHSAA championship.

Combs, the team’s four-year ace, got within two outs of finishing off Wayland Union in Friday’s Division 2 Semifinal. But a knee injury that’s kept her out of practice the last two weeks became just too painful – and Hayes, a rarely-used pitcher who said herself she usually gives up her share of hits, came on to finish the job.

She struck out two batters and Ladywood hung on for a 4-2 win – followed by Combs coming out of the dugout not for the celebration, but to hug her closer.

Ladywood has been to the Semifinals three times over the last four seasons, and Combs was a freshman throwing in the 2009 championship game – a 4-0 loss to Niles.

She struck out five and gave up just six hits Friday before calling to the dugout after getting the first out in the seventh inning. She had a small hobble as she walked around the pitching circle, and her coach and father Scott Combs said he was unsure if she’d be able to pitch in the championship game.

Hayes will be ready. Although she’s thrown fewer than 10 innings this season, she’s been putting in a lot more practice of late to prepare for a situation in which Combs can’t go.

“We’ve been trying massages, trying balms, trying Mr. Miyagi (of “Karate Kid” fame), anything we can,” Scott Combs. “We got six innings out of her. I didn’t think we’d get two or three.”

“We’ve gotta be a bullpen (Saturday). We’ve gotta be a staff. We can’t expect someone to go seven innings. … All we can do is ask for a chance to win the championship. We got that chance.” 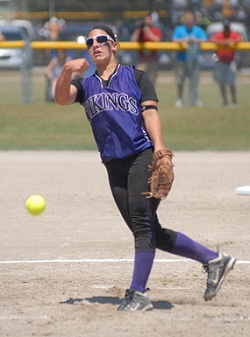 Senior outfielder Heather Pollick’s two-run homer in the fourth inning was enough as the Vikings (37-3) advanced to their first MHSAA championship game since 2002.

Pollick drove in senior shortstop Elizabeth Addy, who had walked to open the inning. Coloma got on the board with a run in the bottom of the sixth, but Swan Valley senior Mackenzie Boehler struck out the side in the seventh to finish the win.

She ended with 15 strikeouts and gave up only two hits, with Coloma’s run unearned. Her Comets counterpart, sophomore Emily Najacht, gave up only four hits and struck out six. Coloma (40-3-1) was making its first Semifinal appearance. Click for a full box score.