But few expected a pitchers dual – broken up only by Beaubien the hitter as Monroe St. Mary Catholic Central earned the opportunity to play for a third straight MHSAA championship.

Beaubien allowed just two hits and struck out 15 Shepherd hitters at Secchia Stadium, and also led off the sixth inning with a triple before scoring the game’s lone run as the top-ranked Kestrels escaped the Bluejays and their pitcher Haley Peska 1-0.

Peska, who no-hit No. 4 Millington in Tuesday’s Quarterfinal, allowed only five hits and struck out six in just about matching the state’s most celebrated hurler of the last three seasons.

“We’ve played a lot of really good teams on our way here this year," Beaubien said. "This is a great example of it – Shepherd’s a team that nobody thought would be in the mix at this point, and they just played a great game and almost beat us.

“(But) the experience of being here has helped us mentally and with our confidence.”

Maybe not the best news for Michigan State’s softball program – Beaubien will continue her career at University of Michigan – but the St. Mary’s ace has given up four hits total in 33 innings pitched at Secchia over the last three seasons. In fact, Friday’s was the first Semifinal in three seasons that she didn’t throw a no-hitter.

Not that giving up two hits made her any less dominating. That was made plain both in the sound the ball made pounding catcher Kenna Garst’s glove on her many fastballs, but also when she ended the game with a strikeout on a floating change-up that no one in East Lansing was expecting.

She’ll finish her high school career with an ERA well south of a run per game and passed 1,300 career strikeouts a while ago.

“This whole run was like, ‘OK, any game could be your last game.’ I know that,” Beaubien said. “Now I know for sure. Tomorrow is my last game. I don’t think it’s really hit me yet. It’s a little weird. I just want to go out there and make my last game of my career end with another state championship.”

The combination of two superb pitching performances made this one fly by in a mere 77 minutes. Freshman rightfielder Samantha Michael did have two hits in two at bats for St. Mary, with junior shortstop Kelsey Barron doubling in that lone run and junior third baseman Danielle Michael notching the team’s other hit.

Senior centerfielder Ryanne McKenna and junior shortstop Kianna Andrews had the hits for Shepherd (25-19), and of course Peska made the most memorable impact for a Bluejays team playing in its first Semifinal since 1997.

“They’ve got two coaches over there (Bobb Servoss and assistant Terry Lynch) that know a lot about the game … and in this game it’s all about keeping hitters off-balance,” St. Mary coach John Morningstar said. “You’re never letting anyone sit on something, and if all you’ve got is speed in this game it’s going to be a long season. Kids will catch up to that hard ball. Moving it around the way (Peska) does, she’s very effective. She had us chasing a lot of pitches that we wouldn’t normally swing at.”

Not that more proof was needed on top of a 36-4 record. But Napoleon’s seniors showed again Friday they’re ready for one last matchup with the St. Mary ace. 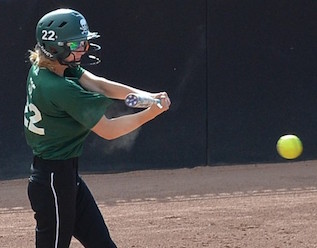 As freshman, they were part of a team that downed Beaubien and St. Mary in a Regional Final. But she and the Kestrels came back to eliminate the Pirates in a Quarterfinal in 2015, and Napoleon didn’t make it out of the District a year ago.

“We have been looking ahead, and saying we’re going to end up meeting Meghan, we're going to meet her,” Napoleon senior shortstop Paige Kortz said. “And just talking and scouting, hearing scouting reports. Of course they probably have with us (too), but just going ahead and figuring out what their weaknesses are, and we’re going to try to hit them tomorrow.”

They seemed to hit everything Friday, especially during the first inning. Napoleon jumped out to an 8-0 lead and finished the game with 19 hits over five innings.

This was the fourth Napoleon team to make Quarterfinals and the first to make Semifinals, meaning of course that Saturday’s championship game also will be a first.

“Especially having eight seniors,” Kortz said, “we at the beginning of this season were determined to be Lansing bound. And determined to make school history.”