EAST LANSING – Tinner Sharon’s chance at an MHSAA title was slipping through her fingers.

After giving up back-to-back home runs in the bottom of the seventh inning to lose a 4-1 lead, Sharon knocked a hit to left field and rounded the bases at full speed on a fielder’s choice by Sadie Strasser to give Gladstone its lead back.

With an injured ankle, Sharon then retired three in the bottom of the eighth inning to secure a 5-4 win over Coloma (34-10) in the Division 3 Semifinal at Secchia Stadium on Friday.

The senior pitcher was carried off the field as her team celebrated its fourth championship game appearance.

“All season we’ve had this motto of ‘never say die,’ and you never know what can happen in the bottom of the seventh, which was very important to (Coloma) today,” Gladstone coach Ashley Hughes said. “Tinner was struggling with her foot today, but she’s one incredible kid and definitely a leader for us.”

But Coloma coach Wendy Goodline knew her team wasn’t completely out of it with Jenna Faultersack and Lexee Summers coming up.

“The two that got us back into it at the end are two of my hardest working girls,” Goodline said. “I’m not surprised that they were able to do that at all.”

Faultersack smacked a two-run homer with two outs in the bottom of the seventh inning, and Summers followed with a solo blast to left field to tie the score at 4-4.

“It was huge, but we had some solid hits throughout the day too that could have been brought in,” Hughes said of the balk. “The game can go either way, so thankfully everything was in our favor today.”

Sharon was able to score on a throwing error by the Comets to get the winning run.

“We thought about putting a runner on for her, but she got on base in the eighth and looked over and was like ‘Nope. That’s not happening,’” Hughes said. “She is just unbelievable. It takes something unbelievable like that to happen, and she was great for us today.”

“She’s one of our quickest people on the field and with her ankle like that, that’s adrenaline, that’s her wanting to win so bad,” Beaudry said.

The Braves scored first in the top of the first inning when Strasser stole home on a missed bunt by Beaudry. They increased the lead to 3-0 when Lexi Hongisto tripled to right field and Beaudry brought her home with a home run to center.

“Nothing has felt better,” Beaudry said. “I can’t even tell you. I didn’t know it was gone at first, but I wanted to get my teammates in and it felt great.”

Coloma’s Katie Scheuer got on base with a hit to center field to start off the bottom of the fourth inning, and Kristin Potter brought her home with a single to right field to make it a two-run game.

Both teams were blanked in the fifth and sixth innings, and it looked like the Braves were going to cruise to the win when Sharon struck out the first two batters in the bottom of the seventh.

“That’s the name of the game,” Beaudry said. “We get some hits, they get some hits. You just have to get that momentum back when they have it.”

Bridget Becker added two hits for the Braves, while Potter tallied two for the Comets.

Sharon struck out seven for the Braves, giving up seven hits and walking four. Coloma pitcher Emily Najacht struck out four, walked two and gave up six hits for the Comets. Click for the full box score.

Rachael Hahn belted a home run to right field in the top of the fourth inning, and Unionville-Sebewaing held off a late rally by Clinton en route to earning a trip to the Division 3 Final.

The Patriots, back in the championship game after finishing runner-up last season, had a 6-1 lead heading into the bottom of the sixth inning but saw it vanish quickly when Clinton’s Megan Nelson and Sarah Turner both smacked two-run homers. 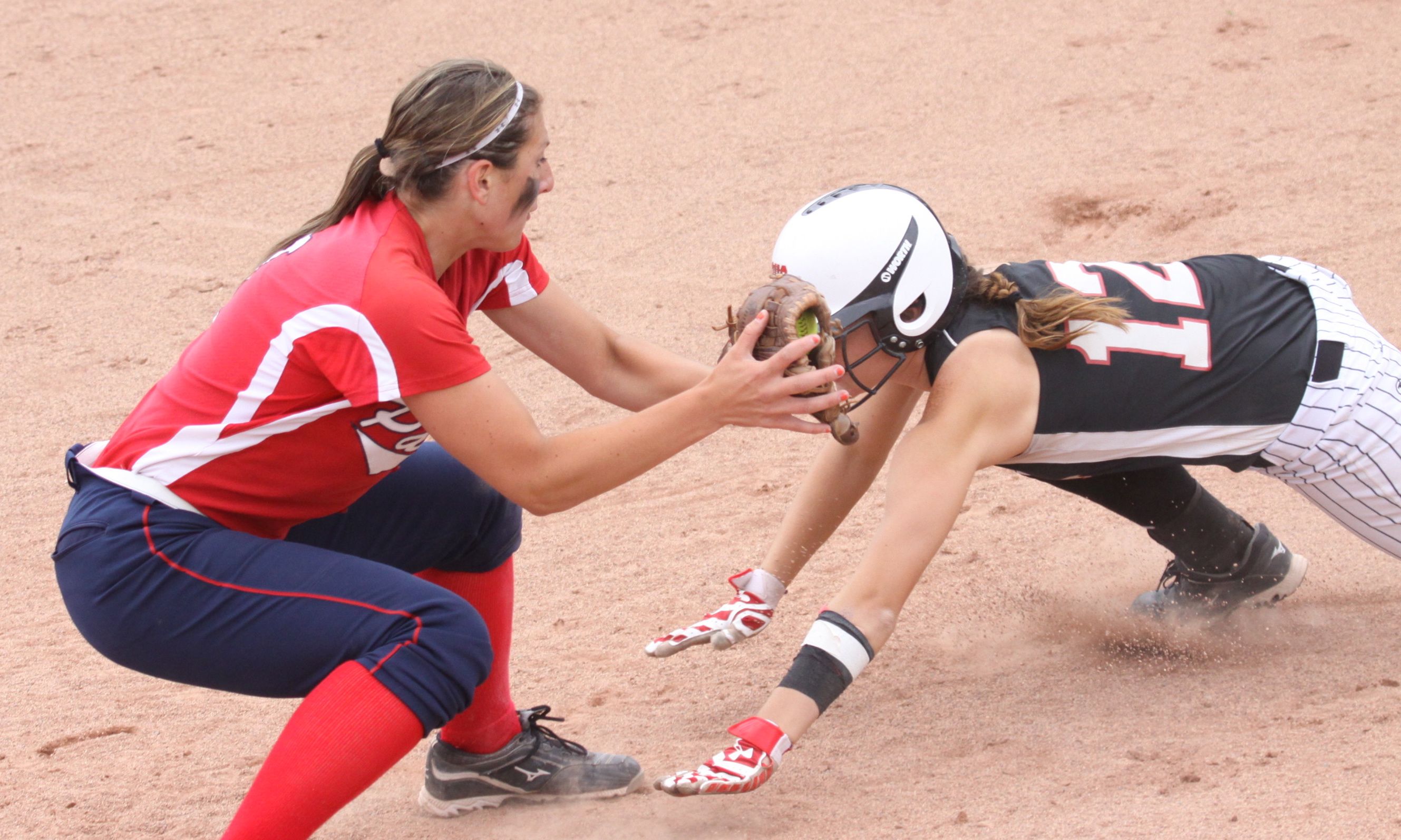 “I think that just gave us more momentum,” Hahn said. “It fired us up. We knew those runs were coming; we just had to go out and get them.”

USA’s Kayla Gremel reached on a Clinton error in the top of the seventh inning and Jennifer Winchell brought her home with a double to deep center to give the Patriots some cushion.

Clinton’s Ashleigh Donahey got a base hit to start the inning for the Redskins, but the Patriots retired the next three to book their ticket for Saturday.

“For me, this is my first time being on the field for a state tournament as a senior. So that was really exciting,” Hahn said. “I think we are doing a lot better this year, and I think it’s because we are closer as a team. We’ve just had a lot of great team chemistry.”

Erica Treiber and Stephanie Neuman both had two hits for the Patriots. Treiber struck out 12 and walked just two from the mound in six innings of work. Nicole Bauer picked up the save.

Donahey had two hits for Clinton. Megan Burton took the loss, striking out six, giving up eight hits and walking one in seven innings of work. Click for the full box score.