It’s all relative, of course, to the fact she’s finishing her Clinton career with a fourth and final trip to the MHSAA Softball Finals.

That first season, 2009, Nelson felt some memorable butterflies. But as she pitched her team into its second straight championship game Friday, those had fled years ago.

Nelson struck out seven and gave up six hits in pitching the top-ranked Redskins to an 8-1 Semifinal win over No. 5 Unionville-Sebewaing, last season’s runner-up in Division 4. She also had a two-run single for the reigning champion, which will face Gladstone in Saturday’s 10 a.m. title game.

“We know what we’re capable of. No offense to anybody; we know we’re the best,” Nelson said. “And we bring that every game..”

Nelson is one of three four-year seniors, along with catcher Abi Clark and shortstop Haley Mercy. Together they played in Semifinals as freshmen and sophomores before helping the Redskins (42-1) to last season’s title.

“The girls that have been here four years in a row, and the juniors for three, they knew what to expect,” Clinton coach Al Roberts said. “It’s a matter of coming out and playing the game the way it’s supposed to be played. 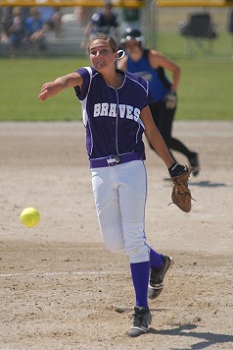 “Tierney on the mound, that means an awful lot, obviously. And beyond that, there’s a whole lot of nucleus there. Abi Clark is a tremendous leader, and Haley Mercy is a tremendous leader, with calm and poise. (She’s) just a coach on the field, (and) without question, one of the best I’ve ever coached as far as having instincts for the game.”

Juniors Tessa Dinsmoore and Elexis Pitcher each had two hits for USA (40-5). Click for a full box score.

Gladstone advanced to its third MHSAA Final and first since winning the title in 2009 by scoring the go-ahead run in the top of the seventh inning.

Senior Katie Becker drove in pinch runner Alexis St. Cyr, after junior Alison Austin opened the inning with the single. Austin then gave up one hit but nothing more in the bottom of the inning to ice the win for the Braves (30-5-1).

Becker and junior catcher Jordan Kowalski each had two hits for Gladstone, and Austin struck out six while giving up five hits.

Springport (39-3-1), which suffered its first loss since late April, took a 3-2 lead after the first inning before Austin came on in relief. Senior third baseman Kelsi Lauer was 3 for 3 for the Spartans, while junior second baseman Hannah Baum had two hits and sophomore catcher Taylor Heisler drove in two runs. Click for a full box score.