EAST LANSING — It never feels like just another game for Unionville-Sebewaing this deep into the MHSAA softball tournament.

Any team made up of high school kids is going to feel some nerves, even if they represent a program that has played in the Semifinals 11 straight years.

"We've been here so many years, but it still feels like the first time," Patriots senior second baseman Kayla Gremel said. "It's still such a surreal experience. We don't take it for granted, that's for sure."

After a slow start, Unionville-Sebewaing heated up and rolled to a 12-3 victory over Morenci in the MHSAA Division 4 Semifinals on Friday at Michigan State University. The Patriots scored eight runs in the fifth and sixth innings after nursing a 4-3 lead through four.

The reigning champion Patriots (35-7) will now move on to their fourth straight championship game and eighth in 11 years against Indian River Inland Lakes (31-3) at 5:30 p.m. Saturday at MSU's Secchia Stadium. Inland Lakes beat Holton, 2-0, in the other Semifinal.

Only four other programs have made the Softball Finals at least four years in a row. Bay City All Saints (1987-91) and Kalamazoo Christian (1996-2000) share the record of five consecutive trips to the Finals. Stevensville Lakeshore (1995-98) and Harper Woods Regina (2004-07) went four consecutive years.

Senior pitcher Nicole Bauer is the only member of the current team to reach four championship games. She will be the starting pitcher for the third year in a row. She played in 28 of the team's 39 games her freshman year, but none after the Districts.

Even Bauer notices a different feeling on the final weekend of the season.

"We had some butterflies, just being on the big stage," Bauer said in explaining the slow start. "We just didn't communicate, but we worked it out in the end. I'm a senior. It's my last time here. I just want to do what I can to help my team win."

Bauer helped Unionville-Sebewaing return to the Final by striking out eight and allowing six hits and no walks as a pitcher. As a batter, she went 2 for 3 with a team-leading three RBI.

"In the summer, I don't really hit, so I kind of lost my swinging," said Bauer, who has signed with Stanford University. "I just got it back."

Unionville-Sebewaing is counting on not only its big-game experience over the years, but its experience against tough competition this season to produce a second straight title.

"We've played against some really good teams who are still here," Patriots coach Steve Bohn said. "We've been in those situations where we've been down 2-1 and have thrown some balls away and had to get some hits."

Unionville-Sebewaing is trying to become more than just a great small-school program. The Patriots lost in Division 3 Finals in 2013 and 2014 before winning in Division 4 last year.

"This season we played better competition, and we've done well against them," Bauer said. "It's so rewarding to play teams that are out of our division, like Division 1 and Division 2 teams."

The Patriots had to lean upon the experience of playing in tough games when Morenci took a 2-1 lead in the second inning on an infield single by Hannah Borton that scored Angela Davis and Mikayla Price.

In the bottom of the second, Bauer drove the ball to the base of the fence in left-center field with the bases loaded to score three runs, giving the Patriots a 4-2 lead.

Borton's third RBI of the game came on a single in the fourth, getting Morenci within 4-3.

The Patriots gave themselves some breathing room with a three-run fifth. The runs scored on a bloop single to center field by Marisa Morton, Alexis Cady's steal of home on a double steal and a single by Brianna Osantowski.

The rout was on in the sixth, as Unionville-Sebewaing put up five more runs. The highlight was a two-run double by Cady.

"I looked halfway through the game," said 44th-year coach Kay Johnson, who coached Morenci to back-to-back Class C championships in 1985 and 1986. "They had a lot of two-out runs. We were just that close."

In contrast to Unionville-Sebewaing, Morenci hadn't played in a Semifinal since 1994. The Bulldogs (25-15) may not have to wait that long to make a return visit, as their starting lineup had three freshmen, three sophomores, two juniors and one senior. Morenci has reached the Quarterfinals three consecutive years.

"It's good to have the experience here," Johnson said. "Even being in the Quarterfinals three years in a row, we weren't afraid to be there. We were used to being there. It would be nice to bring them back again, and they can settle in."

Cloe Mallory had to make do without her favorite bat.

She did just fine. 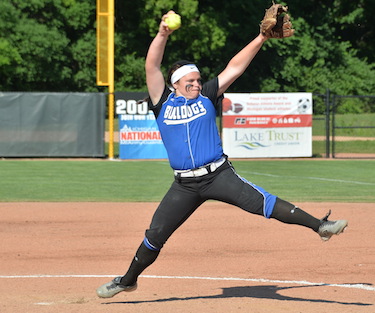 Mallory's primary bat was ruled illegal before the game, as it failed to pass a compression test. Using her backup stick, she slammed a two-run homer over the right-center field fence in the first inning to produce the game's only runs. Precious Delos Santos was on base after getting hit by a pitch.

"I had to switch to my old bat," said Mallory, a junior who is a Central Michigan University commit. "I was just so thankful I could mentally get through that. They (test) because it's states. I tried blocking it out as much as I could."

Mallory made the lead hold up, as she pitched a two-hitter and struck out 13, while not allowing a runner to pass second base. She couldn't have asked for a better start, striking out the side in the top of the first, then producing a two-run bomb in the bottom of the inning.

Holton coach Kirk Younts had pitcher Mikaela Baker intentionally walk Mallory the next two times she came to the plate, even loading the bases with two outs in the fifth.

"I wish I'd have done that the first time, but you've got to go after it a little bit," Younts said. "She single-handedly beat us. She had their runs and struck us out a bunch. She was on, and she's a great player."

It's only the second time than Inland Lakes has reached an MHSAA championship game in any sport. The 1998 baseball team lost to Southgate Aquinas, 9-3, in the Division 4 title game.