On Thursday, the top-ranked Bulldogs downed seven-time title winner Kalamazoo Christian in a Division 4 Semifinal to earn another chance at bringing home the school's first MHSAA championship trophy in any sport since 1979.

Returning its entire hitting lineup from last season’s Finals loss to Unionville-Sebewaing, Inland Lakes slugged its way to a 9-0 victory at Secchia Stadium. The Bulldogs will face No. 8 Ottawa Lake Whiteford at 3 p.m. Saturday with that first title on the line – hoping to follow the girls track & field team that won Inland Lakes’ first and only MHSAA championship in 1979.

“It just shows all of the hard work we’ve put in. Our main group has been together eight, nine years,” Bulldogs senior pitcher Cloe Mallory said. “The family we have in our community, it just really shows.

“There’s so many people talking it up. We’ve just got to stay very humble about it. In northern Michigan, it’s hard to get all these great girls all in the same program, the same years. I’ve been very lucky to have this great group of girls with me throughout my high school career.”

And they’ve been fortunate to have her in the circle, especially over the last two.

In two games at Secchia last season, Mallory threw all 14 innings, giving up one run and eight hits while striking out 17. She returned to Michigan State on Thursday with another shutout, striking out nine while giving up only four hits in going the distance.

And Inland Lakes’ bats have been just as punishing. The nine-run performance took the Bulldogs’ overall postseason score to a combined 84-3 against seven playoff opponents.

Inland Lakes (34-5) jumped out to a 3-0 lead during the top of the first inning and pushed the game further out of reach on Milner’s two-run homer in the fifth.

“That’s the way the girls have been all season. They know they have to jump out early and put the bats to work,” Bulldogs coach Krissi Thompson said. “Like I’ve said all season, my favorite part is watching them hit.”

Kalamazoo Christian was playing in its fourth Semifinal in five seasons and finished 23-18.

A proud and successful Whiteford program has been waiting to get back to the MHSAA Finals. 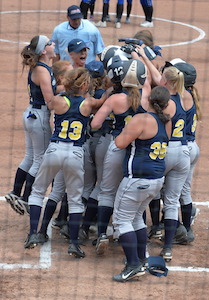 The Bobcats will play in their first title game since 1994, aiming for their first championship since 1987 and fourth overall under 39-season coach Kris Hubbard.

One of only three seniors, centerfielder Erin Manley played a major role in booking that return. Manley drove two home runs – sandwiched, unexpectedly, around a sacrifice bunt – and brought in four runs.

“The past few games haven’t been so good,” Manley said of her hitting, “but my teammates have just been pumping me up. They’re telling me to get a base hit, and that’s what I tried to do.

“Everybody on the team is talking me up, making sure I’m watching (the pitch) all the way through, helping me on the tees and throwing me extra balls in practice, and that’s what really helped.”

Whiteford (33-6) scored three runs in the first inning on Manley’s first homer. After Coleman came back with a run in the second, Whiteford sophomore pitcher Lindsey Walker didn’t allow another hit until the seventh inning.

Junior shortstop Autumn Tubbs had hits in both of her at bats and scored the lone run for No. 5 Coleman (35-7), which was making a second straight Semifinal appearance.

The win was quite a follow-up after Whiteford downed reigning champion and No. 2-ranked Unionville-Sebewaing in Tuesday’s Quarterfinal – and after losing to USA in the Quarterfinal a year ago.

“I think it’s our attitude, effort, every single day on and off the field that makes us good,” Manley said. “Last year we didn’t have any seniors; it was six freshmen and three juniors, and that was our team. We knew we had a good team, and we lost in the Quarterfinals. The goal was to get to state championships this year, and that’s what we’ve been working for.”