The senior pitcher let everyone know that wasn’t going to scare her team Friday afternoon as the Comets booked their second straight trip to the MHSAA Division 4 Final with a 6-1 win over Vestaburg (27-9) at Secchia Stadium at Michigan State University.

“Everyone is out to get us, but we are here,” VanDam said after Kalamazoo Christian's Semifinal win. “We are ready to play and beat whoever we got.”

VanDam gave up just four hits, striking out 12, walking one and giving up just one run, the first run of the postseason for the defending champs.

The Comets (28-16) – who will face Rogers City in Saturday’s championship game – scored two runs in the bottom of the first inning on two Vestaburg errors, but added to that significantly in the third inning.

Morgan Locker singled to start the rally, and Tori Sides helped the cause with a hit to left-center. The Wolverines got the first out on a fielder’s choice by Kara Gjeltema. But VanDam followed up with a fielder’s choice that moved the runners ahead; Locker was able to avoid the tag at home plate to make the score 3-0.

“It never happens for me. I was so excited,” Lemmer said. “I just wanted to help my team and make a difference.

“It was really important for us to get some momentum,” she added. “Everyone was nervous we would get down, but we all really knew we could do it, and everyone was just pumping each other up. Our team gets pumped up easily, and that’s what I love about them.”

Karigan Gates was about a quarter inch from a home run for Vestaburg, smacking one to left -enter field in the top of the fourth that bounced off the fence and back in to fair territory. Akisha Benavidez brought Gates home with a single to center field that made the score 6-1.

Both teams were blanked the rest of the way.

“It was timely hitting, but they did give us some errors out there that gave us some base runners,” Kalamazoo coach Terry Reynolds said. “We got a couple nice hits. That’s what we do. It seems if we get a key hit, it seems we get them in clusters. I thought today it would be one at a time and we were prepared for a small game, but it was good we were able to capitalize.”

The Comets have seven MHSAA softball titles and two runner-up finishes. Reynolds is hoping to add another in his first year as coach.

“Taking over there is a little bit of pressure,” Reynolds said with a laugh. “Everyone expects me to win. The girls have come back and worked hard. I couldn’t have asked for anything more.”

“Rebekah has really worked hard this year,” he said. “She has changed physically and mentally. Her and I seem to be on the same page quite a bit. She has four pitches that work, and we used every one of them today. She pitched a heck of a game.”

Gates had two hits for the Wolverines (27-9) and scored their lone run.

“Everybody really wanted this,” Vestaburg coach Dan Rons said. “I love this because it really brings the community together. Mostly I am proud of how they didn’t turn on each other when someone made a mistake.

“I got a little rough on them in the fourth inning because I didn’t feel like we were playing good ball. But my team, after I had chewed everybody out, they went around and said don’t worry about it. I liked the way they came together and took care of each other.”

Kalamazoo Christian beat Rogers City 2-0 in the Division 4 Semifinals last year, and the Hurons avenged that loss earlier this spring with an 8-4 win over the Comets in a tournament.

But there’s still a bittersweet taste in Hall’s mouth. 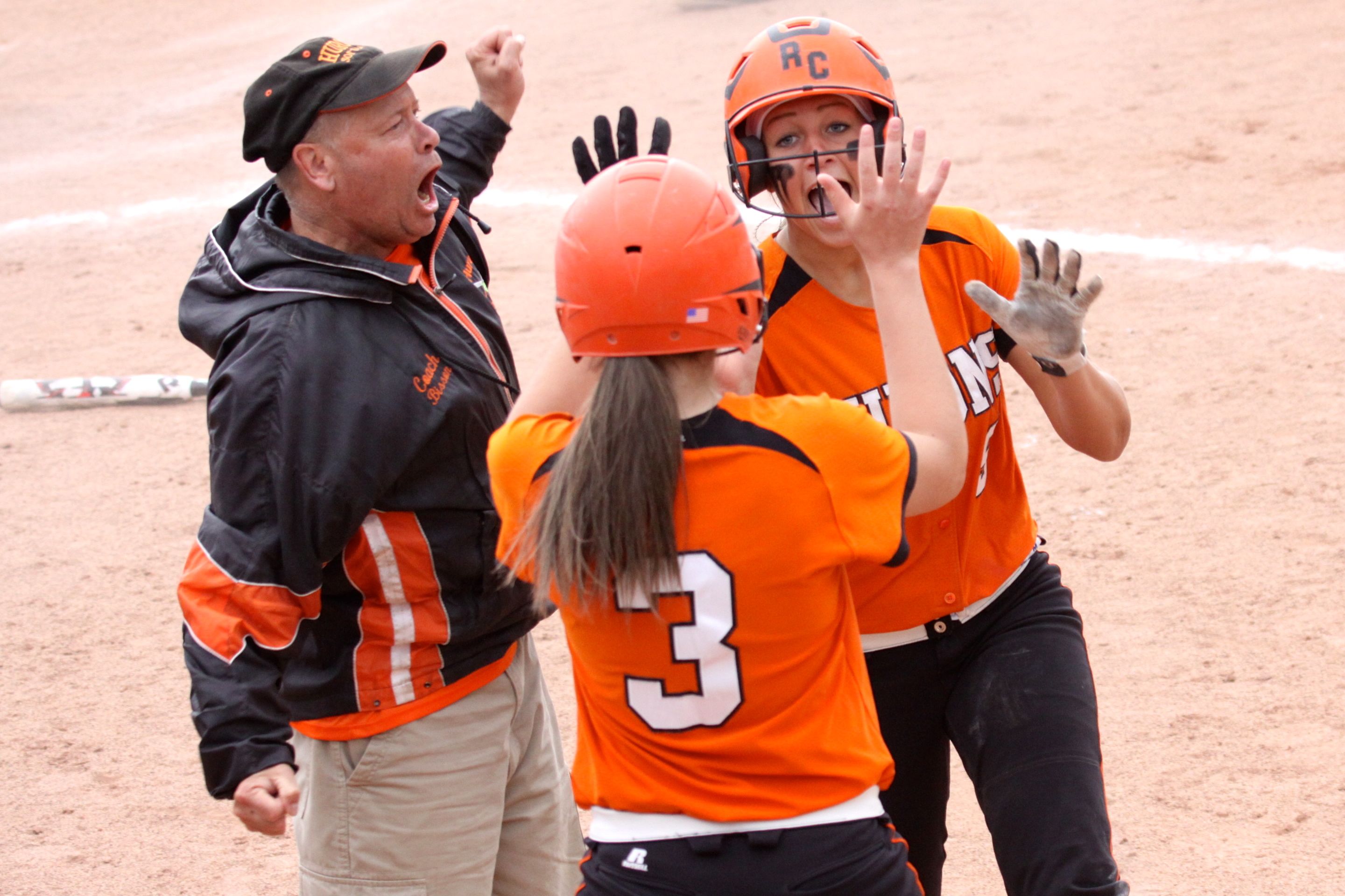 Rogers City (33-6) is one game away from an MHSAA title after beating Fowler 11-1 in five quick innings Friday.

“Everybody kind of wants redemption,” Hall said of Kalamazoo Christian. “It was nice beating them the first time, but this is the spot that we want to beat them, in Finals again. As long as we keep our heads on and make the plays, I think we can do it.”

The Eagles (26-7) and Hurons were tied 1-1 after two and a half innings, but Rogers opened the lead in the bottom of the third and fourth innings scoring five runs in each.

Cassie Brege singled to get things started in the third and Logan Fleming was hit by pitch. Courtney Streich loaded the bases with a bunt, and Sarah Meredith smacked a two-run single to left field to make it 3-1.

Morgan Hall was up next and brought another teammate home with a single. Rachel Chojancki walked to score another, and Brege’s fielder’s choice made it 6-1.

“We actually didn’t know anything about Fowler,” Hall said. “They were the underdogs coming in unranked, we didn’t know any of their stats or anything. Nobody knew what to expect. When we got here our coach did a little bit of digging around, but we just came out and played our game and thankfully did as well as we did.”

The Hurons put up five more runs in the fourth inning and held the Eagles scoreless in the top of the fifth to make it a short day.

Kayla Schafer and Brianna Schmitt each had two hits for Fowler.

“This is surreal right now,” Hall said. “Since freshman year this has always been the dream. We’ve been so close especially these last three years. Last year we just fell short in our first game. The worst that we can be is second place, and that is just surreal. Everyone is thrilled with that.”