DAVISON — The sense of excitement is palpable when Brenden McRill recalls one of the biggest adrenaline rushes he's had on a football field.

He's in his third year as Davison's starting quarterback, but it's the one time he got to play on the other side of the ball that makes McRill really light up.

Although he's put up impressive numbers at the game's most glamorous position, the opportunity to make eight tackles as a safety in a first-round playoff loss to Lapeer last season was about as fun as it gets for McRill.

"Oh, it felt great," he said. "I was so excited for that, because I hadn't played defense since my freshman year. I was ready to go out there and hit somebody."

The willingness to absorb punishment is considered a barometer of toughness for a quarterback, and McRill is certainly willing to do that for the good of the team. Most quarterbacks, however, don't get as hyped as McRill to deliver a blow.

But he isn't wired like most quarterbacks, which is why Davison coach Kyle Zimmerman could confidently add the following hash tag to a Twitter post about McRill: #MyQBIsTougherThanYours.

The groundwork for McRill's unique makeup was forged on the wrestling mats of the Davison youth program and fine-tuned at the high school level under the guidance of Roy Hall, who has coached the Cardinals to six MHSAA team championships and four runner-up finishes since 2000.

McRill was the MHSAA Division 1 champion at 189 pounds as a junior. 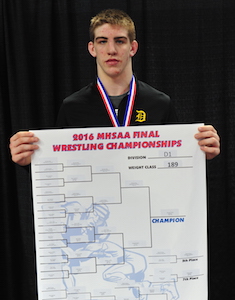 "It definitely makes me different, because I love to hit," McRill said of his wrestling background. "If I'm near the sideline and see a guy, I'm going for the hit; I'm not sliding. That aggressiveness and toughness has definitely helped me."

While McRill is as tough as they come, Zimmerman is reluctant to have his quarterback playing both ways on a regular basis.

"To be honest, he probably should play defense," Zimmerman said. "He's one of our best defenders. At the first day of practice, everybody does drills to simulate stuff. He's lights-out. Anything he does on a football field, he's going to excel at. He's played end for us, he's played linebacker, he's played safety, he's played quarterback.

"We've got other guys we know can play. You know it's a huge drop-off if you put yourself in a position where you could lose someone. If you see the quarterback out there, people are going to be attacking him, trying to tire him. We want him to play at a high level on offense."

And that he does.

McRill received honorable mention on The Associated Press' Division 1-2 all-state team last season as a dual-threat quarterback. As a passer, he was 68-for-136 for 1,306 yards, 13 touchdowns and seven interceptions. He also ran 161 times for 642 yards and 11 touchdowns.

In the 2016 opener against Saginaw Arthur Hill, McRill was 3-for-5 for 52 yards and two touchdowns passing to go with five carries for 27 yards and a touchdown in the first half of a 62-12 rout of the Lumberjacks.

The mission for McRill and his teammates is to get Davison back on the state high school football map. The Cardinals made the MHSAA playoffs seven straight years from 2002-08, reaching the Semifinals three times and going 65-19 during that span. In the seven years that followed, Davison went 33-33 and made the playoffs three times.

"We had three starting sophomores that first game my sophomore year," McRill said. "There was me, offensive tackle Zach Slezak, who at the time played defense, and Corran Thornton, who started at defensive end. We started it together. Our senior year, we want to make it our best and have one of the best years Davison's ever had."

On the wrestling mat, McRill knows what it's like to compete at a high level.

McRill added his name to the list of individual MHSAA champions coached by Hall when he won the Division 1 title at 189 pounds with an overtime decision over previously unbeaten Nicholas May of Kalamazoo Loy Norrix. McRill was fifth at 152 as a freshman and third at 160 as a sophomore.

"Going into high school, I planned to win it right away my freshman year," said McRill, whose only blemishes on a 38-2 junior record were against MHSAA champions. "Just with that legacy and Coach Hall's style, you're expected to win. You're working as hard as you can. ... It felt real good to get that out of the way."

He helped Davison reach the MHSAA Division 1 Team Finals in 2014 and 2016, with a semifinal appearance in between in 2015. Each of the last four years, however, Davison has lost to the eventual champion.

"It's kind of upsetting, but it will make us hold each other more accountable that we need to finish this year," McRill said. "We need to win. We've got a lot of guys back and some incoming freshmen who are ranked guys and very good. So I'm very excited for this team coming up." 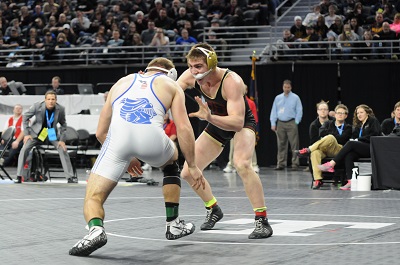 McRill does what he can to maintain his sharpness as a wrestler, but he devotes most of his attention to football over the summer.

"I try to get a couple of drills in right now when the season's going," he said. "When we get to the playoffs, I try to stay off it, focus on football and stay healthy for that. Right after football, I try to get a couple days off and get ready for wrestling. I try to train hard, because I know I have a lot of catching up to do."

McRill doesn't compete in the national wrestling tournaments that many of his competitors do over the summer, but that hasn't hurt his exposure to college scouts. He is weighing offers from Central Michigan, University of Michigan and West Virginia.

Once football and wrestling seasons conclude, McRill said he may return for one final season on the baseball diamond. He grew up playing baseball, but cut back on it once he realized his college future was likely to be in football or wrestling.

He didn't play baseball as a freshman, because he was working to win the starting quarterback job the following fall. McRill was called up to the varsity baseball team as a sophomore after throwing a no-hitter on the junior varsity team.

"I think I'm going to come out my senior year," he said. "We've got a great group of guys in baseball, too. That's one that people kind of sleep on, but we could come up with something in baseball."

In the meantime, the arm that threw a no-hitter for the JV baseball team will be firing touchdown passes for a football team that could have a special season.

"The first day I saw Brenden, I knew who my quarterback was from how he competed and how he threw," said Zimmerman, whose first year at Davison was McRill's sophomore season.

"We were probably going to take our lumps early, but it's going to pay off in the long run. He was steady his sophomore year, he was good last year and he's going to explode this year."

PHOTOS: (Top) Davison quarterback Brenden McRill lines up over center during his team's game last season against Saginaw. (Middle) McRill holds up his weight's bracket sheet after winning the Division 1 title at 189 pounds last winter. (Below) McRill looks to lock up during his championship match. (Click to see more from HighSchoolSportsScene.com.)