There is no offseason for a championship wrestler.

And if he’s on the verge of making MHSAA history, he may get only a week off before getting back to work.

Hudson's Jordan Hamdan and Detroit Catholic Central's Kevon Davenport are ready to hit the mat again and train for next year in an attempt to become the state's 25th and 26th four-time individual champions.

Both won their third straight Individual Finals titles last weekend at Ford Field, as Hamdan took the 130-pound weight class in Division 4 with a 10-0 major decision victory over Robert Rogers of Burton Bendle and Davenport won the 145-pound Division 1 title with a 7-1 decision over Vic Schoenherr of Bay City Western.

"This Sunday and Monday I will get in some practice time and then go from there," said Hamdan, who finished this season with a 52-0 record. "It never ends. If you stop training then someone can catch up, so you have to keep improving."

Davenport is ready as well.

"(Being a four-time champ) is always in the back of everyone's mind when you get here," Davenport said. "I got my three in; now the next step is number four."

Davenport said he is open to advice from the 24 wrestlers who have already forged the path of four straight titles. 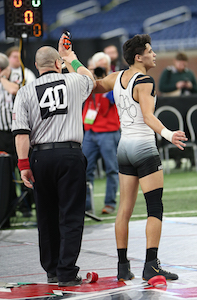 "Wisdom is everything; experience is everything," Davenport said. "Even if there is a little bit that they can teach me, I will take whatever I can get."

If Hamdan and Davenport can become Nos. 25 and 26, they will be the first four-time champions from their highly successful programs.

"There is a lot that can go wrong trying to win four," Hudson coach Scott Marry said. "Injuries, sickness, being in the right weight class and keeping your weight under control. I think Jordan will be a good recipient of it because of what he does. He believes in the process and all the training that goes into avoiding those pitfalls."

Commitment is what all great wrestlers can agree is the key to making it to the top of the podium.

"I will put in the work," Hamdan said. "If I do what is necessary, I will still be comfortable no matter what the pressure becomes to be a four-timer. I will be focused on the goal. It all boils down to putting in the work."

Hopefully that will be enough.

"There is an element of luck involved to win four," Scott Marry said. "But you make your own luck. Keep you weight in control, study your opponents and train and that will help you seize that opportunity.”