PLYMOUTH — There was a championship to be won. That was the focus. That's how Ryan Fischer would have wanted it.

So, it's understandable that following player introductions before the MHSAA Division 1 Hockey Final on Saturday night at Compuware Arena, many on the Grandville team didn't notice the tribute that came their way from the Detroit Catholic Central student section.

Chants of "Ryan Fischer ... Ryan Fischer" came from the young men in the Shamrocks' student section, a reference to the Grandville captain who died in his sleep the morning of the teams' Semifinal game on March 7, 2014.

"Honestly, (pregame) was a blur to me, but it also doesn't surprise me," Grandville coach Joel Breazeale said. "It's an amazing community of young people."

The teams put emotional bonds aside when the puck dropped, as Catholic Central jumped out to a 3-0 lead, had its advantage cut to one goal in the second period, then pulled away to repeat as Division 1 champion with a 5-2 victory.

The two teams formed a bond following the death of Fischer. Catholic Central traveled to Grand Rapids on Feb. 7 to play Grandville before 3,000 fans at Van Andel Arena in a game that didn't have the feel of the high-stakes rematch for the Division 1 championship.

"It was a really unusual game there," Catholic Central coach Danny Veri said. "It felt like you were playing a pickup game against a bunch of your family members. The intensity wasn't there. There was only one penalty. Everyone went through the motions. The event was really the focus and the game was almost secondary."

That wasn't the case Saturday night. The victory gave Catholic Central its 11th MHSAA title in the last 19 years and 12th overall, which ranks third behind Bloomfield Hills Cranbrook Kingswood's 17 and Trenton's 14.

"It was really ironic that they were there," Veri said of the Bulldogs. "You almost feel bad winning against them. The team is nice people, the parents are all nice people. When we went there, they opened up their arms to us like we were family. We made it clear in the locker room we have a game to win and let's move forward." 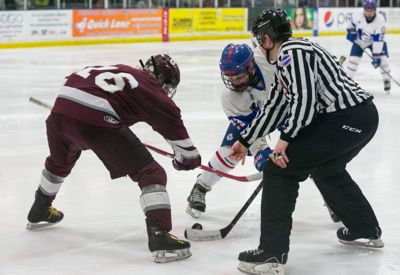 Breazeale appreciates the support shown to the Grandville community by those at Catholic Central, but also respects the commitment to put that aside temporarily to play a physical sport the way it should be played.

"I don't know if you could ever ask for a better example of competitive sportsmanship that goes right to the level of passion, but somehow manages to keep the respect of the game in there," Breazeale said. "It's a remarkable example between both sports communities and certainly the young men who compete. It's very impressive, especially given what's at stake."

Honoring Fischer's memory was a catalyst for Grandville as it reached an MHSAA Final for the first time after making the Semifinals on two other occasions.

Catholic Central (24-5-1) jumped out to a 3-0 lead on first-period goals by JoJo Mancinelli and Andrew Spiegel and a rebound goal by Luc Krasicky at 6:30 of the second.

Grandville goalie Myles Madden stopped two breakaways in the first six minutes of the second period before Krasicky jammed one by him.

The Bulldogs (25-4-2), who were generating some good scoring chances early in the period, got back in the game in a hurry with two goals 14 seconds apart late in the second.

Jacob Baum caught a high rebound, put the puck down and scored with 3:10 left in the second period to put Grandville on the board. As that goal was being announced, Gianni Vitali cut the deficit to 3-2 when he banged in a rebound with 2:56 to go in the period.

The Bulldogs' momentum was short-lived, as Evan Rochowiak blasted a shot from the blue line past Madden on the power play with 1:50 remaining in the period.

"First of all, it was a great play on the power play by Blake (Veri)," Rochowiak said. "When they put two goals in and were one goal behind us, we were getting a little bit nervous. The goal took a little pressure off of us and let us start playing the way we did in the first period."

Rochowiak put the game away by burying a shot under the crossbar with 3:10 left in the third period.

"It's been unbelievably stressful," senior defenseman Andrew Lane said of Catholic Central's bid to repeat. "There's a lot of pressure from the school, parents, family, friends. Everyone's relying on you, especially this year. Last year, we had (injured teammate Matt) Sorisho to play for. This year we were kind of on our own without anyone to help us. Luckily, we had a team that all bought in to one program. It was unbelievable winning again. It was probably the best feeling in the world."

Grandville had only six more shots on goal after cutting Catholic Central's lead to 3-2 late in the second period.

Madden finished with 42 saves for Grandville, while Spencer Wright had 22 for Catholic Central.