KALAMAZOO – They are called the Shamrocks, but for this wrestling season a more appropriate nickname would be Vikings.

The Detroit Catholic Central wrestling team not only won the Division 1 team championship this season, it dominated everything that got in its way in the state of Michigan.

Catholic Central’s final hurdle came in the Division 1 team championship match, a 57 to -1 win over Brighton, which had one point deducted early in the match for unsportsmanlike conduct.

The victory against Brighton capped a three-match blitz through Finals weekend by a combined score of 173-5 over the two-day event.

If that sounds like something out of Viking lore, that is exactly what the Shamrocks planned.

“Well, our team motto in the tourney is `burn it down, burn the boats,’” said Catholic Central junior Joe Urso. “Like they say on the TV show ‘The Vikings,’ ‘burn their boats.’ We came into this tournament looking to burn it down.”

That was exactly what a group of Shamrocks were chanting after the final match of the dual clinched a second consecutive title, the sixth Division 1 team title in the past nine years for Catholic Central.

“It’s a great feeling,” said Catholic Central junior Kevon Davenport. “We came out and from one through 14 everyone did a great job. We have great team unity, and that is one of our strong points. We have fun, and we like each other like brothers.”

Davenport was one of three Catholic Central wrestlers who recorded pins in the Final. Joshua Edmond (135 pounds) and Aidan Wagh (171) joined Davenport (145) with falls.

“This is unbelievable,” said Kamali, “I’ve never seen anything like this.”

Kamali points to the team’s work ethic as a key to producing those impressive results. 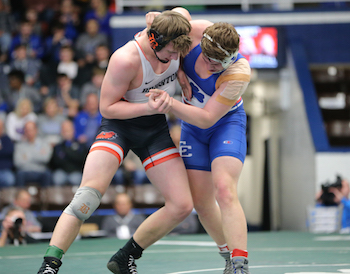 “We are the hardest-working team in the state,” Kamali said. “Nobody in the state works as hard as we do. We also have the best coaches in the country.”

Catholic Central coach Mitch Hancock has led the Shamrocks (29-1) to their six titles since 2010. Along with hard work, Hancock believes in testing his team against the best competition he can find.

“I believe iron sharpens iron,” Hancock said. “The common equation of all this year’s champions (Lowell, Dundee and Hudson as well) is the teams all put together such difficult schedules. We wrestled Lowell a few weeks ago, and we also wrestled Dundee and Hudson.”

Catholic Central received major decisions from Easton Turner (215) and Steven Kolcheff (285), who started the dual with four-point victories to put the Shamrocks up 8-0.

“This was pretty special,” Moscovic said. “Last year was a big moment because we lost in the Quarterfinals my sophomore year. We just came in with a mission this year. This team is like one big family. Each of our teammates is like a brother. Our team is more of a brotherhood.”

Click for full results of the weekend’s Division 1 matches.