PLYMOUTH — Brendan Hill was hooked on high school hockey long before he played his first shift at Detroit Catholic Central.

“When I was like 8 years old, I would come to these games and watch and see how rowdy the student section is,” said Hill, a senior defenseman. “I had a dream to play at C.C. It just happened. There’s no words for it.”

The dream came with a dream ending for Hill and the Shamrocks’ 12 seniors, as their final act in a Catholic Central uniform was celebrating an MHSAA Division 1 championship after a 3-1 victory over Saginaw Heritage on Saturday at USA Hockey Arena.

The game was played before an enthusiastic crowd of about 3,000 fans, including two large and vocal student sections.

“You have all your closest buddies up there going bananas,” senior forward Carter Korpi said. “It’s awesome. It makes it that much better.”

The atmosphere in which the game was played is the biggest selling point for coaches like Catholic Central’s Brandon Kaleniecki when they try to persuade students in their own hallways to choose the high school game over the travel ranks.

Another selling point is the caliber of play in Michigan. There was a time when Catholic Central would steamroll through the MHSAA Tournament, facing little opposition. Those days are gone.

The Shamrocks, heavy favorites to win it all this winter, had to survive a 1-0 Quarterfinal with Salem and a 4-2 Semifinal with Rochester United and needed an empty-net goal in the final minute before they could exhale against Heritage.

“If you watched all the games today, the environment speaks for itself and why more and more kids are going to want to play high school hockey. Guys from this team are going on to play juniors. That option is there. People are starting to realize that; hopefully more do, because you get to experience something like this. As a coach, I love it. I’m so excited to be a part of it.”

This senior class was at risk of being one of the few at Catholic Central to not win an MHSAA championship during its time in the program.

It was the 14th MHSAA title for the Shamrocks, tying them with Trenton for second most all-time. Bloomfield Hills Cranbrook Kingswood leads the way with 17 titles. Only three times in the last 22 seasons has Catholic Central gone more than one year without a championship.

The Shamrocks fell short against Brighton each of the last two seasons, losing 5-2 in the 2017 championship game and 2-1 in the 2018 Semifinals. 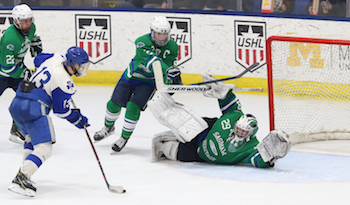 “When you have that good of players on the ice and off the ice, when they’d lose it’s tragic,” Catholic Central senior forward Mitch Morris said. “I’m really happy we all got to celebrate. It’s bittersweet. You feel bad for (the last two senior classes). You wish you could have done more. I hope all the underclassmen realize that’s why you play.”

Catholic Central took a 1-0 lead when senior forward Rylan Clemons skated in from the left circle and put a shot from close quarters under the crossbar over the right shoulder of Heritage goalie Jack Jesko at 9:22 of the first period.

Jesko kept it a one-goal game when he made perhaps the save of the year in high school hockey. Down on his side during a scramble around the net, Jesko made a glove save on a shot by Zach Borchardt, who appeared to have almost the entire net available with 7:29 left in the second period.

“I was just trying to throw my glove out and give myself a chance,” said Jesko, whose 44 saves on 46 shots ranked fifth for an MHSAA Final. “Happy to hit it. I just kept my focus and acted like it was just a normal save; don’t get too high and don’t get too low.”

The Shamrocks finally got some breathing room when Ryan Marra deflected a shot from the point by Luke Collins past Jesko with 10:41 left in the game.

The Hawks pulled Jesko for an extra attacker with 2:12 remaining and quickly cashed in, cutting the deficit to 2-1 on a goal by Edison Symons with 1:56 to go.

Marra scored into an empty net with 54.4 seconds left to seal the Shamrocks’ victory.

For Heritage, it was the second straight loss in the MHSAA championship game against an established power. The Hawks lost to Brighton, 5-2, in last year’s title game. Before last year, the only team from Saginaw to reach a championship game was Saginaw Nouvel, which lost in the 1990 Class B Final.

“We’re really trying to make strides in getting our team noticed throughout the state, and not just in our area,” Heritage coach J.J. Bamberger said. “This is our fifth final four appearance and second state championship game, coming up short both times. For a school like ours in our area, that’s nothing to be ashamed of.”