They were certainly good enough to go back to AAA travel programs, but they never bought into the notion that going that route is the only way to move on in the sport.

The reward for their loyalty to Hartland came Saturday when the senior centers led the Eagles to their first MHSAA championship after the program had come close each of the past six seasons.

Behnke finished with five goals in Hartland’s two games this weekend at USA Hockey Arena, while Albring had a goal and four assists over the Semifinal and Final.

Albring was the first Hartland player to break free from the pile of players in the championship celebration. He headed for the team bench to exchange hugs with the coaching staff.

“I came here my sophomore year,” Albring said. “I had zero confidence in my game and where I was at. All the coaches on the bench I went and hugged today, they’re the only reason we’re here today and they’re the reason I’ll probably play hockey next year. They changed my love for the game, made it so much more fun, so much more enjoyable and easier to learn, too. Everything goes to them. They’re by far the best coaches I’ve ever had.”

It’s hard to believe a player like Albring lacked confidence, considering he made all-state as a sophomore and junior and likely will make it this season after scoring 10 goals and tallying 42 assists.

“He was the same size as a sophomore,” Hartland coach Rick Gadwa said. “He’s a big boy that’s got some puck skills and can play the hard part of the game. Josh didn’t get worse because he scored less goals this year. That guy decided that, as a player, if I’m going to play at the next level, I’m going to have to change my role. He leads our team in blocked shots; he probably leads the state in blocked shots. He doesn’t lose board battles. He’s going to be a guy who somebody is going to be lucky to have next year.”

Behnke, a second-team all-state pick last season, emerged as one of the top players in Michigan this winter. He finished with 35 goals and 21 assists. 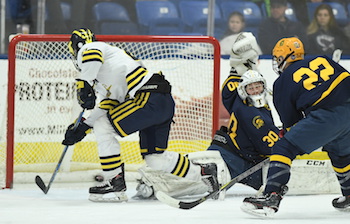 “Jacob Behnke has proved, as well as some other guys, you can play high school hockey and still develop,” Gadwa said. “Jacob Behnke will play junior hockey. He, in my opinion, was the best player in the tournament thus far and will probably finish that way. He’s dominant. To watch where he was his sophomore year, he was always good, to watching him become elite is really a special thing to see. He worked his butt off every offseason and he got better every day from the first day he stepped on the ice.”

Trenton reached its 21st MHSAA championship game by defeating three teams ranked among the top six over five playoff games. The third-ranked Eagles proved to be too much, jumping out to a 4-0 lead after two periods and holding off a late charge by No. 5 Trenton.

“I don’t think anyone gave us much of a shot at the beginning of the year,” Trenton coach Chad Clements said. “To get here, I know all the guys wanted to win, but I was proud of their efforts. They proved a lot of people wrong this year. A couple bad mistakes by us early on, but they never quit battling. I wish it would’ve ended differently.”

Behnke scored the only goal of the first period with 6:58 left when he took a pass from Joey Larson and put a shot up high while falling to the ice.

The biggest period in Hartland hockey history was the second. The Eagles took control of the game by scoring three times in a 7:17 span.

Nolan Szczepaniak and Brandon Clark had power-play goals to get Trenton within two with 2:05 left in the third period, but the Trojans couldn’t get another puck past Hartland goalie Brett Tome. Tome finished with 27 saves.

“It was hard to battle back,” Clements said. “It just kept getting harder and harder, but they stuck with it. The third period we came out and their goalie played exceptionally well. We just couldn’t get enough past him.”

Trenton allowed only three goals over five playoff games before the Final. Hartland outscored six playoff rivals by a combined 48-4.

PHOTOS: (Top) Hartland players celebrate their first MHSAA championship Saturday at USA Hockey Arena. (Middle) The Eagles push a goal past Trenton into the back of the net.