GRAND RAPIDS – Moments before its final round Friday, Southgate Anderson launched into an “I believe that we will win” chant with its crew of fans at the Grand Rapids Delta Plex.

A year ago, the Titans came to the MHSAA Division 1 Final with similar confidence – and finished seventh of eight teams at the championship meet.

But this time, with lessons learned, Southgate Anderson backed it up. The Titans scored the meet’s top Round 2 and 3 scores and outlasted surging Hudsonville to win their first MHSAA cheer championship.

“Last year … it was a crushing blow. We couldn’t believe that happened, and we weren’t going to let it happen again,” Titans senior Bri Walsh said. “We worked too hard to let it go. We needed to push through.

“It was a mindset. I’ve never been on a team this dedicated.”

Southgate Anderson scored 816.6032 points Friday, besting its previous top score this season by less than a tenth of a point. Hudsonville, which like Anderson had never finished even among the top two at the Finals, came in second with 813.2976. Rochester Stoney Creek was third with a score of 811.3456.

The Titans’ pre-Round 3 chant carried additional significance because of strong performances the last two weeks. As the regular season came to a close, Southgate Anderson considered itself a strong Round 2 team. For a while before that, the Titans specialized in Round 1.

But just before Districts, Southgate Anderson made some switches in its final routine that paid off big. Also, coach Colette Norscia said the difference between this and past teams was the increased time it spent conditioning. And Walsh agreed that was a difference-maker in the Titans’ being able to land more difficult skills this winter.

Although 16 of Southgate Anderson’s 28 cheerleaders were on the team last year, most of Friday’s competitors watched from the sideline in 2011.

“They were hungry for it last year,” Norscia said. They had an opportunity to see on the sideline what needed to be done, and they took that into the gym this year.”

She admitted that unlike usual, she didn’t look at the scoreboard heading into her team’s Round 3, and had no idea where her team stood. Hudsonville performed its Round 3 later in the final rotation, and Eagles coach Amanda Cooper did look at the scores and knew her team needed to be just about perfect to move into first place.

Hudsonville was nearly flawless and finished nine tenths behind the Titans in that round with a score of 324.600. But the Eagles’ final score was its best this season by nearly three points, and the runner-up finish bested their best previous Finals placing of third in 2010. Hudsonville finished eighth last season.

“We had our best three rounds on the same day here at states, and I can’t ask for anything more,” Cooper said. “We had an amazing week of practice and an amazing warm-up, so I was just excited for them to go out there and nail (Round 3). That’s what we said – just have a clean, fun, solid round.

“Runner-up is awesome. We couldn’t be any happier.”

Click for full results from the Division 1 Final, and check back Saturday night for results from Divisions 2, 3 and 4. 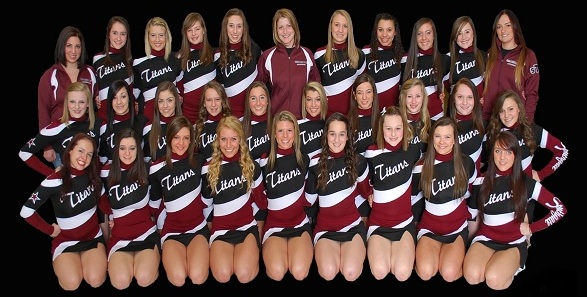