He was one out away from getting his second against Ida.

The Blue Devils led 3-0 going into the seventh inning of the Division 2 championship game at Michigan State’s Secchia Stadium.

But three runs in the seventh stunned the defending Division 2 champs, and Ida used a four-run ninth inning to take away the title with an 8-4 win.

“That was pretty fantastic to be a part of it,’’ said Bluestreaks coach Dawn Forter, who finished her 14th season. “It has been fantastic to be a part of this since March 12. We had a feeling this group could do this for a long time. They worked together better than any group I’ve seen before. I told them to keep fighting. We’ve been down a lot during the season, and they don’t quit.’’

Ida’s Karlee Lambert led off the ninth inning with a single. She was sacrificed to second and Brooklyn Woelmer, who tied the game with a double in the seventh, singled and Sydney Janssen walked to load the bases.

But only a late surge gave Ida (37-7) that extra-inning opportunity to win its first title since 1994.

To start the seventh Whitney Wegener scored on a fielder’s choice play to make it 3-1. With two out and a runner on, Woelmer hit a sinking line drive that got under the glove of the rightfielder and bounded to the wall. Racing around the bases, Woelmer was given a run-scoring double and scored on the two-base error to knot the score at 3-3.

“My coach said just get another hit,’’ said Woelmer. “I couldn’t say I was going to hit it out. Just trying to come through. Thank God. We just kept saying we’re not done yet. Our coach kept saying, why not us? And we agreed. I started bawling after we tied it up. There was hope.’’

In the top of the eighth, Taylor Wegener led off with a single, moved around the bases on a sacrifice and fly out and then scored on a wild pitch. But in the bottom of the eighth, shortstop Carley Barjaktarovich, who took a shot to the face off a bad hop earlier in the game, tripled with one out and beat a throw home to score on a short sacrifice fly and make it 4-4. 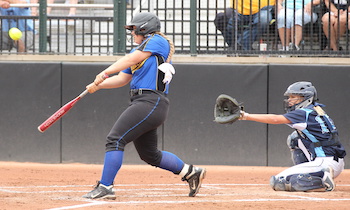 Richmond pitcher Erin Shuboy threw a no-hitter as a freshman in last year’s Division 2 championship game, and this year scattered just six hits going into the seventh inning before the Bluestreaks rallied.

“That’s a shame. We had that thing in the bag,’’ said Stuart. “We make a routine play and we keep the lead. Our defense has been great all year. All we have to do is stop the ball and we still have the lead. They had everything in the world going for them after that. They came in hot. You have to worry about hot teams.’’

Richmond put together the first threat of the game in the second inning when Raechel McKiernan singled and Cameron Barrett walked with two out. Ida pitcher Lauren Kreps got out of the jam when she struck out Kennedy Caperton looking.

The Blue Devils were at it again in the third when Barjaktarovich singled and Shuboy walked. Caperton came through with a run scoring single to make it 1-0 as the runners advanced on the throw. Evelyn Swantek followed with a single to make it 2-0, which was all the cushion Shuboy would usually need.

Richmond received a scare when Barjaktarovich took a shot to the face off a bad hop in the top of the fourth inning, but she stayed in the game. Ida put two runners on in the top of fifth, but Shuboy struck out Karlee Lambert and got Hannah Tuller to bounce out to shortstop.

Ida also put two on in the sixth with two out, but Ashley Teltow speared a line drive off the bat of Ashlyn Brososky to keep the Bluestreaks off the board. Richmond scored a run in the bottom of the sixth on an RBI single by Thueme.