BATTLE CREEK — Mickey Moody knew what he was doing when he angered Dundee pitcher Vanessa Ewing.

As the Vikings’ softball coach, Moody knows which buttons to push to motivate his senior. When he took her out of the MHSAA Division 3 Semifinal on Friday, he expected Ewing to respond with a vengeance in the championship game.

Unionville-Sebewaing isn’t as familiar with Ewing’s personality, so the Patriots had no idea that walking the batter in front of Ewing in the top of the ninth inning would ignite such a fire under her.

After a semi-intentional walk to No. 3 hitter Haleigh Kimble on four straight pitches, Ewing came to the plate with runners on first and second base — and an attitude.

“I was just thinking about how they walked Haleigh and how mad that makes me,” Ewing said. “That’s really disrespectful. If they’re scared of Haleigh and don’t think I can hit, I have to prove them wrong.”

How’s this for proof? Ewing hit a three-run homer over the left-field fence to account for all of the scoring in Dundee’s 3-0 shutout of Unionville-Sebewaing in the MHSAA Division 3 championship game Saturday at Bailey Park. 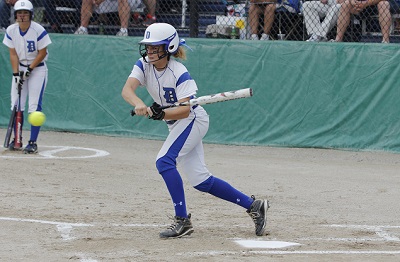 Hannah Rachor began the winning rally by doubling with two outs. Patriots pitcher Erica Treiber, who allowed only four hits before that double, threw four outside pitches to Kimble to put runners on first and second. Ewing then cranked an 0-2 pitch over the fence in left to break the scoreless deadlock.

“I swung as hard as I could,” Ewing said. “I just hit an inside pitch. Those definitely fly far.”

Ewing made her blast hold up for the victory by completing her shutout in the ninth inning, striking out Jennifer Winchell to end the game.

The championship is Dundee's first; the team had never advanced past Regionals until this week.

Ewing pitched a four-hitter, struck out 15 and walked four just one day after being pulled in the fourth inning of an 11-6 victory over Allen Park Cabrini.

“Vanessa doesn’t like being taken out,” Moody said. “Call it a head game, whatever you want to call it. Anything to motivate her and make her mad, it’s good enough for me.”

Ewing pitched the gem, despite experiencing arm pain in the past few games.

“I’ve been struggling lately,” she said. “My arm’s been killing me. This was the last game. I didn’t care if my arm falls off.”

The Patriots (37-4) had a chance to win it in the bottom of the seventh when Treiber led off with a double and moved to third with one out on a bunt by Katie Gremel. Treiber stayed at third on a groundout to third and was stranded when Allison Hoppe flew out to center field.

Both teams went down 1-2-3 in the eighth inning before Dundee (45-1) won its first MHSAA softball title in the ninth.