AUBURN HILLS – Day One of the MHSAA Individual Wrestling Finals always is exciting for the wrestlers who qualified.

It was twice as exciting for Iron Mountain senior 130-pounder Alex Edwards.

Not only was he competing in his third Finals, but he also picked up win 150 in his career with a 24-7 technical fall win over Vandercook Lake's Chaun Fluker in their first-round match in Division 4 on Thursday at The Palace of Auburn Hills. 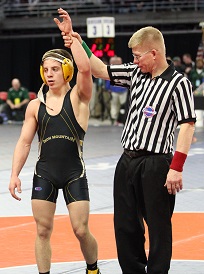 But most exciting for Edwards was that his older brother, Charles Edwards, flew in from Florida, three weeks shy of deploying to Afghanistan, to watch Edwards get to work.

Charles Edwards is a senior airman in the Air Force.

"I didn't have a clue he was coming, he told me he was going to watch it online," Alex Edwards said. "I figured I'd call him after my match. I'm very excited."

So was older brother, who has been busy training for his deployment and hasn't been able to watch his younger brother all year.

"I flew here just to watch him," said Charles, who was a two-time Finals qualifier when he wrestled for Iron Mountain. "It was exciting to see him."

Edwards, who took eighth place at 130 last year, will try and send his brother overseas really excited if he can win an MHSAA title. Wrestling continues through Saturday at The Palace.