Relative to the other 15 softball teams playing in the MHSAA Semifinals two weekends ago at Michigan State University’s Secchia Stadium, the Escanaba contingent was far from home.

Escanaba not only advanced to play in its first MHSAA championship game since 2003, but returned home to the Upper Peninsula with its first MHSAA Finals title in the sport – and first in any sport with a unified tournament (both peninsulas together) since the football team won Class A in 1981.

The Eskymos gave up two runs total over six postseason games, shutting out Eaton Rapids 2-0 in a Semifinal and South Haven 5-0 in the Division 2 championship game to earn the honor as the final MHSAA/Applebee’s “Team of the Month” for 2017-18.

“It had been so long since we’d had a group down here, I think it was kinda nerve-wracking for them to be down on that field,” said Escanaba coach Jamie Segorski of the 2016 team, the first to return to the Semifinals since that 2003 Division 1 runner-up. “The last couple of years we’ve been fortunate enough to get down there, develop a comfort level, and we’ve come up with a nice schedule that’s convenient and comfortable and helped the girls stay with their norm.

“We expect to make it down there. Will we make it every year? Absolutely not. The competition is fierce. But in their minds, they know they can do it.”

Escanaba finished the spring 31-3, its only losses to eventual Division 3 runner-up Millington, Division 3 semifinalist Clinton and Rice Lake of Wisconsin. All three defeats were by just a run.

The Eskymos, as noted, also had advanced to the 2016 and 2017 Division 2 Semifinals, and they entered this playoffs ranked No. 3 by the state coaches association. So opening with District wins of 4-0 over Cheboygan and 11-1 over Petoskey wasn’t shocking. But a 10-0 shutout of No. 8 Muskegon Oakridge followed by a 12-0 shutout of Remus Chippewa Hills in the Regional certainly grabbed some attention.

Escanaba followed those with a 9-1 Quarterfinal win over annual power Saginaw Swan Valley, before finishing the run with two more shutouts – and a combined postseason scoring edge of 53-2.

Sophomore Gabi Salo without question is one of the best pitchers in the state. She came in in relief during the 2017 Semifinal loss to Richmond, but returned to Secchia to throw 14 shutout innings, giving up a combined seven hits and one walk with 20 strikeouts. She has added four mph to her fastball over the last year, dialing up 66 during the final inning against South Haven. For the season she finished 21-3 with a 0.40 ERA and 287 strikeouts in 156 innings pitched – and she’s already set to play at University of Wisconsin after graduation. 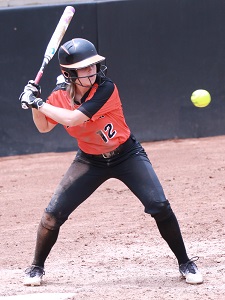 Her nearly unhittable performance was matched by plenty of hitting from her teammates. Junior rightfielder Lexi Chaillier hit .510 with eight home runs and 27 stolen bases from the leadoff spot. Senior second baseman Claire McInerney (.439, 16 SB), senior shortstop Taylor Gauthier (.400, 37 RBI) and senior third baseman Madison Griffin (.430, 6 HR, 46 RBI) filled in the next three places in the lineup, respectively. Eight starters entered the final week of the season batting at least .371, and all nine starters this season had at least one home run. Freshman Nicole Kamin batted fifth both games of Finals weekend and finished the season hitting .526 over 13 games, while going 10-0 with a 1.26 ERA from the pitching circle.

Gauthier and McInerney were three-year starters in the middle of the infield, and the rest of the team’s seniors all came up for the 2016 tournament run and had made all the trips to MSU. The team is well-traveled during the regular season as well, frequently heading downstate and into Wisconsin to find tough competition. The Eskymos find plenty at home too, as Delta County also includes Gladstone and Rapid River – ranked No. 8 in Division 3 and No. 9 in Division 4, respectively, heading into the postseason.

Football is king in Escanaba, and basketball rules the girls sports scene across the Upper Peninsula. But Eskymos softball came home as first-time-in-a-long-time champion, toppling history, clichés about the weather and any remaining misconceptions that teams traveling over the Bridge will sooner or later run into a rocky road.

“It’s fun to watch the girls develop that grit – being from the U.P., they always feel like they’re not looked at like everybody else, like they’re not as good, like how can they be good when they have snow until July,” Segorski said. “I think it really helps determine that higher sense of determination to win games.

“They’ll bask in the glory. They’ll enjoy it. And the younger girls were able to see what happened, see the fun and what we got done, and they’ll come in next year very determined.”

PHOTOS: (Top) Escanaba gets ready for its turn at bat after holding South Haven to another scoreless inning during the Division 2 Final. (Middle) Lexi Chaillier lines up a pitch during the championship game.