PLYMOUTH – Goaltender John Lethemon was right on all week for the Farmington hockey team.

In net, he was nearly unbeatable. And after the Falcons finished an unpredictable run Saturday with a 2-1 win over Sault Ste. Marie and their first MHSAA title, he said what everyone else was thinking.

“I don’t really think anybody in Michigan besides these 19 guys, our four coaches, the trainers and obviously our parents believed we could do this,” Lethemon said. “We knew all along that if we caught fire at the right time, some bounces would go our way … and we all just busted our butts the whole six games."

It was tough a week ago to see the Division 3 tournament unfolding the way it did over the last five days, with reigning champion Bloomfield Hills Cranbrook-Kingswood considered the best by many in any division and a likely champ if the Cranes somehow were to stumble.

That was before Lethemon made 60 saves in a 3-2 win over Cranbrook-Kingswood in the Quarterfinal, 21 more in a 2-1 win over Grand Rapids Catholic Central on Friday and a final 29 as the Falcons dispatched of the Blue Devils – and then accepted his championship medal to student section chants of “M.V.P.”

But the Falcons felt the impact of a number of contributors this week.

In front of Lethemon were a strong group of defensemen including seniors Austin Meltzer, Grant Newton and Roman Firestone, who all likely played close to 40 minutes during the Final. Keying the offense was sophomore Jason Petras, who scored once in the Semifinal and both goals in the championship game.

And keying Petras, in part, was his guardian angel.

Jason’s mom Kim Petras, also a teacher in the Farmington district, died Feb. 4 after a fight against colon cancer. He played for the Falcons that night, and with his teammates has since rallied to her memory.

Farmington coach Bill Newton – himself currently battling the same form of cancer – called Petras “a warrior and the catalyst of this hockey team from that point.”

“My mom was watching down, definitely helping me,” Petras said. “I knew she was with me through thick and thin. She’s my number one fan, and I knew she had a lot to do with how I played the last couple of games; that’s for sure.”

Farmington had scored first in all of its first five postseason games, and Petras giving the Falcons the lead again just 38 seconds in provided another jolt of confidence to go along with their teammate defending between the pipes.

Petras added his second goal at 13:17 of the first period. 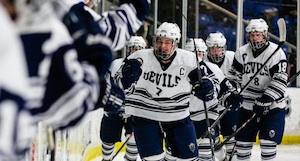 Blue Devils senior Blake Mastaw got his team on the board 18 seconds into the second period. But Lethemon and his crew of blueliners took care of the next 36 minutes and change.

“We thought if we could play with a first-goal lead, that might take them out of their comfort zone and leave their goaltender hanging out on odd-man rushes,” Sault Ste. Marie coach John Ferroni said. “But they got the first goal, and we had to play a different style.

“They always thought, hey, we could steal this game. A 2-1 game is just one good shot on goal and you’re back tied again.”

Sault Ste. Marie finished 25-3-2 and runner-up for the seventh time as it pursued its first MHSAA hockey title since 1989.

Farmington ended 21-10, giving Newton a championship in his first season as head coach after a decade as an assistant. Brother to Michigan State University assistant coach Tom Newton, Bill quoted Tom in describing how a coach never sits too far away on the bus from his goalie – and how he was careful to not let Lethemon too far out of his sight.

Nor did his teammates as they piled onto him moments after finishing their run.

“You can’t call me M.V.P. These guys played great the whole time,” Lethemon said. “I just made the saves I had to make.”