Being fewer in number, however, didn't prevent the Huskies from adding another championship to their already remarkable resume.

Despite a roster of only nine, Breckenridge won its third straight Division 4 Final on Saturday at Grand Rapids DeltaPlex.

It was the second time the Huskies had won at least three titles in a row. They captured six Class C/D titles over a span of seven years from 2000-2006.

“We were a smaller team this year, and we worked on that and knew how the score sheet worked,” Breckenridge co-coach Deb Gaines said. “Just doing everything we could to get all the points we could as a small team. We worked harder and turned over every rock to be stronger while also working on our vocals.”

There were benefits and difficulties involved with having a decreased number of girls, according to co-coach Jenna Graham.

“It’s easier for us to work with less girls, but on the mat you can’t hide anybody,” she said. “From player one to nine they all had to be stellar.”

The members of the team didn’t mind the low total. It helped create a tight unit that was determined to continue the program’s successful tradition.

“Having less girls does help because it’s less people you have to focus on and there are less personalities,” senior Madison Smith said. “Our team is so close, and I can say that these eight girls are my best friends.”

“I think we worked together better being smaller,” added senior Harley Conklin. “There were less arguments and we flowed really well together. Overall, we just clicked well.”

The Huskies clicked well early en route to the victory. They snared the early advantage with a score of 231.90 in Round 1.

“That was our goal,” Gaines said. “We knew we couldn’t be behind after Round 1. We were pleased with that, and we’re super happy. They did exactly what we’ve been practicing to do. To come out and deliver three great rounds, and that’s what they did.”

Smith said the Round 1 effort was a motivating factor.

“We knew we gave everything we had in that round so we knew we could do it for two more rounds,” she said. “This is the best feeling, and I hope every high school athlete gets to feel this.”

The program's 10th MHSAA Finals championship was particularly special for Gaines and Graham, who are mother and daughter.

Graham cheered for her mom in the early 2000s and was a part of three titles.

“It works awesome with us coaching together,” Graham said. “It’s special to share this together.” 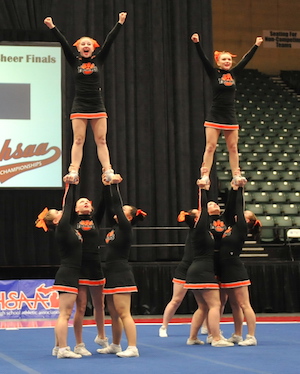 Added Gaines: “We’re on the same page. We have the same goals and the same outlook. This keeps us going.”

Hudson returned to the top two for the first time in seven years.

The Tigers placed runners-up in 2010, the last in a string of three straight second-places finishes from 2008-2010.

“It feels great to be second,” said 20th-year Hudson coach Kelly Bailey. “You watch a lot of teams be disappointed with runner-up, but if you’re getting a medal you are getting a medal and I have all the respect in the world for Breckenridge. They are a great program and to be that close to them … you can’t ask for anything more."

The Tigers secured their lofty finish by posting the highest Round 3 score (315.80) of the day.

“They did exactly what we asked them to do,” Bailey said. “Just have fun and don’t give up until the end. We never looked at scores. We just went out there and did our best.”