GRAND RAPIDS – Grand Ledge faced a possibility Friday at Kenowa Hills High School that none of its gymnasts had known before.

No gymnast on the team had experienced a high school loss. But the Comets were coming off a frustrating performance on their best apparatus, vault, and needed a strong finish to push its MHSAA team championship streak to five.

Senior Christine Wilson knew she’d do her share. But that would be the easy part.

“I’ve been doing the routines for so long now, I knew I had it. But the hard part was getting the girls to believe that they could do it. That was my job, just to get them going again,” the Comets’ lone senior said. “Because I know, after vault, and you’re behind, it’s really hard to pull yourself together when you’re under that much stress.

“Going for five, who does that?”

Grand Ledge went for it on the uneven parallel bars – and got it all. The Comets posted the meet’s top score on that apparatus – 37.325 – to finish with a score of 149.400 and edge Canton by 0.825 points to claim their fifth MHSAA championship. Kenowa Hills/Grandville finished third with 145.10.

“I basically told them we’re so much better than what we just did, and we’ve got to show everyone we can do it. You’ve got to start believing in yourself. Everyone else out here believes in you, but if you don’t believe in yourself, it’s not going to happen.” 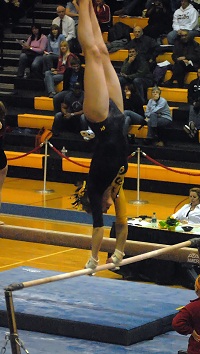 The fifth-straight title ties a record held by Ludington (1975-79, although Ludington was co-champion in 1979). It’s fair to believe that the Comets’ 75-event winning streak – counting both duals and invitationals – also is the longest in MHSAA gymnastics history. The last time Grand Ledge took the mat and didn’t finish first was at the 2007 MHSAA Final, when the Comets finished runner-up.

Wilson is the reigning Division 2 individual champion and favored today to win Division 1. Her all-around score of 38.650 on Friday was the Team Final’s highest. Three others posted scores above 36 – juniors Sara Peltier (36.025) and Lauren Clark (36.575) and sophomore Presley Allison (36.90) – and freshman Hailey French turned in a strong 34.925. The score of 149.400 was good for fourth in MHSAA Finals history and the team’s third-best during this five-season run.

It’s not like Grand Ledge totally failed on the vault. Its score of 37.050 was the second-best on that apparatus at the meet. But Canton had scored two tenths of a point more – a healthy amount in what was shaping up to be a close race at the top.

Wilson pulled her teammates into the hallway. She told them to believe. Grand Ledge coach Duane Haring followed with a little bit more of a fiery speech – one among many Wilson said she’ll always remember.

“I was sitting with the parents, and I told them I was really angry because … I think we’re the best vault team in the state. And they didn’t do it,” Haring said. “I just had to go for a walk because I can’t talk to them right now. I started to walk away, and I thought, ‘Oh yes I can.’ … Trust me; they were wide awake for bars. They understood.

“I knew they could do it. All year I’ve waited for them to do bars like that.”

Wilson scored a 9.8 on bars. But the key was Peltier – which scored a 9.7 and landed her dismount for just the second time in competition this season (and Wilson called the first time she’d landed it “lucky”).

Had Peltier missed her landing, it would’ve cost her seven tenths of a point. Add in another error, and that might’ve been enough to lose the lead.

“I felt pressured at first. But when all the girls started pulling it together and landing their dismounts, I didn’t feel as pressured,” Peltier said. “I knew we needed to do as well as we could, but I didn’t realize that it would make that big of an impact on whether we won or not.”

Canton also finished runner-up last season. But coach John Cunningham – who has coached the sport at the high school level since 1968 and at Canton since 1979 – called this team one of his most surprising. 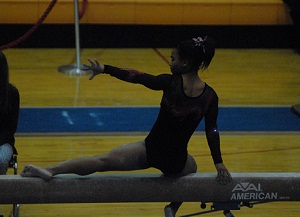 The Chiefs graduated six strong gymnasts after last season, including two school record holders. But this team broke the school's 2004 scoring record with a 149.10. Senior Ayana Lewis broke two event and the all-around records, including two that had stood since 1995.

“They were shockingly good. They didn’t get (just) a little bit better,” Cunningham said. “Everybody has just improved so much. When you have routines when the fifth score is a 9.0 and you can throw it out, and we’ve done that a bunch, it just shocks me.”

Freshman Joselyn Moraw had an all-around 37.650 to lead Canton on Friday. Sophomore Melissa Green had a 36.90 and Lewis had a 36.350. She’ll compete today in Division 1 – after finishing runner-up in Division 2 last season – but is one of just two seniors.

“It’s frustrating, yes. But you never know what could happen next year,” Lewis said. “It might be our year. Every year we step up one more. We get better one year after the next. I have really good hopes for next year.”

Senior Taylor Tepper scored an all-around 38.225 for Kenowa Hills/Grandville. Senior Alyssa Bresso had a 38.150 for fifth-place Farmington, and senior Chloe Presley had a 38.250 for sixth-place Highland-Milford.