EAST LANSING – Casey Peterson had allowed one run all season.

That total doubled with one swing of the bat.

Peterson, a junior left-hander and one of a plethora of stingy hurlers on the Gladiators roster, entered the tournament with a miniscule 0.15 earned run average. St. Francis pitching had recorded seven consecutive shutouts – and 17 (the fourth-highest total in MHSAA history) on the season -- leading up to Friday’s 3-2 Semifinal win over Schoolcraft.

Peterson was cruising in the fifth inning when he surrendered back-to-back singles with one out to Evan Ludwick and Payton Schuster, and then Minzey’s hard-hit triple that went directly over the head of St. Francis’ centerfielder.

“I told our assistant coach, Tom (Schuster), ‘This game is going to be won on a mistake,’” second-year Foley coach Greg Fettes said. “The centerfielder lost his footing, and that’s what wins us the baseball game. Between two great teams, that’s what’s going to happen. One mistake is going to cost you a game.” 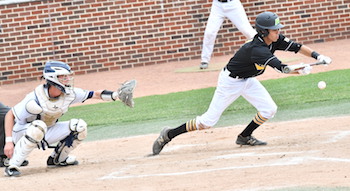 Minzey’s triple broke a scoreless tie, the Ventures added another run on a Justin Campbell RBI single, and then Campbell did the rest on the mound. The lanky 6-foot-4 senior lefthander, who has signed with Tulane, struck out eight and did not walk a batter in firing the complete-game shutout.

“That’s Campbell in a nutshell right there,” Fettes said. “That’s the guy you’re going to get day in and day out. That’s why I love when he’s on the mound. I’m going to be extremely sad to see him go, but I know he’s off to bigger and better things at Tulane and I know they’re getting one heck of a pitcher.”

Peterson gave up seven hits, struck out three and walked only one in a strong effort.

While the Ventures eventually got to Peterson, however, Campbell seemed to get stronger as the game progressed. Four of St. Francis’ six hits came over the first three innings, and Campbell retired nine in a row at one point, a streak that ended when the Gladiators put two on with two out in the ninth inning to bring the potential tying run to the plate.

“Very well-played game,” fourth-year St. Francis coach Tom Passinault said. “We knew going in that we’d have trouble scoring runs on the Campbell kid, so every pitch, every hit, every run was magnified. They strung things together at the right time, and we didn’t.

“Really proud of our kids. Been a great year.”

Conner Sweet had two hits to lead St. Francis, which finished with a school-record 38 victories against four losses.