The Grandville “G” on the front is patterned after Captain America’s shield, with the American flag trimming the bottom and stars and stripes on the shoulders.

There’s definitely a superhero quality to the sweater, fitting for a game played to remember Ryan, who died unexpectedly in his sleep 11 months ago the night before Grandville took on DCC in an MHSAA Semifinal. He had a heroic make-up; Ryan was truly an all-American kid, set to begin at the U.S. Military Academy at West Point in the fall, who excelled in class, on the ice and football field and was gifted with a big-picture understanding and personality that drew others to him. 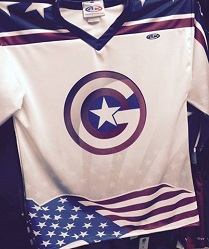 Connor sees his brother a little simpler – just a great guy with a goofy laugh, who like Connor clicked his heels when he walked. But to his younger brother, Ryan continues to mean so much more.

“Growing up … I realized I wanted to be like Ryan. I strived to be like him. He was my building block, my stepping stone,” Connor said. “People who knew Ryan, know Ryan and I are different in a lot of ways. Undoubtedly there are a lot of similarities, and if people are able to compare me to him in any way it’s the greatest compliment I could receive. Because that’s how I want to be. Who better to be like than Ryan Fischer?”

The “Captain America” comparisons used to get on Connor’s nerves a bit, but now he sees those comparisons as positive – ways others help his brother live on – just like he and the Bulldogs will this weekend when they play to help raise money for a pair of scholarships in Ryan’s name.

Grandville will face Detroit Catholic Central at 1:30 p.m. Saturday at Van Andel Arena, home of the Grand Rapids Griffins, a minor league affiliate of the Detroit Red Wings. Tickets cost $15, with a portion of proceeds donated to the scholarship fund that bears Fischer’s name, and one ticket gets fans into both the high school game and the Griffins’ game against the Rochester Americans at 7 p.m.

Grandville has a mighty following. The Bulldogs have drawn crowds as large as 1,400 this season – but they’re hoping for more than twice that many fans as they recall both a painful memory and a beautiful friendship formed with Fischer’s untimely passing.

Fischer was a co-captain of last season’s team and a leader in various capacities – he served four years on Grandville’s student government executive board and was a member of the MHSAA’s Student Advisory Council, among other duties. A senior forward, he played a main role in helping the Bulldogs to their first MHSAA Semifinal since 2001.

Fischer never woke the morning of March 7, an examination showing he died from an enlarged heart. At the urging of his parents, Scott and Roni, Grandville did face DCC that night. The Shamrocks won 3-0, and in one of the most memorable gestures of sportsmanship in many people’s memories, skated to surround the Bulldogs as they knelt after in front of their net while fans pointed both index fingers into the air to symbolize Fisher’s number 11. (See video below.)

Connor, then a freshman, was not on varsity last season; he is the only sophomore on Grandville’s top team this winter. He didn’t see last year’s game – but the significance of Saturday’s rematch is not lost on him.

“The first thing that went through my mind is DCC is a great hockey team, the best in the state. It’s a great chance to go out there, play a high level of hockey, play great competition,” Connor Fischer said. “But look past that, they’re people from across the state that really do care. They see something bigger than a hockey game, just as I do, just as my family does and the whole team does.”

The Fischers were not a hockey family until Ryan, at 3 or 4, saw a hockey game and thought it was “the coolest thing ever,” Connor said. Soon Ryan and Scott were building rinks in the yard every winter, and when he was about 4, Connor joined his brother on the ice. 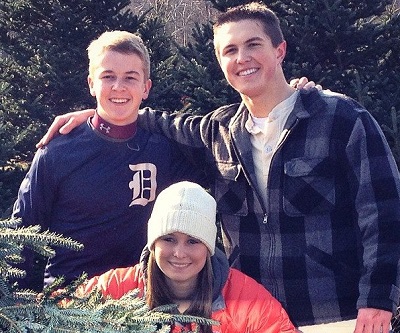 Their friendship was rooted as much in lemonade stands and playing Star Wars in the backyard as in sports. But athletics definitely provide a strong family tie. Older sister Kelsea is a sophomore gymnast for Division III power University of Wisconsin-Whitewater. Ryan also was a captain of Grandville’s football team, and Connor plays the same sports as his brother and has taken up lacrosse in advance of this spring’s season.

As younger kids, Connor was a tattle-tale. Ryan would get mad at him. “But when I was in middle school and he was a freshman, he realized I would be the only brother he was going to have. I’m beyond thankful for that, beyond thankful he realized that at such a young age,” Connor said.

“When he was with his friends, he’d say, ‘This is Connor. He’s the coolest brother ever.’ … It made me feel special, just like he always made everyone feel special.”

In Connor’s words, Ryan was a little bit more personable, Connor is more conservative but laid-back.

But they shared a similar way of thinking. Connor lives situations now that Ryan did a few years ago, and without always knowing for sure, he’s pretty sure Ryan handled them in similar ways.

Ryan’s death has made Connor grow to be much older than his 16 years. Like Ryan, Connor has early thoughts of following his parents into the military – both did ROTC at Michigan State University and were officers in the U.S. Army, and Connor is considering a similar route. But he feels no expectations to be Ryan, only to grow as himself.

“His maturity is well beyond his years, and he’s absolutely sincere in everything he does with it,” Scott Fischer said. “He’s had his own legacy, his own path, as much as he’ll always support the legacy of his brother.”

Among those Connor leans on are friends who are more like family. Grandville hockey coach Joel Breazeale lives just down the road, and the Fischers and Breazeale’s three sons have been friends since most of their lives.

The hockey team has become an extended family as well. Breazeale has coached nearly 30 years, and experienced losses of players from other teams. He’s watched as certain trigger points this season have brought raw emotions rushing back. But he’s also seen something like he’s never experienced with others he’s coached – a bond so strong that the competitive juices that might rule a locker room have been replaced by tolerance and understanding of each other’s personalities that point to the former teammate whose influence remains strong.

“It’s through the grace of Ryan and what all of these boys have shared,” Breazeale said. “They embrace each other, embrace the challenges they’ve faced together, and they move forward. They take on challenges with another perspective. They’ve just grown tighter, and those traits were synonymous with Ryan.”

Saturday’s game will be one of the final scheduled fundraisers for the Fischer scholarships, which will be given annually. Response has been tremendous and allowed for two awards – the original, which will go to a hockey player from the Ottawa Kent Conference this year and be expanded for players statewide in 2016, and a second for a Grandville High School senior. Both are for $2,500, and Scott hopes that as the fund grows, the scholarships also will grow to keep pace with increases in cost for higher education. 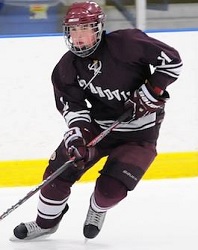 The hockey community has played a huge part. Grand Rapids Catholic Central coach Mike Slobodnik and former longtime East Kentwood coach Ron Baum piloted the scholarship foundation. When Breazeale mentioned the possibility of playing Saturday’s game at Van Andel, the Griffins’ management jumped at the opportunity to help and will open up ticket sales at the gate to give fans plenty of opportunity to attend.

There was never a doubt who Grandville hoped to play – from competitive and personal standpoints. The Bulldogs are 14-2-2 and ranked No. 8 in Division 1, with a chance to see how they match up with Regionals a month away.

“This made so much sense,” Breazeale said. “This is a big deal, that DCC made this investment to play Forest Hills Central (tonight) and then play us, and we appreciated that. Obviously our program has come a long way in the past 4-5 years, and for us to have become as competitive as we have been, it’s a nice acknowledgement that we’re moving into that realm. … No matter how the score ends up, it’s big for our program.”

A plaque commemorating Ryan was placed in Grandville’s football locker room this fall, near the door to the field. A similar smaller plaque hangs in Grandville’s hockey locker room at Georgetown Ice Arena; Connor and Thomas Breazeale are the last to hit the ice every day and always make sure to give it a glance.

Connor was ill at the start of this week, his temperature reaching 103 degrees. There was no way, he said Wednesday night, he wouldn’t get on the ice for at least a few seconds Saturday. But that’s it as far as personal goals for what will be a titanic matchup for his team.

“I don’t want to score a goal in his honor, nothing like that,” Fischer said. “Ryan always looked at the team before himself. There’s no better way to honor him than to help to win that game.”

Connor can’t say that it feels like this year has gone by quickly or slowly. He’s not sure how to describe it. The little things spin his mind to his brother – saying the pledge of allegiance, going past his old stall in the hockey locker room, or seeing the clock read 11:11.

He admits he was a little scared joining the varsity hockey team this winter, entering that locker room for the first time. But his teammates embraced him, and he embraced them. And Ryan’s No. 11 jersey hangs in Georgetown’s rafters, another reminder to all of them he isn’t far from their hearts.

"It’s amazing to know that.”

PHOTOS: (Top) Connor Fischer taps a plaque commemorating his brother Ryan before a junior varsity football game in the fall. (Middle) The jerseys Grandville will wear Saturday include a number of patriotic symbols including trim of the American flag. (Below) Clockwise from left, Connor Fischer, Ryan Fischer and sister Kelsea Fischer. (Bottom) Ryan Fischer was a captain for Grandville's varsity hockey team last season. (Photos courtesy of the Fischer family.)