With all Spring sports canceled for 2020 because of the COVID-19 pandemic, it’s been a season of recalling fond memories as we all sit and wait for the return of high school athletics in Michigan.

This time we’re diving 40 years deep to the Baseball and Softball Finals from 1980, which saw five of eight championship games decided by two runs or fewer and mostly on late-inning dramatics while played at various parks across the Lower Peninsula.

Here’s a flashback to the 1980 championship rounds:

A strong argument could be made that Matt Costello’s ninth-inning heroics rank among the top moments in MHSAA tournament history.

In the days when the state Semifinals and Finals were played on the same day, and split across four separate sites spread across the state, an impressive 1,025 fans turned out for the Class A title game between Royal Oak Kimball and Grosse Pointe North, hosted at Wyandotte’s Memorial Park.

For Kimball, it was the fourth appearance in the state title game. The Knights, led by coach Frank Clouser, had appeared in the Class A title game for three straight years, 1971-1973, earning a championship in 1972 with a 3-1 win over Detroit Western.

It was the first appearance in the Finals for North and coach Frank Sumbera. Earlier in the year, the Norsemen had been the top-ranked team in the Michigan High School Baseball Coaches Association Class A poll, but the squad hit a mid-May speedbump. Within five hours, North dropped two games, falling to St. Clair Shores Lakeview, 6-5, then 3-2 to Harper Woods, which was undefeated and ranked No. 1 in Class C. North rebounded, and finished the regular season as the top team in the Class A rankings with a 23-4 mark.

North opened the championship game scoring with three quick runs in the first inning. Kimball made it 3-1 in the bottom half of the inning, then grabbed a 4-3 lead in the third as 6-foot-4 senior Dave Kopf, (a 32nd-round draft pick of the Detroit Tigers one week earlier) crushed a three-run homer. North tied the game at 4-4 in the sixth when junior Bill Babcock led off with a double, moved to third on a sacrifice, then scored when the throw to first base on Keith Schatko’s suicide squeeze bunt went wild. Following a pop out, Costello picked up his first RBI on the day, on a double over the left fielder’s head that scored Schatko, giving North a 5-4 lead. 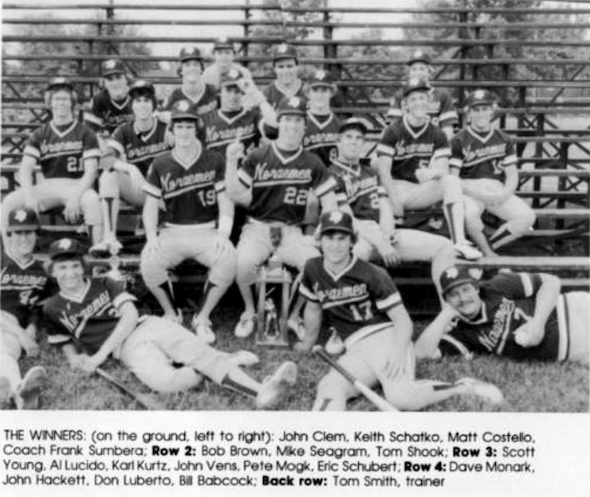 Babcock, who had tossed a 2-0 no-hitter earlier in the day in the Norsemen’s Semifinal against Wayne Memorial, replaced starter Tom Shook in the bottom of the sixth inning. Following a walk, Kimball’s Scott Sturley smashed a two-out triple to tie the game, 5-5.

Neither team could push across a run in the last inning of regulation play. Kimball threatened in the bottom of the eighth, notching a leadoff double. But the danger ended when North catcher Mike Seagram picked off the runner.

Sumbera told Wright Wilson of the Grosse Pointe News that the play was the “turning point of the game.”

Singles by Babcock and Scott Young and a walk by Al Lucido in the top of the ninth inning set the stage for Costello.

“I had Matt swinging away because they were charging their infielders all the time, so we were playing for the hit,” said Sumbera to the Detroit Free Press following the title contest.

“I was just trying to get the run in when I went up there,” stated Costello, who “cracked a 2-2 pitch over the left field fence, more than 365 feet away.”

“When I hit it I knew it was going to be a home run. That was the greatest.”

Costello finished with three hits and an MHSAA championship game-record five RBIs, a mark that stood alone until Jacob Holt from Muskegon Catholic Central tied the record 35 years later, in 2015.

Trailing 9-5, Kimball loaded the bases in the bottom of the ninth inning and scored a run on a two-out wild pitch. But a pop-out to first ended the rally, and North grabbed a 9-6 win and its first diamond title.

Sumbera , who had taken the reins of the North program in 1973, would lead the Norsemen to a second title in 2006. Today, he ranks third in all-time baseball victories in Michigan after a 45-year coaching career.

Powers took a 7-4 lead in the sixth inning and upped the lead to 8-4 on a Mike Morgan bases-loaded single in the seventh. With the game on the line, Mount Pleasant’s Scott Tuma blasted a two-out, three-run homer to cut the margin to 8-7. Morgan, who tossed a five-hit shutout complete game for Powers in its win over Farmington Hills Harrison earlier in the day, allowed two more runners before striking out pinch-hitter Todd Tuma to end the game.

Rain delayed the second Class C Semifinal game and postponed the championship contest until Monday, June 16. Leading 5-0 after three innings, Dundee finished off Lansing Catholic Central 7-2, then topped Parchment 3-1 for its first and only baseball crown. Norm Pentercs, who would later pitch at Grand Valley State, struck out 11 and allowed only four hits in the title game. Those games were played at Broome Park in Flint.

A seventh-inning walk-off bases-loaded single by Scott Trudell broke a 1-1 deadlock to give Grass Lake a 2-1 win over Muskegon Western Michigan Christian in Class D, hosted at Marshall High School. David Knoll allowed just three hits and struck out 13 for the win. It was the second appearance in a Final on the year for WMC, which fell to Detroit East Catholic in an MHSAA basketball championship game in March.

Veronica Miller’s single with two outs in the fifth inning drove home Julie Guerra, snapping a 1-1 tie and propelling Flint Carman to a 2-1 victory over East Detroit and all-state pitcher Roxanne ‘Rocky’ Szczesniak in the Class A championship game. Linda Allen picked up her second win on the day. Earlier she tossed a shutout in Carman’s 14-0 victory over Holland West Ottawa. Szczesniak, who would later star at Wayne State, allowed only three hits in the contest after delivering a one-hitter in East Detroit’s 11-3 victory over Ann Arbor Huron in the Semifinal.

“Everything worked great for me today,” Deanne Moore told the Lansing State Journal after tossing a two-hit, 6-0 shutout in Fenton’s Class B Final victory over Grand Rapids Northview. “I knew I had to pitch strikes and my fastball was moving around. I threw a couple of changeups to keep them guessing.”

In the title game, Moore opened the scoring with a solo home run in the second inning. It was followed by a triple by Sandy Thornton, who scored when Theresa Flynn singled up the middle. Moore scored again in the fourth inning following sacrifices by Sue Mora and Flynn, for a 3-0 lead. Northview’s fate was sealed in the fifth as Fenton tallied three more on Thornton’s two-run single and a fielder’s choice by Lori Glass.

It was the third-consecutive Class B title for the Tigers. Moore, a senior righthander, finished with a 24-2 record and would go on to an All-American career at Michigan State, earning entry into MSU’s Hall of Fame in 1996.

Rhonda Thran added her name to the MHSAA Championship Game Record Book, knocking in five runs as Berrien Springs routed Lakeview 11-4 in the Class C title game. Thran matched the RBI record set by DeWitt’s Cindy White in the Panthers’ Class C title victory over Center Line St. Clement in 1977. The sophomore centerfielder, along with second baseman Jan Dowell, was one of two regulars who were also starters on the Shamrocks’ volleyball team that won the Class C championship during the 1979-80 winter sports season. 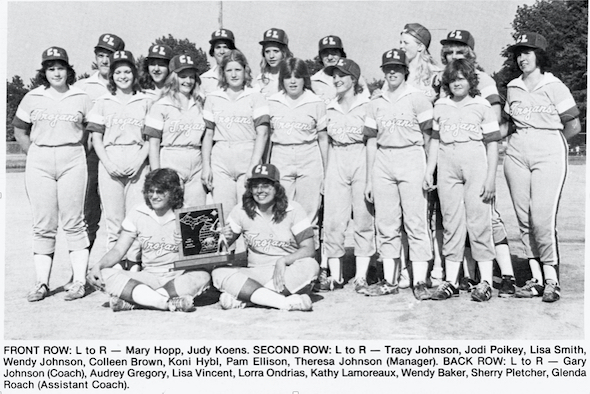 Junior Cindy DeFay fired a three-hitter in the championship. “The whole team really wanted this one. I had a good feeling that we were going to win so I was ready to play. It’s the best game I’ve pitched all year,” she told Jack Walkden of the Benton Harbor Herald-Palladium following the game. DeFay had “missed much of the first half of the season with a severely sprained ankle.”

In the Semifinal, Berrien Springs downed Leroy Pine River 10-8 and banged out 21 hits across the day’s two games, highlighted by five hits by both Rachel Roots and Sheila Duffel, followed with four by Thran.

A police escort guided the team and its retiring coach, Roy Rennhack, back into town after the games played across the state in Oak Park near Detroit – “More than 150 cars joined the caravan, which paraded the team through town atop firetrucks.”

“It was a perfect going away present,” said Rennhack.

It was truly an amazing sports year for the Shamrocks girls, who also won Regional titles in track and basketball. Between 1979 and 1985, Berrien Springs volleyball teams won five Finals volleyball titles. (Those squads were honored in the second year of the MHSAA’s Legends of the Game program in 1999).

In Class D, Central Lake scored a dramatic 2-1 win over Vestaburg. In the top of the seventh inning, Vestaburg had knotted the game at 1-1 before relinquishing a walk to Pam Ellison in the bottom of the inning that set things in motion for the Trojans. Ellison stole second, then advanced to third on a sacrifice by Wendy Johnson. Following a walk to Wendy Baker, catcher Mary Hopp singled Ellison home for the win. Central Lake had finished as state runner-up to Laingsburg in 1978, then fell to Morenci 6-5 in the Semifinals in 1979.

“We were a pretty close-knit team,” said Ellison., recapping the rally.

“I had fantastic kids,” recalled coach Gary Johnson 40 years later. “We played a lot of big-time schools. I never had a second pitcher when I coached. Back then, if you had a girl who could throw a fastball you were at the top of the world. We had Judy Koens.“

Koens allowed just four-hits in the title game and along with Hopp was named to The Associated Press Class D all-state team as Central Lake finished 33-4. Koens would pitch at Central Michigan, posting stellar ERAs during her four seasons and earning all-Mid-American Conference honors in 1984 as a senior.