It was much simpler than that: Just win one game.

Although records don't exist for such things, it's safe to assume that Regina is the first team to win an MHSAA championship after starting a season 0-8 (without forfeits).

The journey from frustration to elation concluded Saturday with a 5-0 victory over Caledonia in the Division 1 title game at Michigan State University.

Regina finished with a 27-16 record but more importantly, was 7-0 during the MHSAA tournament. The Saddlelites allowed only eight runs and had three shutouts in those seven games.

Once Regina's record hit 3-11, a team meeting was convened.

"We talked about, 'Hey, we have a lot of team talent. Why waste it this year?'" said senior pitcher Marissa Tiano, who pitched a two-hitter and struck out nine against Caledonia.

It was the kind of start that Regina's players can make light of in retrospect.

"We actually made jokes about it," said Regina junior Nicole Roeske, who was 3 for 3 in the Final. "It's a whole different team, like a family now. At the beginning, we were frustrated with losing."

Legendary Regina coach Diane Laffey said that, in her role as athletic director, she was partially to blame for the slow start. 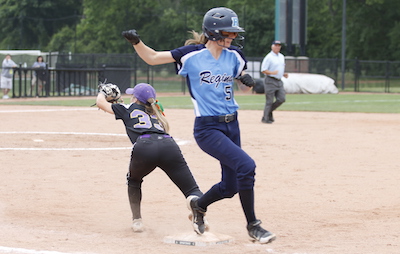 "I was probably stupid," said Laffey, who has won 1,066 games in 45 years as Regina's coach. "I front-loaded the schedule and probably shouldn't have. Of those eight losses, two were to Mercy, two were to Ladywood, two were to Romeo, two were to Dakota. Those are all good teams. We weren't losing to flukes, but it gets really frustrating."

The only frustration Saturday was experienced by the Caledonia hitters, who couldn't get to third base and reached second only twice. The Fighting Scots' most reliable way to reach base was getting hit by pitches. They were hit three times, walked twice and had only two singles.

"We didn't show the kind of team we are today," Caledonia coach Tom Kaechele said. "She had us guessing up there. We just didn't adjust, but that's the game of softball. That's why you compete at this level. We just played at the highest level we could in Division 1, and there are 199 other schools who would like to be here just like us."

The game was scoreless through three innings before Regina broke the deadlock in the top of the fourth. Roeske led off with a single and scored on a two-out triple to right-center field by Hailey Reese.

"Knowing my team, I knew all we needed was one big hit and we'd win the game," Reese said. "I had faith in them."

The Saddlelites busted it open with a four-run fifth inning.

On a 3-2 pitch, Riley Hison lined a double deep to left field to score two runs. Hison moved to third on a throwing error and scored on a pitch in the dirt. Sydney Spatafore scored the final run of the fifth just before a tag on a runner going from second to third ended the inning.

Caledonia (34-5) had batters hit by pitches in each of the last three innings, but neither got past first base.

Regina has a 6-0 record in MHSAA Finals, winning its first title since going on a four-year run from 2004-07.

"Our picture goes up in the gym along with the other ones," Tiano said. "It feels great."

Caledonia was playing beyond the regional round for the first time.

"We're disappointed, obviously," Kaechele said. "This team has overcome a lot of adversity this year. To be 34-5 is an awfully good season. I told them to make sure you celebrate this moment and look at the accomplishments you've had this year. We've never been here before. We've never won a Regional before. You need to celebrate that for the program, the community and yourselves."