When the Hudson High School athlete began making a list of whether she should commit to Western Kentucky University on a volleyball scholarship offer, she couldn’t find any cons.

“There are literally no cons for Western,” she said. “It checks off all the boxes. There’s no place I’d rather be going. … It was the only place that gave me intense butterflies.”

Bauer is only a junior, so Western Kentucky will have to wait on her volleyball skills. For now, they are on display in southeast Michigan and the Lenawee County Athletic Association. And, those skills keep getting better. As a sophomore, she was a unanimous all-LCAA first-team selection, selected as the Lenawee County Player of the Year and made the Michigan Interscholastic Volleyball Coaches Association’s Division 3 first-team all-state squad.

“It’s sort of funny that around here people know her for hitting, but she’s going to college as a setter,” said her mother, Tricia Bauer. “Who knows? Maybe when she gets to Western Kentucky, they’ll see her as a hitter.”

Her mother, who played on Hanover-Horton’s Class C championship team in 1989, was Callie’s first volleyball coach. Callie started at the YMCA in Adrian as an 8-year-old.

“My mom definitely spurred it in me,” she said. “I think I just had a knack for it.”

As she improved in volleyball, so did her playing opportunities. She joined a Toledo, Ohio, club program for the offseason and eventually began playing with Impact Volleyball Club out of Fort Wayne, Ind. It takes nearly two hours to get to Fort Wayne for practice three nights a week, but it’s been a great experience, Bauer said.

“It’s pretty far to drive,” she said. “But, it’s the coaches, honestly. It’s a small club, just two teams. Everyone drives that far to be a part of it. I’m not the only one. The girls there are so good.”

Most of the drives from Hudson to Fort Wayne are with her mother. Last season Bauer also played basketball in the winter, which made for some hectic nights. After school, she’d go to basketball practice, then jump in the car and head to Fort Wayne for volleyball. On most of those nights, she’d get home after 11:30 p.m., shower and start all over the next day.

Club volleyball also has produced a lot of family time for the Bauers. This past club season, the family tagged along on trips to Chicago, Louisville, Indianapolis, St. Louis and Florida. 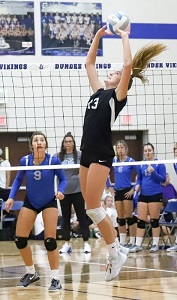 “It’s a great time to be together,” said her father, Jim Bauer. “We just get all packed in the car and drive. It’s a lot of good family time. You look forward to it.”

Jim Bauer played basketball at Hillsdale College before jumping right into coaching. Between his years at Pittsford and Morenci, he accumulated more than 200 wins. His 2014-15 Morenci team made it to the Breslin Center and played for the Class D championship. He stepped away from coaching basketball a couple of years ago to be sure he didn’t miss out on watching Callie play.

Being brought up in a house with two coaches has been a good experience, Callie said.

“When I first started, they would get on me more,” she said. “Now they are just supporters. I get my competitiveness from them. But, I’m hard enough on myself. I’m my own worst critic. They don’t need to be hard on me.”

It’s hard to find too much fault in Bauer’s game. This month she was named to an elite preseason All-American volleyball list.

“I was super happy about it and proud of it, but I kind of put it in the back of my mind,” she said.

Her dad said seeing her name on that list was special.

“I don’t think she realizes the magnitude of being on an ‘All-American’ list,” he said. “When I was a player, I couldn’t dream of making an All-American list. It’s amazing, really.”

Bauer isn’t worried about burning out of volleyball even though she plays year-round. When she feels herself getting to that point, she knows what to do.

“This past summer I had one of those experiences,” she said. “I was at a volleyball camp, where you eat and sleep volleyball the whole seven days. It was a lot. … When I get to that point, I take a step back and I don’t go into the gym for a week. I’ll go biking or painting or just do something else. I spend a lot of time doing volleyball, so I have to be careful.

Being committed to Western Kentucky – the second-winningest Division I program in the nation over the last 10 years – has taken some stress off Bauer’s shoulders.

“Now that I’m committed, club volleyball is less stressful for me. When you go to the tournaments, you see the college coaches on the sidelines and you think, ‘Oh boy, I hope they like me.’ Now that I have that secured and everything, I just play.

“I have a lot of work to do before I get there. I’m not going to step back. I’m probably going to get into the gym more now that I am committed. It’s a whole different mentality. It’s not so much just doing it for my high school team or club team or anything. I have something I can look to on the horizon. Two years from now I’m going to be playing against college teams. I’ve got to get ready. It’s another layer of motivation.”

Hudson is coming off a 38-win season but is younger this fall. As a two-year starter already, Bauer will be looked to by Tigers coach Shelly Hoard to be more of a leader.

“She’s continued to improve her game,” Hoard said. “She is definitely bringing a lot more leadership this year. She’s a great team member. Her whole understanding of the game, people’s roles and people’s capabilities and the opponent is better.

PHOTOS: (Top) Hudson’s Callie Bauer, one of the state’s top juniors, fires a serve. (Middle) Bauer sets for a teammate during a match against Dundee. (Top photo by Matt Sisoler; middle courtesy of the Bauer family.)