The Fighting Irish – eliminated in a Quarterfinal a year ago – took on and beat many of the best in Michigan this fall. The perfect run included victories over five ranked teams in Class B and three of the top four in Class A including champion Novi.

"I remember our first practice when we made goals for ourselves: beat this team, make it to states. And I think we surprised ourselves to actually go through the season undefeated,” Gabriel Richard junior outside hitter Jurnee Tipton said. “We always had the talent last year, but I don’t think we knew what to do with it as much. This year, working on that and working on being focused, helped us.

“I think our talent was always there. We just needed to know how to work with it.”

And that said, Tipton admitted it still hadn’t sunk in what she and her teammates had accomplished. Coach Mayssa Bazzi said it might not for years to come.

That makes sense – the youngest Irish (42-0) might not have been born when Marysville completed its perfect 1998-99 run. 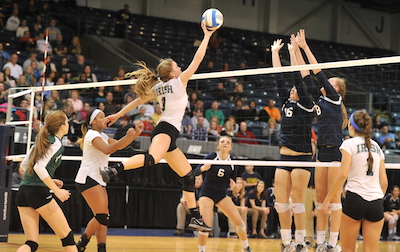 Gabriel Richard was among the final eight in Class B last season, finishing 22-7-1. But a series of wins this fall – first over Novi in the second tournament of the season, then over Class A semifinalist Grand Rapids Christian in the final at the Beast of the East tournament in October – convinced anyone watching that Gabriel Richard might have history-making in its future.

“My team has blown my expectations out of the roof,” Gabriel Richard senior Emily Tanski said. “I’m so thankful.”

The Irish lost only four sets all season and none during the MHSAA Tournament, even as expectations and anticipation continued to build.

In only three sets Saturday, Tipton had 26 kills hitting an incredible .658 with only one error. Tanski added 23 kills, and junior Emma Nowak had 50 assists – fifth-most in an MHSAA Final.

Junior Olivia Fike had 13 kills and freshman Allyson Severance had 11 to lead the Broncos (57-12-2).

North Branch coach Jim Fish said his team tried to leave other hitters open to persuade Gabriel Richard to go away from its big two. The Irish didn’t follow.

Gabriel Richard never trailed in a set by more than three points, and scored 14 straight points – the final five of the second set and first nine of the third.

“We played maybe the best we played all year, and we still couldn’t (stop them),” Fish said. “I’m glad we didn’t give up. I told them, that’s what they do. They just wear on you and teams give up. We’re not going to give up.

PHOTOS: (Top) Gabriel Richard players rush toward coach Mayssa Bazzi as she presents the Class B championship trophy. (Middle) Emily Tanski (3) pushes a ball over the net for the Fighting Irish.