GAYLORD – Gaylord had reason to celebrate over the holidays.

The Blue Devils, ranked No. 6 in Division 2 by Michigan Grappler and the Michigan Wrestling Association in their pre-holiday wrestling poll, ushered in 2016 with strong showings in the Tournament of Champions at Goodrich and the Grand Ledge Invitational.

Gaylord placed second to No. 2 St. Johns, and finished five points ahead of No. 5 Goodrich, in last Wednesday's loaded 16-team field at Goodrich.

Over the weekend at Grand Ledge, Gaylord edged No. 3 Eaton Rapids 37-36 despite missing three starters.

The results left head coach Jerry LaJoie feeling quite pleased with how his team is progressing.

"If we can keep everyone together, and healthy, we could make a nice push by the end of the year," he said.

The Blue Devils advanced to the Division 2 Semifinals a year ago in the MHSAA team competition. After beating Flint Kearsley in the Quarterfinals, Gaylord fell to eventual champion Lowell. Lowell then downed Eaton Rapids for the title.

Dominic LaJoie, currently 20-0, is ranked No. 1 in the state at 119 pounds. Jerry LaJoie said his son's mental makeup on the mat has helped propel him to the top.

"He analyzes everything," Jerry LaJoie said. "He's a thinker. If something doesn't go right, like a technique, he works (to correct it). He's meticulous. And he's one of the hardest workers in the room. It’s like World War III watching him and (training partner) Jon Martin in practice."

Then again, practice makes perfect, right? That's been the case, so far, for LaJoie under his father's tutelage.

LaJoie is not the only standout on the squad – a fact not lost on the junior. 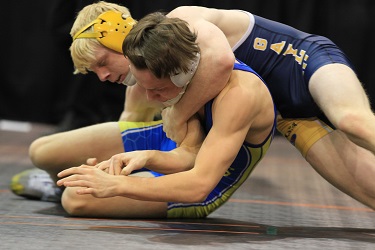 "I don't want the injuries to become an issue when we get towards the end of the year," Jerry LaJoie said. "We need to let them heal up."

Foster, an Individual Finals qualifier a year ago, was injured in leading the Blue Devils to a football playoff berth. He's been in and out of the lineup, finishing second in the Marquette Challenge and Tournament of Champions.

An unsung hero on the team is captain Tristan Blanzy at 152 pounds.

"He's keeping everyone together, leading by example," Jerry LaJoie said. "He's not one of the stars. He's just a kid who has come up through the ranks and worked hard for everything (he's achieved). He's done it the old school way."

So what's the strength of this team? LaJoie doesn't hesitate in answering that question.

"We're really good on our feet," he said. "We score a lot of takedowns. We're aggressive."

LaJoie is in his 22nd season as Blue Devils coach. He arrived at a time when rival Ray Arthur had the Petoskey program rolling.

"We had some good teams, and Ray kept knocking us off," LaJoie said. "Ray is the guy who got me up every morning to figure out how to beat him."

Arthur, who stepped down in 2010 after 31 seasons, led the Northmen to 685 dual meets wins, sixth all-time in MHSAA history. His 1996 team won the Division 2 championship.

He set the bar high for LaJoie and the Blue Devils, who have now taken over as the perennial powerhouse in the Big North Conference.

"If it wasn't for him (Arthur), I don't think we would be as good as we are," LaJoie admitted. 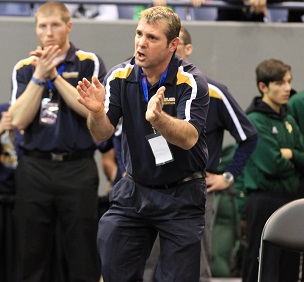 "There's no secret to our success," Wilson said. "It's the time and dedication that he's (LaJoie) put into it, along with all of our wrestling assistants. They're often here from the time school gets out until 9 or 10 at night working with kids.

"Wrestling is one of those sports where you can't hide. The cream rises to the top. It's something they've put a lot of effort into."

Wilson said LaJoie is a strong motivator, too.

"He relates well to all the kids," he said. "The kids want to wrestle for him. They want to do well for him. His practices are not easy, but they know in order to compete they have to put the time in (training). He has high expectations, and those kids reach for it."

How high can they reach? That question will be answered in the weeks ahead, but LaJoie believes anything is possible.

"I think we can make a run if we can stay healthy and get a few breaks along the way," he said. "(Top-ranked) Lowell and St. Johns are tough teams, but a lot can happen between now and then."

Especially for a team trending up.

PHOTOS: (Top) Gaylord’s wrestling team takes part in the pre-match march before last season’s Division 2 Quarterfinals at Kellogg Arena. (Middle) Jon Martin (top) wraps up Dakotah Leland of Flint Kearsley during their match at 130 pounds. (Below) Coach Jerry LaJoie is in his 22nd season leading the program. (Click for more photos from HighSchoolSportsScene.com.)