GAYLORD — The town of Gaylord is surrounded on all sides by more than an hour of northern Michigan roads and landscape.

But when it comes to high school wrestling, Gaylord is like an island.

Few wrestling programs in the northern Lower Peninsula are on par with the Blue Devils, who have made team success an annual occurrence and churned out elite individual performers year after year.

“Everyone who wrestles us, they know they’re going to get a battle,” said Gaylord head coach Jerry Lajoie, who is entering his 24th season leading the Blue Devils. “We’ve been to the state tournament several times — three or four times in the semis, a couple more times in the quarters and one time in the finals. Last year we put out two state champs and three other medalists. Not bad out of 14 weight classes for us.”

As good of a run as Gaylord has had in wrestling — the Blue Devils are working on a string of consecutive Big North Conference and District championships that goes back more than a decade and have won Regional titles in three of the last four years — last year was the program’s best. As a team, the Blue Devils advanced to the Division 2 championship match for the first time and had Chayse Lajoie and Derek Giallombardo reach the pinnacle of the Individual Finals at Ford Field, winning championships at 112 and 125 pounds, respectively. Gaylord had five others qualify for the Individual Finals, with Joe Markham third at the 285-pound class, Jacob McKnight fourth at 140 and Cade Foster sixth at 171.

“It was a great environment to be in,” said John Sosa, who was among Gaylord’s seven individual state qualifiers in 2018 and a Finals placer as a freshman in 2017. “Everybody wanted to be there. Everyone put in 110 percent, and it showed at the end of the year when we were in the state finals match. Everyone was willing to work. I could pick anyone in the room and everyone would give 110 percent, which I very much appreciate.”

The Blue Devils are motivated by last season’s 43-17 loss to five-time reigning Division 2 champion Lowell in the Final and are hoping to replicate their trip this winter, with perhaps a different result in the last match.

“We’ve got a team that I think we can get back to team states with,” said Jerry Lajoie. “We’re going to be focusing on winning conference, then Districts and Regionals. Once you get (to the Finals), you never know what can happen.” 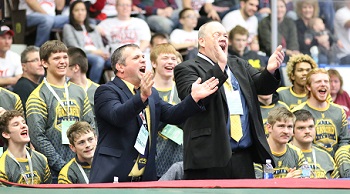 The challenge will be replacing seniors like Giallombardo, Markham and 160-pound individual qualifier Nick Brewster. This year, more than half of the 33 grapplers on the roster are freshmen. That prevalence of youth doesn’t faze a veteran coach like LaJoie.

“We just had this discussion when we had a meeting on Wednesday — we’re starting a lot of young kids,” he said. “I said, ‘I don’t care if you’re a freshman or not. Expectations are the same. We’ve had freshman state champions. Why not you?’”

The Blue Devils are fortunate to be able to lean on veteran leadership while they get their younger group ready to compete at a high level. Foster is back as a senior to handle the 171 or 189-pound division, and the junior class led by Chayse Lajoie, who can wrestle anywhere from 119 to 130, Sosa (125 or 130) and McKnight (152 or 160) is strong and figures to rack up a lot of wins over the next few months.

“I’m just hoping our team can push through and make it to states again, and hopefully contest for the state championship again,” said Chayse Lajoie, the most accomplished member of the squad as a two-time MHSAA individual champion as well as a Junior Greco-Roman national champ at 120 pounds. “We’re just trying to get everyone together right now. Towards the end of the season we’ll start focusing on that. We kind of take things step by step.”

Hard work is the most common response the Blue Devils give when asked what it takes to become an exceptional wrestler, and that helps explain Gaylord’s success – there’s no shortage of work ethic in Gaylord’s wrestling room. Lajoie demands that and dedication, though he also makes sure wrestling is fun for his team, too. With all of those factors in the equation, he doesn’t have much trouble getting his squad to meet the expectations of the program.

“Kids are probably the best judge of character out of anybody. More so than adults,” said Lajoie. “They figure out if you care about them or not. And if you do, they’ll buy in.”

It doesn’t take Gaylord’s wrestlers long to realize their coach is willing to put in just as much time as they do, creating a mutual respect that strengthens the bond between coach and athletes.

“He’s a great guy,” Sosa said of Lajoie. “Very appreciative that we can give him our time. He says, ‘If you give me your time, I’ll give you mine.’ Very knowledgeable on and off the mat. You can call on him any time of the day, and he’ll help you out.”

The end result is what has become a wrestling dynasty in northern Michigan, built from the youth level up with a group of kids who take pride in being from Gaylord and everything for which the wrestling program stands.

“We only have so many kids to choose from, and no one in our area,” said Jerry Lajoie. “You can’t move five minutes and go to a different school. That’s where our badge of honor is. We’re up here, we’re all local boys — let’s go battle.”