ESCANABA — Gerry Smith put his life into helping area youngsters get a foot into the athletic doorway, and in the process touched the lives of so many people.

“God got a great softball coach,” said retired Gladstone athletic director Matt Houle. “He was unique and old school, but his love for kids and the game always showed clearly. He had such a passion for the game of softball and just loved working with kids.”

Smith, 70, worked at Mead Paper Co. for more than 30 years and was IBEW 979’s business agent for 21 years. But he will perhaps be most remembered for his 43 years on softball and baseball fields throughout the area. He spent 11 years as Gladstone High School’s head softball coach, directing the Braves to MHSAA titles in 2004 and 2009. He was 290-77-1, but missed much of the 2008 season because of shoulder surgery. The Braves were 31-10 under interim manager John Malloch, which would give Smith an overall 321-87-1 record.

“He put a lot of trust into people he asked to help him out,” said Ashley Hughes, who succeeded Smith in 2014 and guided the Braves to the MHSAA Division 3 title that year.

Hughes, who joined Smith on the softball staff when she became a teacher at her alma mater in 2009, also pitched for Smith and the Braves before getting a softball scholarship to Lake Superior State University.

She recalled Smith sought her services when she returned to Gladstone. “Hey kiddo, how about helping us out this year,” is how Hughes remembers that conversation.

He then told her, “I’m going to teach you everything I know and in a few years this will all be yours,” Hughes related.

“For me to come as head coach after Smitty, there was so much pressure. I wanted to live up to everything he had provided for this program,” Hughes said. “I didn’t want to disappoint him. He put a lot of faith in me.”

She said Smith also had an impact when she was a player. “He was so in your face in such a positive light. He wanted you to be successful, whether you had never touched a ball or had the ability to go on to play college ball. He was a spit-fire. He was so intense.

“He just exuded passion, at practice, at games. He had so much love for the game. That is something I’ve held onto because I too loved that game. To have someone like Smitty be so passionate and intense helped me become passionate and gave me the drive to be like that.”

Bill Buchmiller and Smith were partners for 40 years and he became godfather to Buchmiller’s children. In addition to guiding the Braves’ high school varsity, they served as American Legion coaches in the early stages of Gladstone’s program, worked together as Little League coaches and were softball teammates.

“He took a program from nothing to two state championships,” said Buchmiller. “He always encouraged the group. He may have broke them down a little bit but he always built them back up. He was a hard guy to get to know, but once you got to know him, he was a great guy.”

Smith used the knowledge he had gleaned from many years as a player and infused that into his players. “He just dwelled on the basics of softball. If you had to play small ball to win, that is what he played,” said Buchmiller. 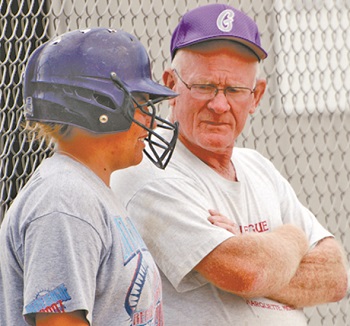 “He covered all the different bases of softball. He stressed defense. He told (hitting coach) Al Verbrigghe, ‘You give me one run Al and we’ll win the ball game with my defense. Give me a run and we’ll manage somehow.’”

Theresa Shepeck, who joined Smith on the GHS staff in 2003, agreed with that assessment.

“Smitty always thought the short game was the way to go,” she said. “It was about bunting, not the long ball. You get a runner on one, you bunt her to two. You get somebody on three, then you suicide (bunt) her home.”

Shepeck said his players thrived on his various idiosyncrasies, such as finding tourney lodging in rather inexpensive motels and using a wad of cash to pay for the team’s rooms. “The kids just yukked it up,” she said with a laugh.

“He always put the kids first. If somebody made a mistake, it was never their fault; it is my (Smith’s) fault, the coaching staff’s fault. If one of us coaches made a mistake, he took that blame. It was always his fault, his responsibility,” said Shepeck.

The players appreciated how he used them in games and practices. “His philosophy was to put the best nine on the field, period,” she said. “He walked on a lot of toes, he had a lot of hurt feelings (of parents), but I think the kids respected that. Nobody ever doubted how they fit in. He was there to win.

“He was a little man (about 5-foot-6) but had a huge heart. He was all about the kids and the coaching staff. It was an honor to learn from him, to be in his presence, to be a mentor to the kids.”

Hughes agreed, noting “he had a way of figuring out what the team needs are and re-arranging the players (duties). He knew the players’ strengths and was always looking out for the entire team.”

Smith’s career record likely could have included more wins if he didn’t use the season’s first month to shuffle personnel while building for the postseason. It paid off when it counted the most as the Braves reached at least the Quarterfinal level each of his 11 seasons.

“He was definitely not afraid to experiment,” said Hughes. “He knew the rules of the game and he was always looking for more (from his players). He was an aggressive coach, and the girls who love the sport really grasped at that. He utilized every player on his roster.

“He didn’t have to say too much, but you always wanted to answer him and make him proud and prove to him that you can come through.”

Houle summed up Smith’s legacy when he said, “He was the person that put Gladstone High School on the map in high school activities. He will be dearly missed by so many. He touched so many lives.”