By Kelsey Pence
Special to Second Half

EAST LANSING – On Friday, Gladstone pitcher Tinner Sharon gave up back-to-back home runs to Coloma in the seventh inning before the Braves came back in the eighth to win their MHSAA Division 3 Semifinal.

On Saturday, Sharon found herself in a similar position – Gladstone led undefeated Unionville-Sebewaing by a run and needed only three more outs to secure the third MHSAA title in program history.

She was anything by nervous.

Sharon struck out all three Patriots she faced in the bottom of the seventh inning, icing a 2-1 win and the Braves’ first championship since 2009.

“After being in the seventh inning (Friday) when they jacked the two homeruns, I was probably the least excited on the field actually,” Sharon said. “I was so focused.”

Sharon’s tournament has been a bumpy ride. She injured her ankle in Friday’s Semifinal while in the pitching circle.

“She knew she wanted to play today,” Gladstone coach Ashley Hughes said. “She is one of the most focused kids I know, and she was coming in here big and focused. It’s just amazing what that girl can do and what she can endure. She is a rally girl out there and got the troops ready in the seventh inning.”

Sharon tripled in the first inning and scored on a sacrifice fly by Sadie Strasser. But USA’s Allison Hoppe doubled and eventually scored to tie the game in the Patriots’ half.

“I knew they were going to be tough competition, but these girls were in it every step of the way,” Hughes said. “We lost to them in the quarters last year, and our girls wanted revenge.” 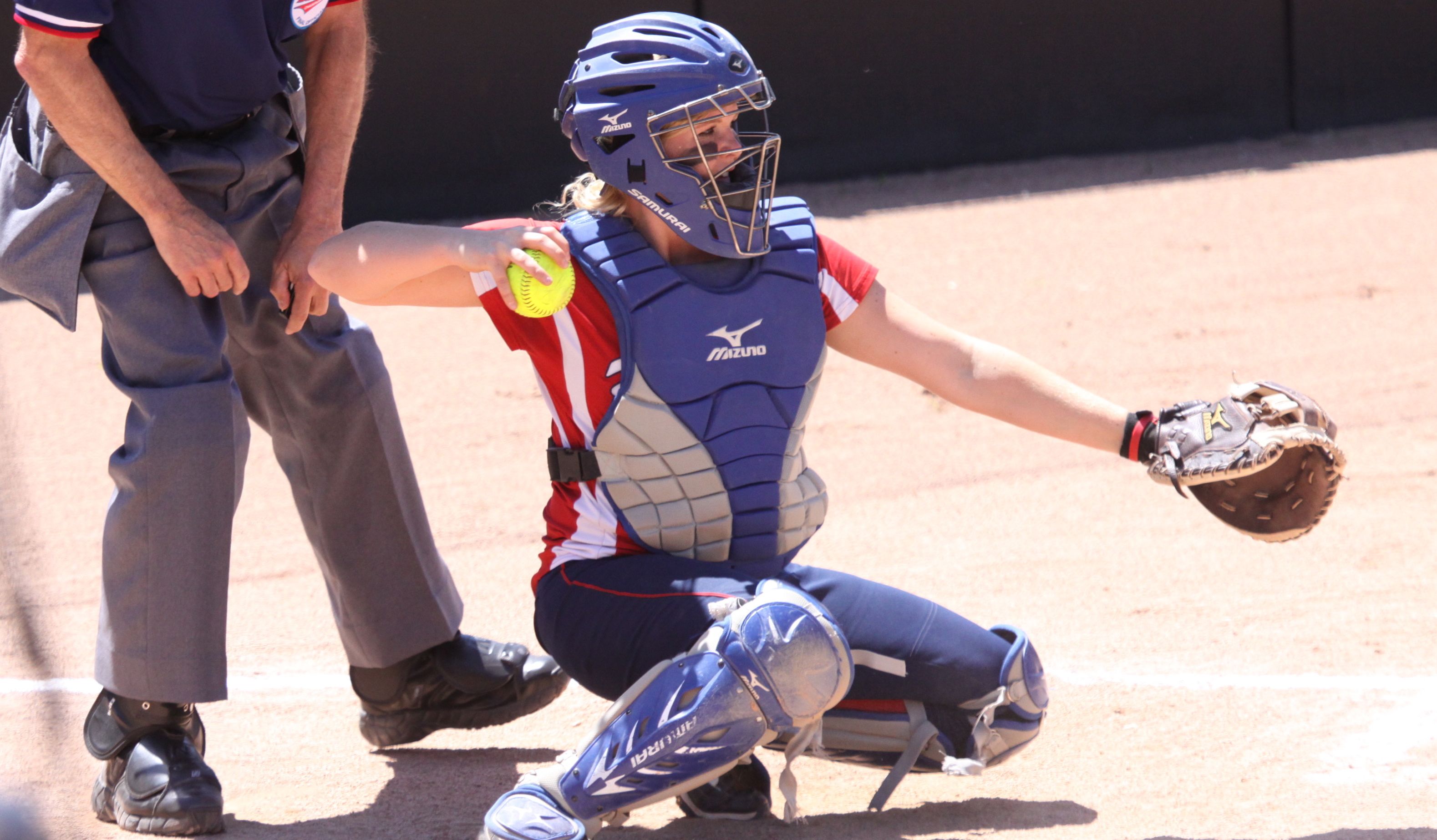 Sharon walked and Strasser hit into a fielder’s choice to advance her to second base in the third inning. Lexi Hongisto then ripped a double to deep right field, allowing Sharon’s pinch runner, Alyssa Polley, to score the go-ahead run.

“She was pitching me inside, and I am not a fan of inside pitches,” Hongisto said. “Then she pitched me an outside pitch, and I just went with it and it felt so good.”

The Patriots had a chance to even the score in the fourth inning when Nicole Bauer got a hit to left field with two outs. Jennifer Winchell singled to left field to put two on base, but Rachel Hahn grounded out.

But after retiring three in order, the Patriots again had a chance to tie or take the lead in the fifth.

Mackenzie Eurich doubled to right field to start the inning, with Camille Mayhew subbing in as a courtesy runner. Hoppe struck out, but Stephanie Nueman smacked a pitch to short right field to put two on base with one out. But Gladstone got out of the inning with a double play.

“Our defense has been solid this year and with Tinner on the mound, we are always confident with Tinner,” Hongisto said. “Tinner always tells us one pitch at a time, not one out at a time.”

Sharon pitched seven innings, giving up eight hits, striking out 12 and walking none.

“We had eight hits. We just couldn’t get the one big one,” Patriots coach Steve Bohn said. “That lineout double play was huge for them.”

Neuman finished with two hits for USA, while Nicole Bauer took the loss on in the circle, striking out two, walking two and giving up four hits. Erica Treiber pitched in relief, striking out seven, walking one and holding Gladstone hitless over the last three innings.

PHOTOS: (Top) Gladstone pitcher Tinner Sharon gave up one run in a complete-game win. (Middle) Unionville-Sebewaing catcher Breanna Dinsmoore had a hit and caught a pair of pitchers who combined on a four-hitter.