PLYMOUTH — Nobody could have known it at the time, but Houghton’s hockey team reached its quota of goals Saturday after only 56 seconds of play.

Sam Evola of Detroit Country Day might give up one goal, but that’s going to be it when he plays at USA Hockey Arena.

Evola closed the door the rest of the way, backstopping the Yellowjackets to their second straight MHSAA Division 3 championship with a 4-1 victory over Houghton.

Named the state’s Mr. Hockey as a junior last season, Evola is one of the most clutch high school goaltenders to come out of Michigan.

When the pressure is at its greatest, Evola has been at his best, stopping 91 of 95 shots for a .958 save percentage in four Semifinal and championship games the last two seasons in Plymouth. He gave up only one goal in each of the four games.

Over 11 games during the two postseason runs, he gave up only nine goals.

So, it doesn’t matter when the goals have come – there usually isn’t going to be another one against Evola.

“There’s a lot of pressure, but you’ve got to stay focused and keep your eye on the puck and keep your head in the game,” Evola said. “You can’t get distracted by what’s on the outside. You’ve got to keep your focus on what’s inside the rink.”

Evola finished with 25 saves after allowing a goal by Seth Francois 56 seconds into the game.

“One of my mottos is you shouldn’t give up a goal in the first minute or last minute of a period,” Evola said. “I didn’t do that. You’ve got to learn from your mistake, correct it and just keep it up. You can’t keep thinking about that goal. It’s going to egg on you and make you worse; you’ve got to bounce back.”

Country Day (24-4-2) has won back-to-back MHSAA championships after ending a 37-year drought last season. After winning only one Regional in 26 years, the Yellowjackets have become a force in Division 3, winning four straight Regionals.

To hear eighth-year coach Frank Novock describe the evolution of his program, the current players are the beneficiaries of what was built by players from his earlier teams. 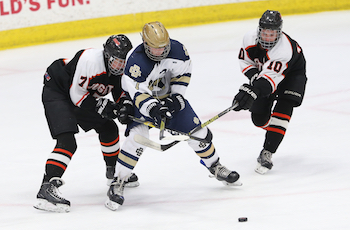 “The guys who came before these guys, the captains, we didn’t have the greatest win-loss records, but the bar was set to a high standard,” Novock said. “It’s on cruise control with the leaders and seniors I have, and the same thing with the years past. It’s not always easy, it’s not always fun, but when you put that sweater on here, you’re going to have to be part of it or you’re going to be gone. These guys have continued to carry the torch. I can’t thank the guys enough that came before to set the example. We’re building in the right direction.”

The Yellowjackets regrouped after Houghton took its quick lead, tying the game 1-1 on a goal by Lucas Krol with 1:37 left in the opening period.

Dallas Hood scored what proved to be the winning goal, skating left to right across the slot and putting a shot inside the far post with 1:20 left in the second period to make it a 2-1 game.

The Gremlins (23-6-1) had a five-on-three power play for the first 1 minute, 26 seconds of the third period. Not only did they fail to capitalize on the two-man advantage, but they allowed a goal at the 2:01 mark to Mickey VanAntwerp.

“The biggest turning point in the game was we didn’t score on the five-on-three,” Houghton coach Corey Markham said. “We had a couple good looks and just missed. Very shortly after, they scored to make it 3-1. That was a huge point in the game. We didn’t quite recover and get enough offensive push after that point.”

Krol sent his second goal of the game into an empty net with 52.7 seconds remaining to end the scoring.

Houghton was attempting to win its first MHSAA championship since 1982. The Gremlins have lost four times in the championship game since then.

“It’s a once-in-a-lifetime thing,” Houghton senior defenseman Kevin Bostwick said. “Our community is just so special. They’re always behind us. It hurts really bad not to bring this one home to them.”