Special to Second Half

BATTLE CREEK — Hannah Leppek pitched a one-hit shutout Friday, not an easy achievement against a hot-hitting softball team playing on the opposite side in an MHSAA Semifinal.

Yet the Bay City Western junior wasn't thrilled with her performance, which just reaffirms that the great ones all have a bit of a perfectionist streak in them.

Leppek struck out eight but walked five and hit a batter, as Western beat Garden City 1-0 in Division 1 at Bailey Park.

The Warriors won on a walk-off sacrifice fly by senior Hannah Batschke.

"Actually, I didn't feel that my pitching was on, but it was good enough to obviously get the win," Leppek said. "Tomorrow I can tell you it will be on. It's going to be a big game.

"I have higher standards for myself. I just felt like my pitches weren't moving as much as they usually were, and I wasn't as accurate as I usually am. In my opinion, it wasn't a perfect shutout."

Her 19th shutout of the season put Western in the MHSAA Final for the first time and against Mattawan, which beat Romeo 3-2 in the other Semifinal.

"It's surreal," Leppek said. "I feel like it hasn't hit me yet, the immensity of it. I feel like next week I'll wake up and it will hit me: 'Oh, I was in the state championship game.'"

Western coach Rick Garlinghouse concurred that it wasn't a vintage performance by Leppek.

"She normally doesn't walk five, and she gets a few more strikeouts than that," he said. "What I'm proud of is she kept her focus, and she was still able to give us a chance to win the game."

Leppek pitched out of a bases-loaded two-out jam in the sixth when she got Julene Pummill to strike out swinging at a high pitch.

Western's best chance to score before the seventh came in the second inning when Pummill ran down a fly ball heading for the gap in right-center off the bat of Batschke with two outs and a runner on second.

The winning rally began when Kelsie Popp led off the seventh with a double. Ashtyn Decatur reached on an error on a bunt attempt and advanced to second. With the outfield drawn in, Batschke hit it deep enough to force left fielder Allie Lynn to backpedal to make the catch, giving her no chance of throwing out Popp at the plate.

"I just want to go out and make my team proud, no matter what we do," Batschke said. "I just go out every at bat like it's an average game, not any big game or anything. I'm relaxed. It sounds bad, but I really do bad under pressure. So I just go out and have fun."

The Wildcats reached the championship game for the third straight year on the strength of a three-run fifth inning.

Romeo took a 1-0 lead in the top of the fifth before Mattawan erupted for the winning rally. 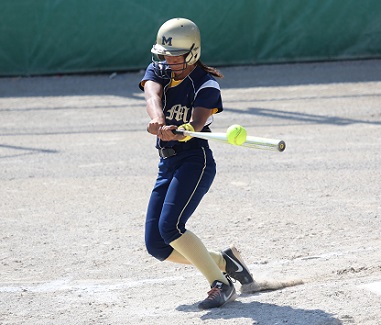 Emma Toner started the inning by reaching base on an error, then scored the tying run on an error. A single by Kyla Nickrent broke the tie, and a double by Abby Stoner made it a 3-1 game.

"Sometimes it's just the second or third time through the lineup that it will happen," Mattawan coach Alicia Smith said. "I knew it was going to happen, because we put base runners on in every inning but the fourth. They were there in scoring position. We were just one hit away from breaking it open. It was just a matter of time."

Romeo scored a run in the sixth, but was set down 1-2-3 in the seventh by Allie Havers. Havers allowed only three hits, struck out 10 and didn't issue a walk.

Mattawan won the Division 1 title two years ago, outscoring three opponents by a combined 27-0 in the final round, before losing 2-1 to Hudsonville in last year's title game.

"In 2011, it was fairly easy for that group," Smith said. "They breezed right through the tournament and never had any close games. These kids have to battle every game, every inning, every pitch. It makes it very special."

PHOTOS: (Top) Bay City Western rightfielder Madison Brewer holds up the ball as evidence off a catch in the Warriors' 1-0 win over Garden City. (Middle) A Mattawan hitter makes contact during the Wildcats' Semifinal win over Romeo. (Click to see more from Hockey Weekly Action Photos.)