GRAND LEDGE – Christine Wilson remembers losing. It’s something of a distant memory, but sticks with the Grand Ledge gymnastics team’s senior captain to this day.

“When I was a club gymnast, back when I was younger, I was never really good. So it’s not like I didn’t know how to lose,” Wilson said. “I’ve struggled unbelievably. But in high school, I just grew a lot. We’ve won every meet, and I’d like to keep it up.”

Nope, that’s not a typo or misquote. The Comets have won 68 straight meets, be they duals or multi-team events, including the last four MHSAA Finals. And with a line-up young but full of experience, they’re hoping to extend that streak through March 9, the date of this season’s MHSAA Team Final at Grand Rapids Kenowa Hills.

Only Ludington (1975-79) has won five straight MHSAA titles, and the final one of that run was shared. Grand Ledge and Holland (1994-97) both have won four straight over the history of the tournament.

The Comets will find out Saturday how they might stack up as contenders this March. After facing many of the Grand Rapids area’s top teams in winning last weekend’s Grand Rapids Kenowa Hills Invitational, Grand Ledge will head to the Canton Invitational for what lately has been the most competitive regular-season gymnastics meet in the state.

The Comets remain tough to beat, despite Wilson being the only senior in the starting line-up the team used Wednesday in a Capital Area Activities Conference win over Haslett/Williamston/Bath, another returning MHSAA Finalist from a year ago.

Granted, Wilson might be as valuable a leader as any team in Michigan can claim. She’s the reigning MHSAA Division 2 individual champion, and this season is competing in Division 1 with the aspiration of becoming – Comets coach Duane Haring believes – the first gymnast to win both Division 2 and then Division 1 individual titles. 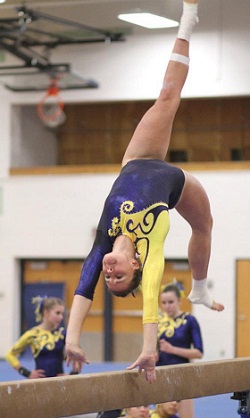 But she’s also just one of four on her team who have posted all-around scores of at least 37.35 this winter. Sophomore Presley Allison and juniors Lauren Clark and Sara Peltier all have done the same after finishing third, eighth and 12th all-around at last season’s Division 2 Final.

A number of others also are contributing, led by sophomore Taylor Stevens and freshman Hailey French, who both have posted all-around scores pushing 34.

It’s something of the same old story for the team under the guidance of Haring, who after much cajoling from his gymnast daughter Allison and her teammates took over the program in 2002. They told him at the time that no one at Grand Ledge knew the gymnastics team existed, down to not having a trophy case of its own.

He led the Comets to their first MHSAA Team Final that season, and the team has been filling a new trophy case for a decade. He stepped away to work as an assistant coach at Michigan State from 2005-06, but returned for 2006-07 and that season brought Grand Ledge to within 1.625 points of its first MHSAA championship before the Comets started the incredible winning streak the next winter.

Haring meets with his team before the season in a room at the school, or sometimes they just sit in a hallway. He starts with, “We’ll, we’ve been pretty successful the last couple of years. Wherever you want to go this year is up to you.” If they want to do just a little gymnastics and have merely a decent season, he’s fine with that and will coach them to that level. But if they want to pursue another championship, it’s going to be tough and so will his coaching style.

They’ve always responded that they want to be the best they can.

“A couple of times the last couple of years, when we were dragging, I’d say, ‘Ladies, at the beginning of the year I asked you where you wanted to go, what your goals are. There’s no turning back now,’” Haring said. “I let them set the expectations. They’re not set by me.”

Expectations are high, but so is support. Former Comets’ standout Kelli Maxwell continues as an assistant, and a number of Grand Ledge gymnasts past are regulars helping out with other tasks or just cheering the team on.

The pressure is high too. No one wants to be on the team that breaks the streak. But so far that’s been more of a motivator than distraction.

“It’s really hard especially when you’re the only senior captain, going for the state title, and undefeated,” Wilson said. “If you’re that person who has a loss or who falls at the state competition, it’s a big burden.

PHOTOS courtesy of the Grand Ledge gymnastics program.
TOP: Comets junior Lauren Clark finished eighth at last season's Division 2 Individual Final and is among Grand Ledge's most experienced contributors this winter.
BELOW: Senior Christine Wilson is the reigning Division 2 individual champion and hopes to claim the Division 1 title next month.