Dean Holzwarth
Special for Second Half

GRANDVILLE – Grandville has had one of the elite competitive cheer programs in the state since the sport became MHSAA-sponsored in 1994.

Six championships in Division 1/Class A and eight runner-up finishes over the past 21 years provide undeniable proof of the program’s success under longtime coach Julie Smith-Boyd.

Grandville enters this season as the defending Division 1 champion after notching a narrow victory over another perennial power, Rochester, at last season’s MHSAA Final. It was the Bulldogs’ first title since 2011.

Smith-Boyd, in her 35th year at the helm, said a key to last year’s run was a commitment to conditioning and weight training.

“Last year was the first year that we lifted throughout the season,” Smith-Boyd said. “We have lifted in the past, but once the season started we stopped. It was amazing to me how much stronger they were at the end, and now that we’ve been doing it for over a full year they are so strong.”

The hiring of strength and conditioning coach Tully Chapman has made a world of difference to not only the competitive cheer squad, but other sports at Grandville.

“Everything is so much better and stronger, even with their tumbling,” Smith-Boyd said. “They are showing more athleticism, and it has benefited us so much. The lifting has made them more mentally tough, to get through some things that they didn’t think they could do. We are doing some hard things this year and really mixing it up.”

The added element to the program, combined with the return of several key performers, has the Bulldogs primed to duplicate last year’s accomplishment.

“We’re not as experienced as last year’s team was, but they looked amazing in Rounds 1 and 2 at the first meet at Comstock Park,” Smith-Boyd said. “I looked at the scores and they were almost identical to the same time last year. We do have the target on our back, but I just want them to do their best.”

The Bulldogs are vowing not to be satisfied with last year’s memorable feat.

Vredevoogd, one of eight seniors, echoed those sentiments. She said the team understands the challenges awaiting it in defending the title. 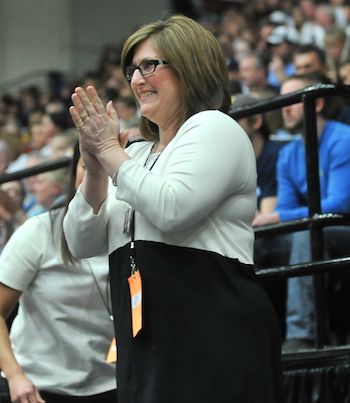 “We talked in practice how for teams that didn’t win last year it’s almost easier to reach for it because there is something to strive for,” she said. “It’s almost harder to stay at the top, so our focus is to work hard to stay there instead of taking steps back. We have girls back who know what the state finals felt like, and the girls from the JV have jumped right in. We’ve hit the ground running.”

Within the program, expectations never change. Smith-Boyd doesn’t allow it.

“I don’t really lower the bar; I just don’t,” she said. “And the girls coming up know that. The bar keeps going up and up the more talented and the more skilled they become. They just rise to the occasion, and we keep getting girls to come out for it. They work so hard, and I really like this group.”

The tradition of the program motivates each team member. They don’t want to disappoint previous teams and are focused to live up to the high standards.

“A lot of the alumni will come back, especially during state week, and they will talk to us about their experiences,” Vredevoogd said. “It just motivates us to carry on what they’ve built up, and especially Julie. There is a lot to be proud of and a lot to be excited to be a part of.”

Said Weir: “I feel like we always have the pressure, only because we’ve always had so many teams in the past that have been really good so we all feel like we have to be like that.”

A close bond also has formed among this year’s group.

“We all love each other and love to be around each other,” Weir said. “We’re a family, and being at practice is fun.”

While the opportunity to contend for another MHSAA title would be ideal, Smith-Boyd simply hopes for the best from her team.

“That would be super cool, but if we don’t get it I want them to have a great year,” Smith-Boyd said. “For it to be exciting, memorable and fun.”