GRAND RAPIDS – Jasmine Martinez doesn’t remember much of what she and her teammates performed during their three rounds on the DeltaPlex mat Friday.

But the Grandville senior has a pretty good idea what she’ll see when she re-watches this season’s MHSAA Division 1 Competitive Cheer Final.

“I think our hearts on the line,” Martinez said. “We just knew we had to do it for each other, for the legacy we had and for the coaches who pushed us harder than we ever thought we could push ourselves.”

Grandville pushed all the way to its first MHSAA title since 2011 and sixth championship in school history.

The Bulldogs first had to push past an early deficit to 12-time champion Rochester, but posted the Final’s high scores for Rounds 2 and 3 to edge the Falcons 786.80-785.34 when the overall scores were tallied.

The close win went well with a close loss to Southgate Anderson at last season’s Final, where Grandville finished runner-up by a mere 2.42 points.

“We have 12 seniors on the team. All of us were at State last year, and we knew what it was like to come that close and have it taken away from us,” Martinez said. “That fueled us all season. From Feb. 28 last year, when we lost, we said we will be state champs March 6, 2015.”

The top four teams Friday were separated by fewer than three points. Rochester Hills Stoney Creek was third at 784.28, and Lake Orion finished fourth at 783.84. 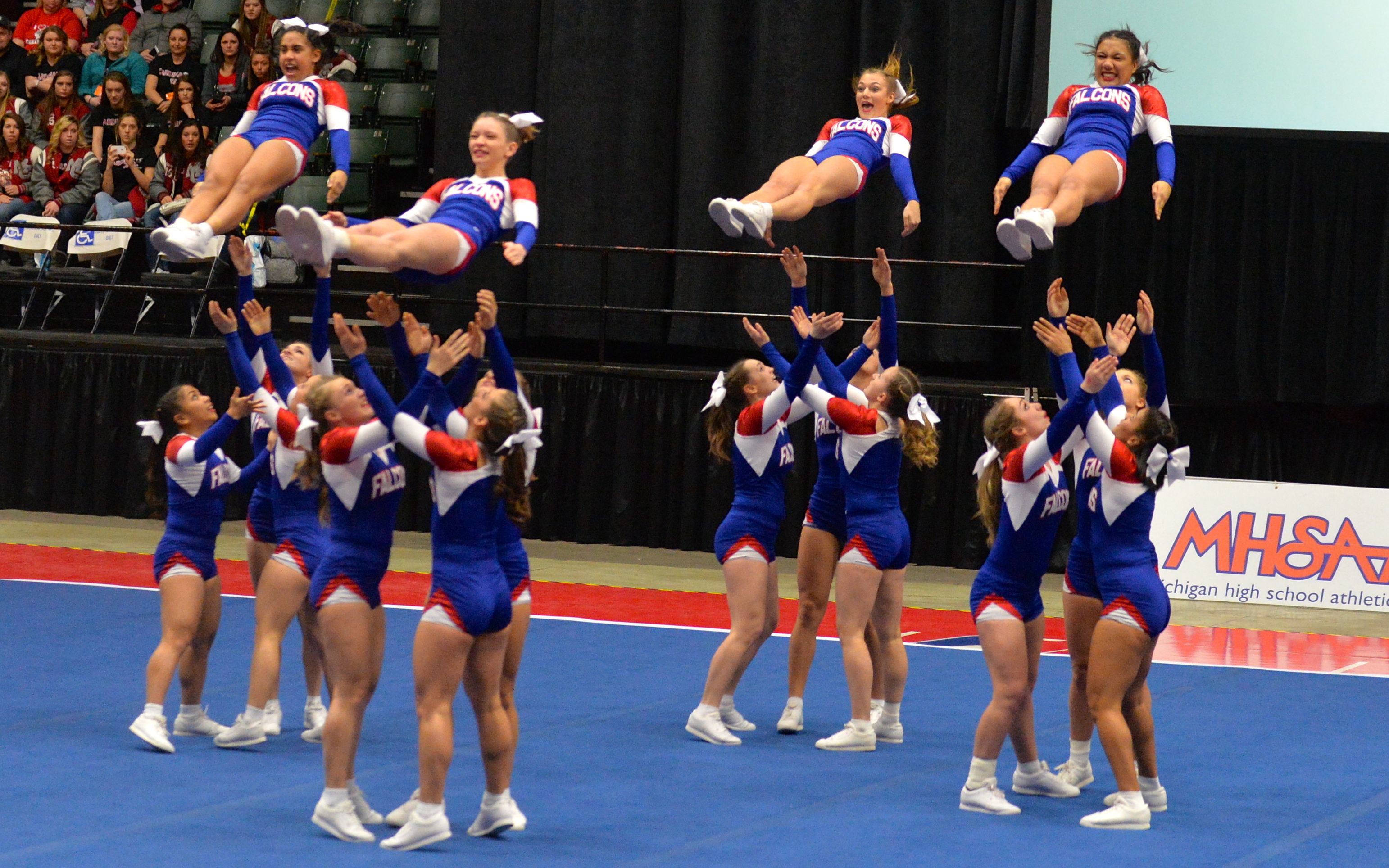 To finish atop such a close, competitive field took a little something extra special. And Grandville coach Julie Smith-Boyd said this team was unlike any other during her 34 years running the program.

The Bulldogs were healthy throughout the winter, allowing them to be strong early and begin fine-tuning their routines in January to eliminate the errors that could’ve shaved valuable tenths of points off their scores.

But Friday took more than skills.

“We had an intangible thing, fire, heart, I don’t know,” Smith-Boyd said. “It was inside them. They were just so determined. I’ve never had a team quite like this before.

“We’ve won six times, and every one is special. But to see them have that almost out-of-body experience, that sounds weird, but I just never really felt that like today.”

Unlike last season, when Grandville was tied for first after Round 1, the Bulldogs trailed Rochester by 1.3 points at that point Friday.

Rochester entered the Final having posted the highest scores in Division 1 this season in all three rounds. But Grandville posted a 230.40 to lead Round 2 on Friday while Rochester came in at 228.84, and the Bulldogs then tied Rochester’s division-best Round 3 score with a 321.00 to finish the meet. The Falcons scored 319.80 in Round 3 to secure second place.

“We really struggled in Round 2, which was a shock to us. That round usually is not a problem, but it was nerves I guess,” Rochester coach Susan Wood said. “We know we were close, but we know that we should not have won. We didn’t have the three rounds that we had (winning) at Regionals and Districts.”

Few know what it takes to be in the championship mix as much as Wood, who also finished her 34th season and has led Rochester to 12 MHSAA titles. The Falcons didn’t make the Finals a year ago, making Friday’s runner-up finish that much more satisfying.

Grandville also experienced a stretch of tough times in 2013 on the way to finishing runner-up last season, including the deaths of two athletes’ mothers that fall after fights with cancer and the deaths of two classmates a year ago this week.

“It’s just special to see them get through it and grow from it,” Smith-Boyd said. “It was amazing.”

PHOTOS: (Top) Grandville takes the mat during Friday’s Division 1 Final at the Grand Rapids DeltaPlex. (Middle) Rochester performs its routine during Round 3.